Did this Real Estate Gauge Just Take Another Step Backwards? 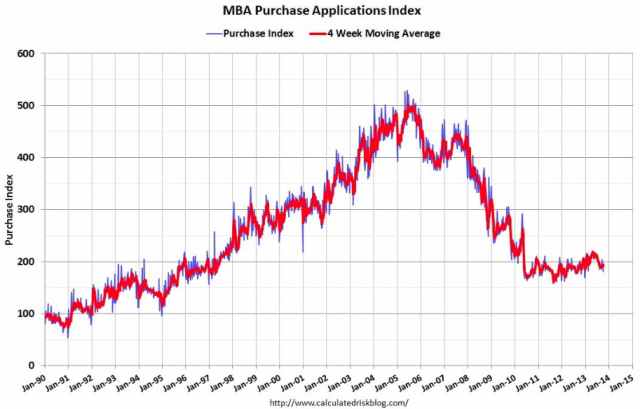 According to the Mortgage Bankers Association’s latest report, for the week ended November 1, loan applications plunged 7 percent on a seasonally adjusted basis from one week earlier, the 18th drop in only 26 weeks. That followed a gain of 6.4 percent in the previous week. The figure includes both refinancing and home purchase demand and covers more than 75 percent of all domestic retail residential mortgage applications.

The industry group’s refinance index fell 8 percent from a week earlier. Overall, the refinance share of mortgage activity accounted for 66 percent of total applications, which is 1 percent lower from a week earlier and 9 percent above its lowest level since April 2010. The seasonally adjusted purchase index declined 5 percent to reach its worst level since the end of December 2012.

While interest rates are near historic lows, affordability is near its worst level in about five years due to surging home prices. In September, home prices across the nation increased on a year-over-year basis for the 19th consecutive month. According to CoreLogic, a property information and analytics provider, home prices jumped 12 percent in September from a year earlier. In fact, home prices have posted double-digit gains for eight straight months.