Do Oil Companies Deserve to be Forgiven For Environmental Disasters?

When the Deepwater Horizon oil rig exploded in the Gulf of Mexico in 2010 and set off a massive oil leak that lasted for 87 days, it didn’t seem as if petroleum giant BP would ever escape the shadow of bad publicity. Dozens of business owners in the fishing and tourism industries affected by the spill lined up to claim losses, and the nation was flooded with photos of oil-laden beaches, birds, and waves. But after five years, it seems as if BP has been able to turn a bit of its bad press around — which is good news for other companies now attempting to fix similar problems.

Executives at Plains All American Pipeline are getting a taste of BP’s publicity nightmare after one of its pipelines broke May 19 near Santa Barbara and gushed an estimated 105,000 gallons of crude oil onto the coastal bluffs and into the Pacific Ocean. The spill endangered wildlife in the area and the investigation into the cause of the pipeline rupture is just beginning. Plains, a Texas-based company, will have its work cut out for it to restore even a moderate public image, especially if the investigation shows the pipeline should have been replaced earlier or if there is proof of negligence.

It’s not the first time an oil company has faced this type of disaster that fuels an ongoing stream of negative publicity. Though litigation is far from settled in the BP case, the company has shown there is a chance to remold its image even following the worst oil spill in U.S. history. In fact, BP is being credited with helping to revive a struggling economy on the Gulf Coast. However, the question is whether these efforts truly deserve accolade, or if it’s simply a requirement of their industry in the first place.

According to the Associated Press, BP has spent about $236 million to propel tourism efforts in coastal towns within Texas, Florida, Alabama, Louisiana, and Mississippi. Much of that has come in the form of tourism grants awarded to the individual states. BP spokesman Jason Ryan told the AP that the company awarded $179 million in tourism promotion grants, and the company itself aired commercials all over the country to promote the region as a whole. (The company hasn’t released how much it spent on those particular advertising spots.) In some cases, the advertising helped to remind people that Mississippi and Alabama even have coastlines that border the Gulf, the AP reported. 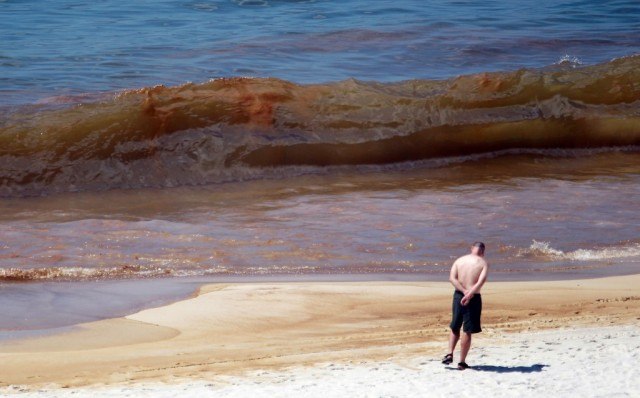 “I’ve traveled as recently as the spring to California and there were people there who were saying, ‘Hey, I saw those commercials about Alabama,” said coastal condominium developer Bill Brett. “I really think those commercials helped.” According to the AP’s report, Brett’s business is up about 30% compared to the year before the oil spill. Brett is one of the people who received settlements from BP following the spill after proving the disaster was a detriment to his business. With the $37 million settlement he received Brett finished one of his 19 condo buildings, which in total include more than 3,200 units.

BP’s publicity recovery needed to address several aspects. First, it needed to stop the leak, which poured what the court has found to be 3.19 million barrels of oil into the water. Then it needed to address both governmental and civil litigation, most of which is still ongoing. In September 2014, BP was found grossly negligent for the spill, which means it could be liable for maximum penalties under the Clean Water Act — fines that could be as high as $18 billion. In total, the company is said to have set aside $43 billion for the entire disaster. The company also reports that as of December 2014, it has spent more than $14 billion and company employees have spent more than 70 million work hours devoted to cleanup efforts in the Gulf of Mexico.

In light of that, $236 million seems like a relatively small amount. But to the people whose livelihoods were affected by the spill in numerous ways, it’s helping to restore the company’s image. Ted Scarritt, who had bought a tourism sailboat just months before the spill in 2010, couldn’t operate his catamaran that summer off the coast of Alabama. But now, Scarritt told the AP, it seems like a distant nightmare. “We’re just amazingly thankful,” said Scarritt. “I think our area has recovered profoundly. You can look at the water right now, you can look at the beach. We’re fine.” On top of the tourism grants and advertising slots, part of the payouts went to private companies and governments to promote seafood and other area industries.

BP launched its own website called The State of the Gulf that continues to update the public about ongoing cleanup efforts and the company’s reactions to court rulings related to the spill. In all of this, it’s conceivable that BP wouldn’t be pouring money into cleanup efforts or boosting tourism in the Gulf states if they didn’t receive some sort of positive feedback. If local residents can start to forgive the company, perhaps the rest of the world can forget about it, too. But there’s one main reason the company shouldn’t necessarily be receiving accolades for contributing funds that some people might think are above and beyond.

BP isn’t going above and beyond

In essence, the cost of drilling oil has potential side effects that were maximally highlighted during the spill. BP might sell a barrel of oil for $110 (if the oil market is doing really well — right now it’s more in the $50-60 range). But the true cost of what it means to produce that barrel is much higher if you take into account the social and environmental effects it has. This is what’s called an externality — when producing something like oil imposes a cost or benefit that isn’t reflected in the price of each barrel. In other words, BP might be doing the “right” thing by spending money to revive the tourism industry. But they shouldn’t really be getting a lot of extra praise for it, because it’s been part of the true cost all along.

In this case, BP had to spend money on the back end because the company didn’t spend it ahead of time to make sure that equipment was fully functional, crews were adequately trained, and contingency plans were in place in case of disaster. To be sure, BP probably would have taken steps to prevent the disaster had it known one was imminent. But these are steps that all companies should be taking well ahead of time — especially if they’re in the fossil fuels industry. Instead of reactionary spending, the money should be put into preventive causes in larger quantities. It will likely be months until it’s determined whether Plains is at fault for the spill in California, or if it was an unfortunate freak accident. But in the case of BP, the courts have decided that the company didn’t do all it could have up front to make sure that hundreds of thousands of gallons of oil didn’t start seeping into the Gulf on a daily basis.

BP should absolutely be paying its reparations, and making it right with the locals who were harmed the most in the wake of the spill. But instead of waiting for disaster to strike, BP, Plains, and companies like them should be focused more heavily on the front end. To BP’s credit, its 2014 annual report continues to focus on new initiatives that it claims have made the company safer and more responsive to potential safety threats within its operations, which started in 2011. Spending that time and money ahead of disaster probably won’t garner the same amount of positive attention as PR-led donations after a disaster. That prevention also probably costs more than $236 million. But it’s better-deserved praise than that earned by shelling out money for reactionary causes that might have otherwise been avoided.