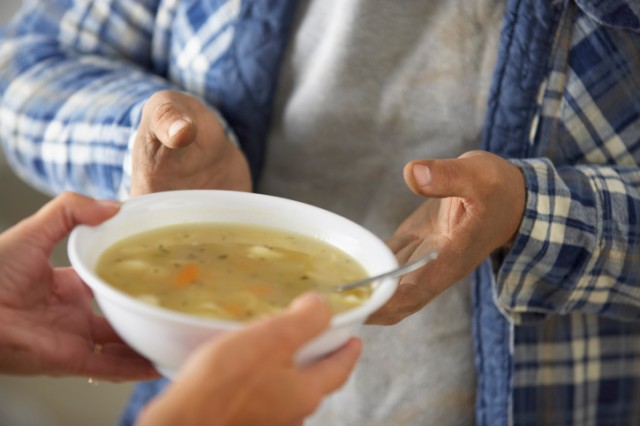 In spite of all of the data indicating consumers receiving public assistance spend significantly less money on food, clothing, housing, transportation, entertainment, and healthcare than those who are not on assistance programs, criticisms of public assistance are still fairly prevalent among our culture. “People on welfare should have to pass drug a test, just as I do to obtain my job and paycheck” or “they abuse the system” are some of the common criticisms you may hear about those on welfare or even those on unemployment.

Do some recipients of welfare and unemployment probably abuse the system? Of course. But this is the exception, rather than the rule. A CBS Local publication articulates it rather well, saying that, “The majority of people who are on welfare are able-bodied and want to work, however, they cannot find stable employment. Still, many work irregular, low-wage jobs in between receiving welfare.”

It’s not only welfare recipients that we criticize, either. When we see someone on television make a bad financial decision, we may think about how we’d “never make such a decision.” When someone we know makes an extremely exorbitant or frivolous purchase, we may think about how we’d “never spend that much money on something like that.” We are a society that judges others, and because money intrigues us, we are quick to judge other’s finances.

Hardship is more common than we think

Many of us, however, have experienced (or will experience) financial hardship at some point during our lives. Late last year, the Associated Press discovered that a shocking 80 percent of Americans — at one point or another during their lifetime — struggle with joblessness, low-income that is near poverty, or reliance on welfare. Therefore, odds are, you have gotten to know what financial hardship feels like, or you will learn what such hardship feels like at some point. If you are fortunate enough to be in the small group of people who will not have personal experience with such hardship, someone close to you, like a family member or close friend, will likely experience financial struggles.

Wider Opportunities for Women (WOW) found that as of last year, 45 percent of U.S. residents — 39 percent of adults and 55 percent of children — live in households where economic security is lacking. Households with two full-time workers or those households headed by someone with a college degree are more likely to be financially secure.

What is economic insecurity?

An economically secure household can make ends meet while having  enough funds for essential forms of savings, like retirement and emergency savings. Researchers use indices like the BEST (Basic Economic Security Table) index to evaluate individual and household financial security.

“The BEST provides a common understanding of what it takes to make ends meet and truly escape the shadow of poverty. Using data from government and industry sources, the BEST Index reflects the actual costs of basic goods and services American workers require to meet health, safety, and work needs: housing (rent), utilities, food, healthcare, transportation, childcare, and essential household items such as clothing, cleaning supplies, and a telephone.”

The BEST index also includes emergency and retirement savings, as financially secure households need these savings to thrive. The index does not, however, include “wants” like electronics, entertainment, money for eating out, or vacation money.

Economic insecurity results when the amount a family needs does not match up with how much they actually bring in. For one average U.S. worker to be financially secure, the best index looks like this: 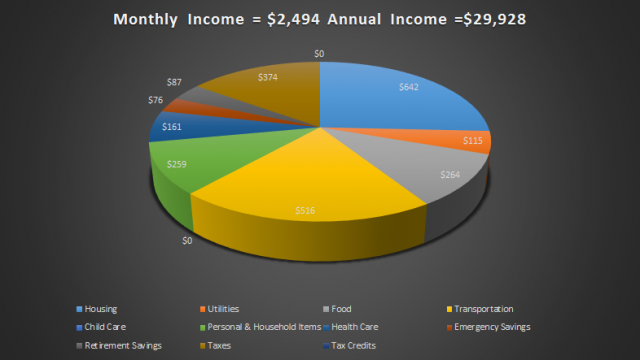 Many U.S. workers earn under this amount. According to the Social Security Administration’s 2012 wage statistics, “by definition, 50 percent of wage earners had net compensation less than or equal to the median wage, which is estimated to be $27,519.10 for 2012.”

For those who live in more expensive areas, like New York City, the amount needed to be financially secure rises to nearly $39,000 for one single worker. For the average family of four with two school-aged children, the chart looks more like the one below. Again, those living in more expensive areas are looking at even higher income requirements to be considered financially secure. 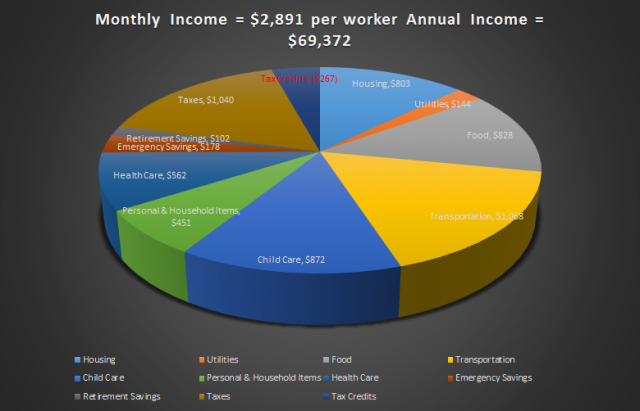 With the median household income barely reaching over $50,000, many households with children do not earn this level of income either. Looking at income needs like these, it’s no surprise that so many consumers have high levels of debt and not enough retirement savings.

At the end of the day, financial security is a fragile thing that we should not take for granted, nor should we judge others for not yet reaching.