Does General Motors Have a Bright Future?

With shares of General Motors (NYSE:GM) trading around $36, is GM an OUTPERFORM, WAIT AND SEE, or STAY AWAY? Let’s analyze the stock with the relevant sections of our CHEAT SHEET investing framework:

General Motors CEO Mary Barra said this morning she fired fifteen people who either were incompetent or irresponsible in their actions involving fatally flawed ignition switches that are blamed for thirteen deaths in crashes where airbags failed to inflate. She took the action after an internal report she commissioned, conducted by former U.S. attorney Anton Valukas. She said the the Valukas report “is enormously painful” and details “fundamental failure” by GM in dealing with safety issues in years past. It found, she said, “no conspiracy” within the company to cover up a deadly inginotn switch defect that is linked to 13 traffic deaths and has resulted in the recall of 2.6 million 2003-2011 small cars worldwide. The Valukas report shows a pattern of “Incompetence and neglect” and discloses that “numerous individuals” failed to act to fix the switch instead of “finding ways to protect our customers.”

“I hate sharing this with you as much as you hate hearing it,” she told 1,200 GM employees assembled at the company technical and engineering center in Warren, Mich. The 15-minute speech, marbled with references to her pride in GM and its high-quality workforce, was broadcast live to other GM employees located elsewhere. Barra told a U.S. House committee on April 1, during tough questioning, that she had hired Valukas “to conduct a thorough and unimpeded investigation of the actions of General Motors. He has free rein to go where the facts take him, regardless of the outcome. “The facts will be the facts. Once they are in, my management team and I will use his findings to help assure this does not happen again. We will hold ourselves fully accountable.” Valukas led a similar inquiry after the 2008 collapse of Lehman Brothers. GM on May 16 agreed to pay the maximum fine, $35 million, because it failed to tell the National Highway Traffic Safety Administration within five business days after determining the switches were a safety defect. It also agree to “unprecedented oversight” by the government of its safety processes and agreed to turn the entire Valukas report over to Congress and NHTSA. Barra had fought to keep some parts of the report confidential.

General Motors stock has struggled to make positive progress in the past several years. However, the stock is currently surging higher and looks poised to continue. Analyzing the price trend and its strength can be done using key simple moving averages. What are the key moving averages? The 50-day (pink), 100-day (blue), and 200-day (yellow) simple moving averages. As seen in the daily price chart below, General Motors is trading above its rising key averages which signal neutral to bullish price action in the near-term. 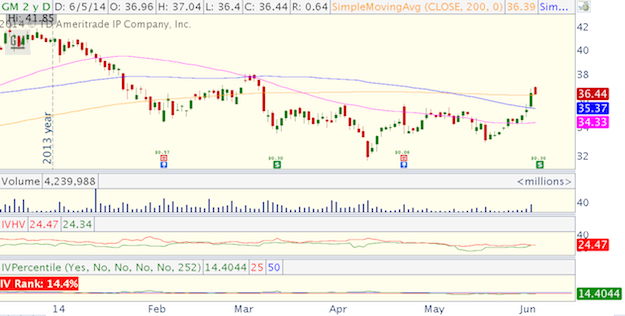 General Motors has seen decreasing earnings and increasingrevenue figures over the last four quarters. From these numbers, the markets have had mixed feelings about General Motors recent earnings announcements.

General Motors continues to change its business as it looks to entice companies and consumers with its new and improved vehicles. The company CEO Mary Barra said this morning she fired 15 people. The stock has struggled to make positive progress in the past several years, but is currently surging higher. Over the last four quarters, earnings have been decreasing while revenues have been increasing, which has produced mixed feelings among investors. Relative to its peers and sector, General Motors has been a poor year-to-date performer. WAIT AND SEE what General Motors does this quarter.