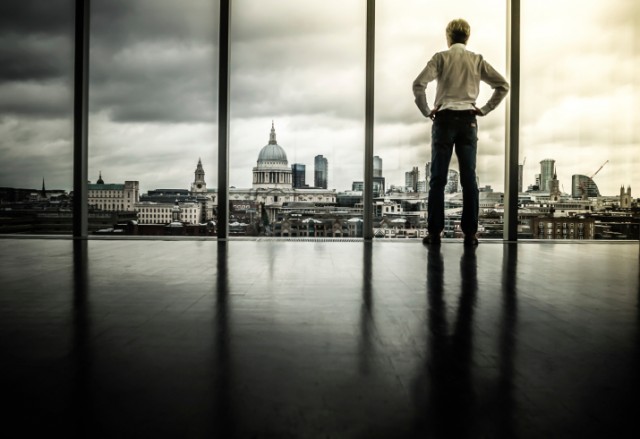 Ask the average American how they feel about the future, and you’re likely to get a mixed bag of answers — many involving the president, some expressing worry about ISIS or Ebola, and others delving into the inner-workings of the economy. Chances are, Americans are likely going to get along just fine in the near-term, despite prevailing pessimism from some. However, that outlook may be a lot brighter depending on what country you live in.

Those are the findings of recent research released by the Pew Research Center, that basically says emerging, poorer countries have a much brighter vision of the future than rich nations do. To reach that conclusion, Pew conducted a survey spanning 44 countries and involving more than 48,500 individuals between March and June of this year. The report’s main focus was to examine the differences and similarities between the world’s economies, which led researchers to discover that the current state of a nation’s economy says a lot about its collective feelings about the future. Also, the general region of the world in which a country is located plays significantly into those feelings as well. 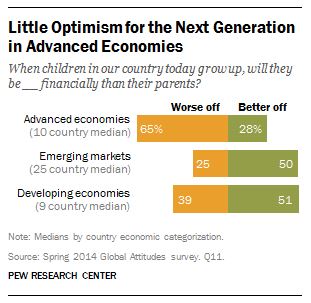 These findings do make sense, as it simply boils down to an examination of who has the most to lose. Obviously, advanced economies like the United States have a lot to lose if economic conditions take a turn for the worse. Emerging markets, already with a bit of momentum, have everything to gain. Developing countries, on the other hand, can obviously identify more with emerging countries, as they too have more to gain as their economies come together in the years ahead. 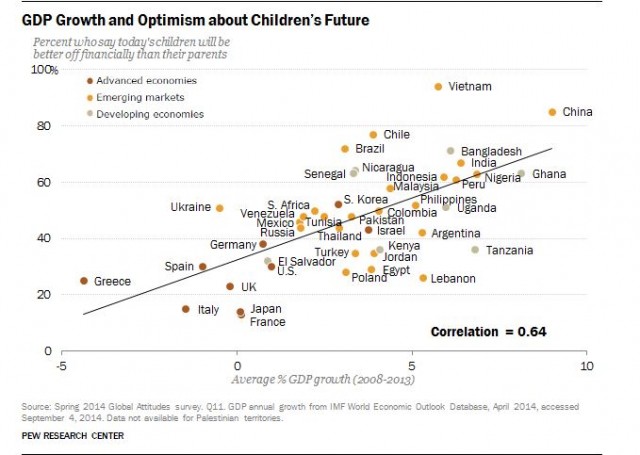 Some examples of rapid change in optimism levels were identified throughout the study as well. For respondents from the African nation of Uganda, 51% of those asked said they feel optimistic about their children’s future, as opposed to 39% just the year prior. Several other African nations saw a similar phenomenon, including Senegal, South Africa, and Egypt. A couple of European countries were in the same boat, notably the UK and Germany.

What has been changing people’s minds? Not surprisingly, it’s because their economies have picked up traction lately. The relationship between optimism for the financial future of children and strong economic growth has been shown to have a strong correlation, as demonstrated in the chart above. Emerging markets like China and Vietnam are the most stark examples of this relationship, both having shown strong growth in GDP along with growing optimism. On the opposite end of the spectrum, European nations like Greece, Italy, and Spain are seeing the opposite effect.

Some other interesting findings from the study include that there is generally widespread support for free market systems across the globe. The global median of 66% say that life is better in a capitalistic system, despite the negative effects concerning inequality. Naturally, the support is strongest in emerging markets.

Finally, education is widely considered to be the best step in achieving success by a majority of those asked. Other factors that respondents were presented with included things like hard work, giving bribes, gender, and even luck. Unsurprisingly, education was far and away the winner in the eyes of those polled.

One glaring exception? Uganda: Which views luck as more or less on equal footing with education.

The results of the Pew Research poll confirm what most people probably assumed: That emerging countries are a lot more optimistic about the future than others. However, the vast amount of pessimism from advanced countries is troubling, and it would be interesting to find out what effect that pessimism has on overall behavior.

Could that pessimism translate into behavior that results in the very dwindling economic conditions these people are concerned about? That’s something to take into consideration, although there isn’t any evidence to point to at this time.