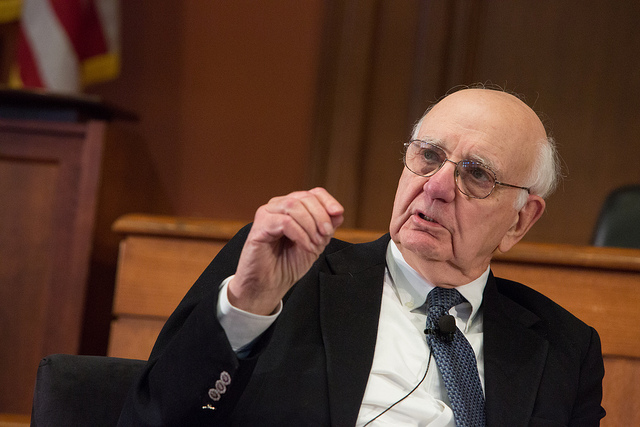 Former Federal Reserve Chairman Paul Volcker made some tough choices regarding monetary policy during his tenure from 1979-1987. His leadership helped improve our economy and, ultimately, set the stage for an equity bull market in the ’80s and ’90s. One of my favorite memories is from last decade when I was fortunate enough to meet Chairman Volcker in person. As kind as he is brilliant, he is also quite candid with his opinion on a variety of issues.

I heard a brief segment earlier this week discussing Volcker’s recent comments about monetary and fiscal policy and found them fascinating. It led me to do some more research on the former Chairman’s current views. I have included links to many of these discussions in this post, but I would like to take a brief moment to address some of his points. Volcker’s recent talk at The Economic Club of New York is succinctly summarized in this Bloomberg article (from which all of the quotes below come), and I strongly recommend giving the brief read a quick look.

In particular, the article mentions Volcker’s sentiment that the Fed “will probably ‘fall short’ by being asked to do too much.” That concern is surely reasonable, though I am not convinced that our current economic situation will play out as some might expect. Rather than predicting outcomes, though, I would like to address a few of the fascinating issues raised in the article from the Chairman’s quotes.

First, the Chairman’s discussion of the Fed’s current legal dual mandate, as set by Congress: “It’s fashionable to talk about a dual mandate, that policy should somehow be directed toward two objectives, of price stability and full employment…Fashionable or not, I find that mandate both operationally confusing and ultimately illusory.”

Perhaps in another post I’ll more fully address current Fed Chairman Ben Bernanke’s statements on this issue but, for now, I will say that I tend to agree with Volcker. It is a controversial issue, and I do not necessarily disagree that a narrower mandate might not solve all of the problems raised by Volcker. For instance, Chairman Bernanke has implied, perhaps correctly so, there are ways for a central bank to still carry out similar policies even if the dual mandate were adjusted.

However, an adjustment might make the Chairman’s testimony to Congress a bit different because of the questions which would be asked by Congresspeople assessing the Fed’s compliance with its legal mandate. Next, it appears Volcker agrees with the Fed’s recent statements that fiscal policy is not carrying its weight when it comes to the necessary balance required for monetary and fiscal policy to ensure an optimal backdrop for economic efficiency.

Accordingly, the Fed may be trying to overcompensate for that fiscal failing. However, the Fed may be limited in its ability to do so, as I addressed earlier this week regarding the monthly missive by PIMCO’s Bill Gross.

“Asked to do too much, for instance to accommodate misguided fiscal policies, to deal with structural imbalances, to square continuously the hypothetical circles of stability, growth and full employment, then it will inevitably fall short,” Volcker said. Those efforts cause it to lose “sight of its basic responsibility for price stability, a matter that is within the range of its influence.”

In addition to the comment about fiscal policy, the most fascinating sentiment to me from the above paragraph is “its basic responsibility for price stability, a matter that is within the range of its influence.”

The reason I find it so fascinating is that the sentiment likely stems from an understanding that, while unemployment is surely an important issue which, obviously, everyone would prefer to have as low as possible, there are limits to monetary policy for both economic and administrative reasons in helping achieve that goal.

Most of the discussion in the posts I’ve highlighted related to monetary and fiscal policy has focused primarily on economic issues.  However, I spent much time addressing administrative issues for some research I was fortunate enough to perform during my graduate legal studies: The Federal Reserve System’s Monetary Policymaking Role in the U.S. Administrative State.

Lastly, Chairman Volcker, more eloquently and efficiently than I ever could, explains why the Fed’s current actions and legal mandate might be ripe for re-evaluation (again, as taken from this superb summary of Volcker’s speech in this Bloomberg article – italics added by me):

“The Federal Reserve, any central bank, should not be asked to do too much to undertake responsibilities that it cannot responsibly meet with its appropriately limited powers.”

He said a central bank’s basic responsibility is for a “stable currency.”

“Credibility is an enormous asset…Once earned, it must not be frittered away by yielding to the notion that a little inflation right now is a good a thing, a good thing to release animal spirits and to pep up investment.”

“The implicit assumption behind that siren call must be that the inflation rate can be manipulated to reach economic objectives.”

“Up today, maybe a little more tomorrow and then pulled back on command. Good luck in that. All experience demonstrates that inflation, when fairly and deliberately started, is hard to control and reverse.”

And if there’s anyone I’m going to listen to when it comes to what the appropriate legal limitations, basic responsibility, and economic capabilities of a central bank are, Chairman Volcker doesn’t seem to be a bad choice.

Jonathan Prober has specialized his academic and practical endeavors on the five pillars of professional services: finance, economics, financial accounting, taxation, and the law. His professional experience includes stints in business and legal services, focusing on wealth management, financial valuation, and corporate strategy. For more, visit Prober’s Playbook or follow Jonathan on Twitter at @jonathanprober.