Does T-Mobile Have a Bright Future?

With shares of T-Mobile (NASDAQ:TMUS) trading around $33, is TMUS an OUTPERFORM, WAIT AND SEE, or STAY AWAY? Let’s analyze the stock with the relevant sections of our CHEAT SHEET investing framework:

The past several months have brought about a cascade of mergers and acquisitions in the telecom industry. Beginning with the announcement that Comcast (NASDAQ:CMCSA) would be merging with Time Warner Cable (NYSE:TWC), the domino effect has been fast and furious. As a Comcast-Time Warner Cable merger would create the country’s largest cable and Internet service provider, other companies needed to mount their own offenses to keep up. AT&T (NYSE:T) proceeded to lock horns and buy DirecTV (NASDAQ:DTV), creating another would-be telecom juggernaut, set to stand up to Comcast. Meanwhile, Verizon (NYSE:VZ), the remaining big player, decided to stick to its current plan and watch the regulatory agencies sort the whole thing out. All of these mergers and buyouts led many to conclude that the age of monopolistic telecom super-companies was at hand, and that most of the smaller companies would need to make drastic moves or face extinction. That logic wasn’t lost on two of AT&T and Verizon’s competitors, T-Mobile and Sprint (NYSE:S), who recently decided that combining forces would be the best idea if their companies wanted to survive.

As Sprint and T-Mobile work on banging out the details of their merger, the question has popped up as to what name the new conglomerate will operate under. It’s been assumed that the company will push forward under the Sprint banner, but it appears that T-Mobile is now becoming the more likely candidate. And there’s one simple reason for it: momentum. T-Mobile, after appointing new CEO John Legere, has been making major waves in the mobile industry with strong campaigns to reclaim lost customers. The company has billed itself as “the uncarrier” and has enacted drastic changes to its business plan, including dropping contracts, launching LTE, and even paying customers to switch over from Verizon or AT&T. So far, the plan has worked: T-Mobile has been able to take a serious bite out of the larger carriers’ numbers.

According to Ad Age, T-Mobile was able to recover 4.4 million subscribers in 2013 thanks to aggressive campaigns targeted at both AT&T and Verizon. The company has also been vaulting up the ladder in consumer perception surveys, pulling itself even with Verizon and ahead of both Sprint and AT&T. Signs are pointing toward a T-Mobile name following the merger’s completion, which is expected to come with a price tag of $32 billion. Sprint is on the paying end of the deal, and in what appears to be an odd turn of events, would actually be purchasing the right to forfeit its name in lieu of T-Mobile’s. The fact is, consumers are excited about what T-Mobile is doing. The company is shaking up the industry and taking big shots at the larger companies. People love an underdog, and when a company in an industry that is dominated by only a few large names starts making major changes to stay competitive, consumers respond.

T-Mobile stock has been surging higher since its initial public offering. The stock is currently trading near all time highs and looks set to continue. Analyzing the price trend and its strength can be done using key simple moving averages. What are the key moving averages? The 50-day (pink), 100-day (blue), and 200-day (yellow) simple moving averages. As seen in the daily price chart below, T-Mobile is trading above its rising key averages which signal neutral to bullish price action in the near-term. 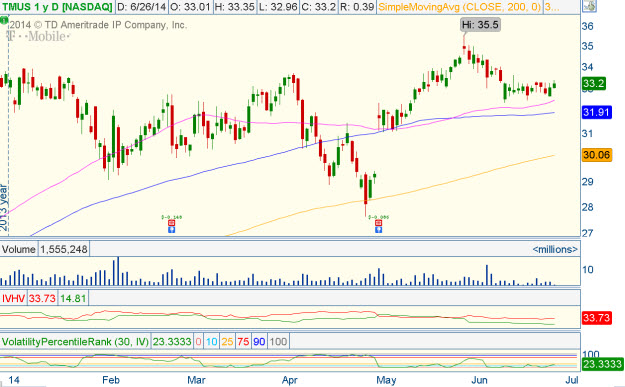 T-Mobile has seen decreasing earnings and increasing revenue figures over the last four quarters. From these numbers, the markets have been pleased with T-Mobile’s recent earnings announcements.

T-Mobile has been an average performer, year-to-date.

T-Mobile is attempting to revolutionize the communications industry by providing less restricted products and services to consumers and companies. The stock has been surging higher since its initial public offering and is currently trading near all-time highs. Over the last four quarters, earnings have been decreasing while revenues have been increasing, which has left investors pleased. Relative to its peers and sector, T-Mobile has been an average year-to-date performer. WAIT AND SEE what T-Mobile does this quarter.