Does Wal-Mart Have a Bright Future?

With shares of Wal-Mart (NYSE:WMT) trading around $76, is WMT an OUTPERFORM, WAIT AND SEE, or STAY AWAY? Let’s analyze the stock with the relevant sections of our CHEAT SHEET investing framework:

Wal-Mart is replacing the chief of its U.S. discount stores in what could be an indication that it’s losing confidence that its largest business unit will rebound after more than a year of disappointing results. Greg Foran, 53, who was promoted to president and CEO of Wal-Mart Asia earlier this year, will succeed Bill Simon, who had been CEO of Wal-Mart’s U.S. stores for four years, effective Aug. 9. The move, which was announced Thursday, marks the company’s biggest management shake-up since Doug McMillon took over as CEO of Wal-Mart Stores in February. Foran will report directly to McMillon. Simon’s departure isn’t surprising. He has been considered a top candidate for the critical job at the Bentonville, Arkansas-based retailer. But some analysts think the timing of Simon’s resignation was odd. Wal-Mart, which reports second-quarter earnings results next month, is heading into the two biggest shopping periods of the year: the back-to-school and winter holiday seasons.

“A decision to replace a high-ranking leader of a major retailer before back-to-school and before holidays speaks volumes,” said Brian Sozzi, CEO of Belus Capital Advisors. “McMillon is starting to clean house and pick executives who will move quicker.” Wal-Mart declined to make either Simon or Foran available for interviews on Thursday after the announcement. But Wal-Mart spokesman Dave Tovar told The Associated Press that Simon’s resignation was mutual. He said that Simon and McMillon have been having ongoing discussions about Simon’s departure. On July 18, Simon officially agreed to retire. In response to the timing of the resignation, Tovar said merchandise for the back-to-school and the holiday seasons have already been ordered. “This will give an opportunity for Greg to look at the plan and see if there are any other suggestions for making it better,” said Tovar, who added that Foran will be taking over the U.S. discount business at a time when the company evaluates its future budget and strategy planning, a three-month period that ends in September.

Wal-Mart stock has seen its fair share of volatility over the last couple of years. The stock is currently pulling back and may need time to consolidate. Analyzing the price trend and its strength can be done using key simple moving averages. What are the key moving averages? The 50-day (pink), 100-day (blue), and 200-day (yellow) simple moving averages. As seen in the daily price chart below, Wal-Mart is trading between its rising key averages which signal neutral price action in the near-term. 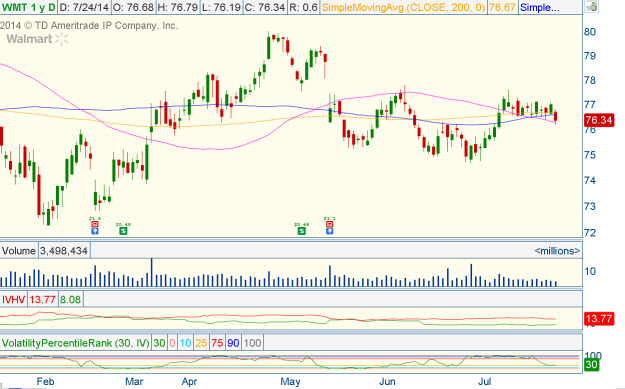 Wal-Mart has seen mixed earnings and increasing revenue figures over the last four quarters. From these numbers, the markets have had conflicting feelings about Wal-Mart’s recent earnings announcements.

Wal-Mart is a retail company that provides a variety of products and services to consumers and companies worldwide. Greg Foran, 53 will succeed Bill Simon, who had been CEO of Wal-Mart’s U.S. stores for four years, effective Aug. 9. The stock has seen its fair share of volatility and is currently pulling back. Over the last four quarters, earnings have been mixed while revenues have been increasing, which has produced conflicting feelings among investors. Relative to its peers and sector, Wal-Mart has been a relative year-to-date performance leader. WAIT AND SEE what Wal-Mart does this quarter.