Why Craft Beers Are Actually Good For the Economy

For beer lovers, the recent uptick in craft beer popularity is a godsend. At grocery stores, mini marts, and beer distributors across the country, supplies have swollen with non-traditional and abstract brews from all across the country. Small, hobby breweries are popping up all over, and consumers are reaping the benefits in the form of wider selection, and sometimes, lower prices.

While it may be a challenge to make a decision at the bar or in your store’s beer aisle, take comfort in knowing that no matter what you choose, your dollars are fueling a rather explosive — yet still fairly small — segment of the economy.

Taking a look at the numbers from the Brewers Association, craft brewing grew into a $33.9 billion industry in 2012, and also provided jobs for 360,000 Americans. These may be small brewers and businesses that we’re talking about, but that’s still a big impact.

“The figure is derived from the total impact of beer brewed by craft brewers as it moves through the three-tier system (breweries, wholesalers and retailers), as well as all non-beer products like food and merchandise that brewpub restaurants and brewery taprooms sell,” a Brewers Association release says. “The industry also provided more than 360,000 jobs, with 108,440 jobs directly at breweries and brewpubs, including serving staff at brewpubs.” 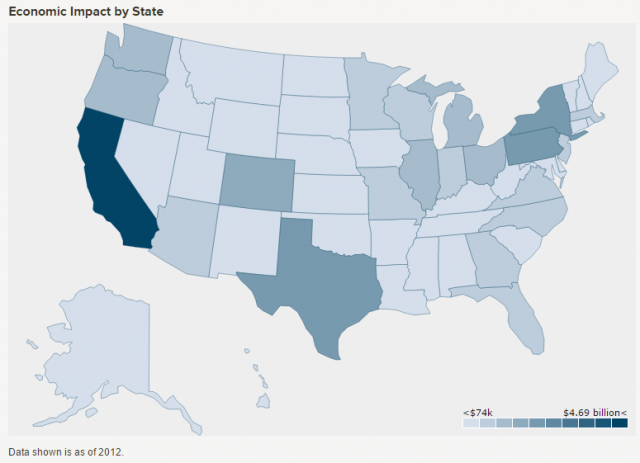 A quick glance at the map above shows that California is clearly killing it in terms of craft beer sales. In fact, California leads the country with an economic impact of $4.7 billion, doubling up Texas’ $2.6 billion and ahead of New York, Pennsylvania, and Colorado with $2.2 billion, $2 billion, and $1.6 billion, respectively.

As craft brewers have gained a significant foothold in the U.S. market, the bigger beer companies have started to take notice. Craft beer production jumped a whopping 18% to 22.2 million barrels in 2014, and in 2015, craft brews account for roughly 10% of all beer sales in the U.S. Even more impressive is the fact that beer production overall only increased 0.5% in 2014, and craft brewers were able to capture nearly one-fifth of that growth.

Again, that’s a worrisome trend if you’re the Budweisers or Millers of the world.

“With the total beer market up only 0.5% in 2014, craft brewers are key in keeping the overall industry innovative and growing. This steady growth shows that craft brewing is part of a profound shift in American beer culture — a shift that will help craft brewers achieve their ambitious goal of 20% market share by 2020,” said Bart Watson, chief economist at Brewers Association. “Small and independent brewers are deepening their connection to local beer lovers while continuing to create excitement and attract even more appreciators.”

What are the bigger companies doing to fight back? The strategies range from buying up small brewers to pushing out ‘craft beers’ of their own. Budweiser even went out on a limb with a Super Bowl commercial poking fun at craft beer drinkers, proclaiming their own product as “proudly macro brew.”

“Why does Budweiser care enough to run a hollow, multi-million dollar spot just to insult the craft beer community?” asks writer Jeff Baker for the Burlington Free Press, who also doubles as a bar manager. “The company is worried and it doesn’t know what to do,” he says.

And he’s probably right. For most big beer companies, a threat like this hasn’t come along in a long while. With craft beers making a serious run for some considerable market share, and legal marijuana hitting the scene in certain states, drinkers may be taking their interests, and dollars, elsewhere.

So, while big brewers sit perplexed as to how to handle craft breweries, those same small competitors are starting to make an incredible economic impact. By supplying the economy with 360,000 jobs, and satisfying a demand for more choice among drinkers, these brewers are finding themselves in a special place in the small business echelon — and attracting more customers by the day.

It’s also a good sign for the economy as a whole, as people that are clearly willing to spend a little bit more on a more specialized product is an indication that there is a sense of confidence — and disposable income — among the population.

So drink up, and do your part. You know, for the economy.