Dunkin’ Donuts (NASDAQ:DNKN) has been busy. The donut and beverage chain is gearing up for a hopefully fruitful spring, and it has a number of new plans on its hands. Not only is it rolling out a seasonally inspired donut, it also is launching a free iced coffee campaign to take on the likes of McDonald’s (NYSE:MCD) and Taco Bell’s (NYSE:YUM) breakfast menus. The question is: Will Dunkin’ be successful, and if so, will it get closer to nabbing some of the market space currently monopolized by rivals like Starbucks (NASDAQ:SBUX)?

It’s true that Dunkin’ Donuts has a host of competitors, but the company has recently been working to carve out its niche in the saturated fast food and coffee space, and its latest efforts demonstrate how the company’s executives plan on setting Dunkin’ Donuts apart from the crowd. One thing the chain has been vocal about is its philanthropy efforts — it pledged in March that it would donate to food banks across the country as part of the promotion of its new breakfast sandwich.

The company promised to donate one egg to Feeding America for every Eggs Benedict Breakfast Sandwich sold from March 3 through March 9, and now Dunkin’ is delivering on that promise. WPRI reported Thursday that on Wednesday, the Rhode Island Community Food Bank received a delivery of 81,900 eggs from America’s Egg Farm on behalf of Dunkin’ Donuts. The Rhode Island Community Food Bank is just one of eight food banks across the country that is due to receive a donation of eggs as part of the program, and WPRI said that Dunkin’ Donuts has now donated more than $1 million over the past five years to support Feeding America.

On top of its philanthropic efforts, Dunkin’ Donuts is also in the midst of a spring cleaning of its menu, and from that comes some free iced coffee and a new Peeps donut. According to a press release, the company unveiled its Peeps donuts on Tuesday, launching the “first-ever donuts topped with a real PEEPS Marshmallow Chick.” The donuts are shaped like flowers and are decorated with pastel pink or green icing, topped with a pink or yellow Peeps marshmallow chick. They will be available for a limited time at participating Dunkin’ Donuts restaurants, but customers at least have until Easter to pick up their Peeps. 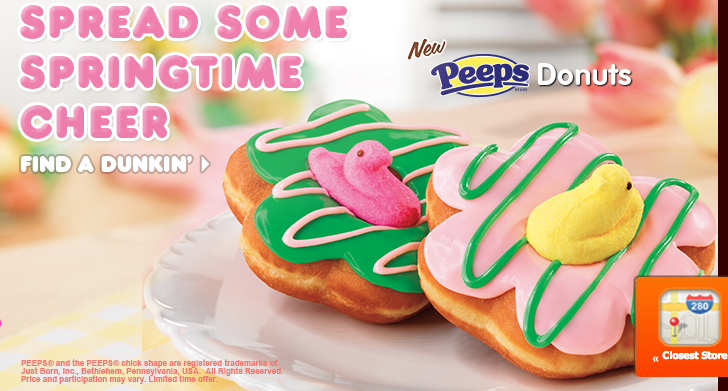 While they’re at Dunkin’ Donuts, customers may be tempted to pick up the chain’s latest iced coffee offerings. The press release highlighted by WJBF.com also noted that Dunkin’ Donuts has teamed up with its sister brand, Baskin-Robbins, for the second year in a row to serve iced coffee featuring Baskin Robbins ice cream. The new iced coffee flavors include Cookie Dough Iced Coffee and Jamoca Almond Fudge Iced Coffee, as well as returning favorite Butter Pecan Iced Coffee.

Get ‘em while they’re cold, right? And try to get them on Mondays, too, because that’s the day the chain will be offering free iced coffee weekly through May 26. According to the Detroit Free Press, Dunkin’ Donuts has started thanking loyal customers with a free small iced coffee every Monday through May. The freebie purposefully lasts for eight Mondays because it is the eighth year the chain was recognized as No. 1 by the Brand Keys Customer Loyalty Engagement Index, a national researcher of customer interaction.

Now consumers really have no excuse not to be caffeinated this spring, especially because McDonald’s recently rolled out a similar promotion…