Overall industrial production declined 0.5 percent on the month in April, more than the 0.2 percent decline expected by economists. This is the largest sequential decline in eight months, and mainly reflects cutbacks in domestic manufacturing — the index declined 0.4 percent on the month, which is particularly disappointing, given expectations for an increase of 0.1 percent.

Overall industrial production has been much stronger in 2013 than in the year-ago period, but April’s data show a concerning negative growth rate. The manufacturing index has declined for two months now, and output of all major categories within the durable goods components, except computers and electronic products, is down. Year-over-year growth in overall output has slowed from 2.4 percent in December to 1.3 percent in April.

Capacity utilization fell from 78.3 percent to 77.8 percent, 2.4 percentage points below its long-run average. The utilization rate is not where it was at the end of 2012, erasing gains made during the first quarter. 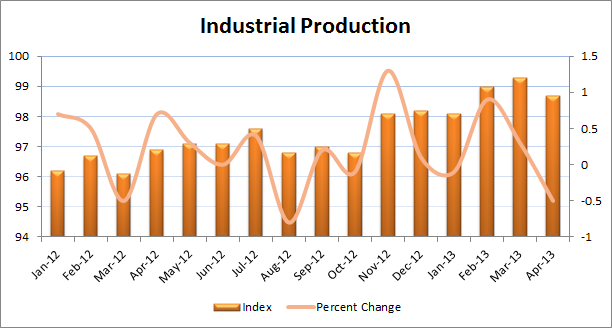 Separately, the Empire State Manufacturing Survey for May 2013 indicated that overall conditions for New York manufacturers declined marginally in the month. The general business conditions index fell four points to -1.4, its first negative reading since January. The new orders index also fell into negative territory, and the shipments index fell to zero. 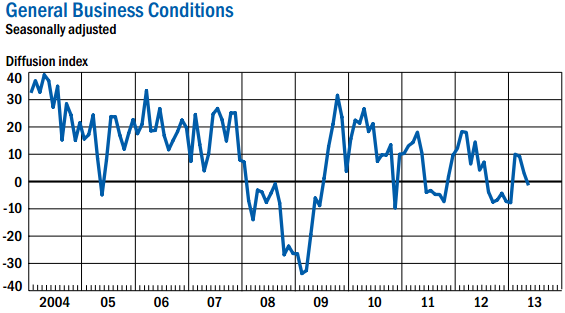