Obama, The Economy, And 3 Big Problems That Have Slowed Growth 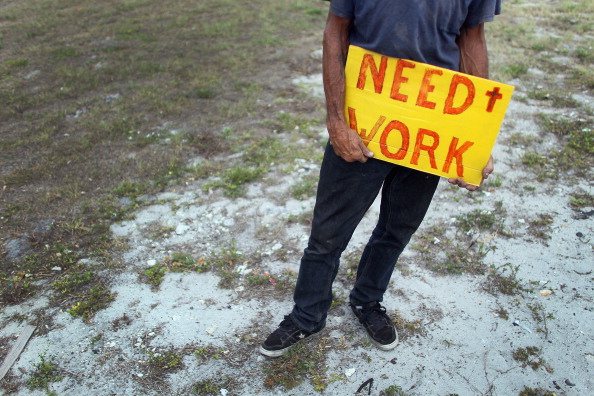 Economically speaking, President Obama started deep in a hole, but has managed to climb his way out. It took roughly six years for the economy to finally pick up steam, a good deal longer than many previous recoveries. For an awful lot of people, the past several years have been tough, and even more so for the millions of Americans who were already struggling to make ends meet before the crisis. Millions of jobs disappeared, and although the numbers show they have returned, many are part-time, or low-paying, rather than positions that can sustain a family, or lead to financial prosperity and personal growth.

Particularly for our struggling neighbors, the recovery over the past half-decade has seemingly taken an eternity. The thing is, those people wondering what the hold up has been are right in one aspect: this recovery has taken substantially longer than in previous recessions. There are several factors at play, and it seems true to many that while things look good on paper, the sentiment in much of the country is that it doesn’t feel like things are any better.

The Organisation for Economic Co-operation and Development detailed some of the factors behind the slow ascent back to economic normalcy in a report, profiling some of the macroeconomic and financial challenges still facing many Americans. They do lay out some facts — like job numbers going up and consumer confidence rising — but there are other aspects at play that are clearly holding things back. “This is not a ‘business-as usual’ recovery. The economic rebound has been weaker than after past recessions, not only because of the lingering effects of the financial turmoil but also due to unusually large cut-backs in public spending, including government employment, and the long-expected retirement of baby boomers,” the report says.

A combination of low wages, regressive tax structures, and failing social safety nets haven’t given people the traction to climb the economic ladder. Cost increases in education and cost of living have also played a role. Loss of jobs to overseas markets, and jobs that were cut and haven’t returned, or came back at much lower pay and hours. These are just a few of the issues that have slowed us down significantly. 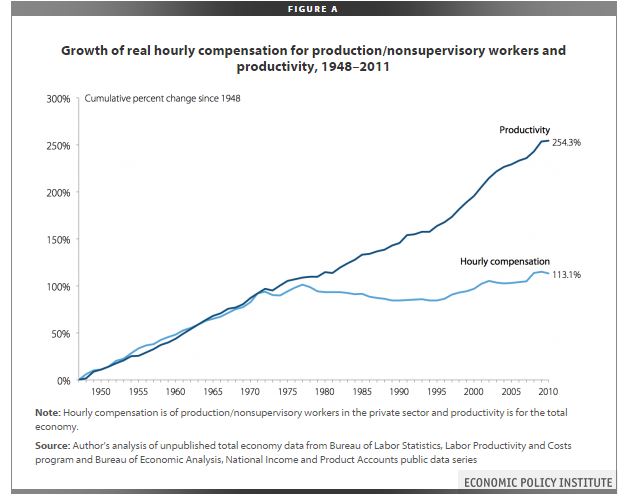 The wage issue has its genesis in several key areas. For starters, you can look back several decades — to the 1970s, in fact — to see where productivity and employee compensation, two things that historically had been intimately linked, disconnect from each other. This has only gone on to hold true over time, as productivity for businesses has shot through the roof, but wages have stagnated. Other safety net measures for low income workers, like the minimum wage, have also flat-lined or weakened with time.

By having businesses perform better, taking in more and more in profit and revenue, wealth has increased dramatically. The problem is, almost none of that wealth is being shared with the majority of the workforce; it has instead been held by top executives, shareholders and members of the upper classes. Traditionally, reinvestment of that wealth into the community through the stock market, taxation, or charitable giving have helped even the playing field economically, but that is less and less the case.

The recession only helped magnify problems with wage disparity. The cutting of social safety nets during the most trying times for many low-wage Americans has amplified the problem as well, and poverty rates have shot up as a result of increasing inequality. The tide does look to be changing, at least a little bit. Many cities and individual states are bumping up minimum wage levels on their own, and others appear to be following suit. Solving the issue with stagnating wages, and increasing minimum wages to sustainable levels would be a significant domino to knock over in creating a cascade effect across the entire economy. 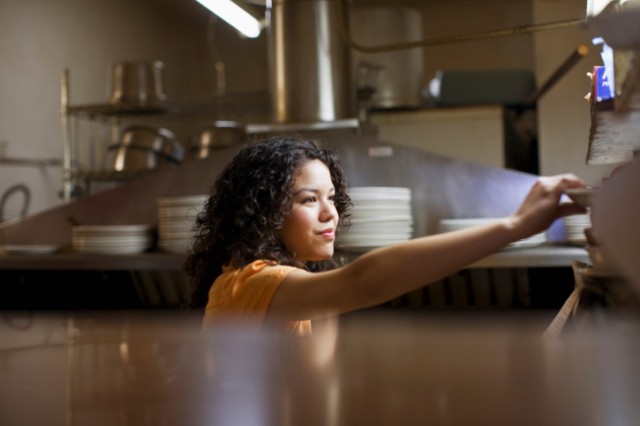 People need jobs. And there haven’t been enough of them, until recently.

Over the past six years, job numbers have steadily risen, and the unemployment rate hit has hit below 6%. This indicates a return to levels last seen before the recession hit, and the effects can be found in increased travel and spending, as well as jumping real estate values and consumer confidence. People are more willing to spend money, take on credit card debt and go on vacations when they are confident in their ability to pay for it.

Boosts in domestic energy production, fueled by the natural gas and oil industries in states like North Dakota and Ohio have helped create a good number of jobs, and return many people to work. The biggest issue on the employment front is that while many jobs have been recovered since the recession, they are low-wage positions that are a considerable downgrade from their previous forms. What were once middle-class jobs have been reincarnated as low-wage positions, putting extra strain on those who have been able to find a job, even after looking for months, or even years.

The Washington Post says mid-wage occupations that pay between $13.83 and $21.13 per hour constituted 60 percent of the positions lost during the recession. However, those positions make up only 27% of the new jobs being created. Jobs paying below that mark of $13.83 have been dominate, making up 58% of the new positions created. In order to get back in proper economic order, America needs to find ways to build up its middle class, and creating good, well-paying jobs is a start. 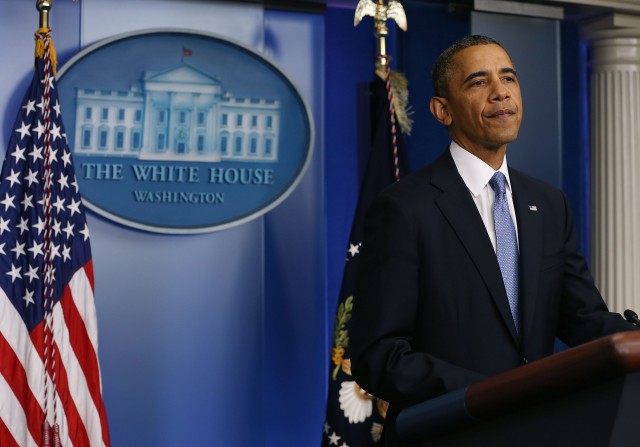 The government has provided a helping hand to many, but their inaction or ineffectiveness on things like job creation, wages, and securing unemployment benefits for a good part of the downturn has also been a factor in elongating the recovery. Congress has been gridlocked by competing ideologies (though that could change with the now Republican-dominated House and Senate), which has led to hardly any legislation getting passed. As a result, the country has become a political mess with ordinary citizens turning against each other, pointing fingers and assigning blame.

One way the government can help is by rebuilding social safety nets. Many safety nets that low-wage individuals have come to rely on — like food stamps and housing assistance — have come under threat and even been cut as cost-saving measures. By taking these critical crutches away, many people are falling even farther behind economically. Even those who constantly rally against spending on social welfare of any kind usually benefit in some shape or form.

Comprehensive tax reform is the final piece to the puzzle. While the rich and large businesses are constantly able to get away with fancy financial footwork in an effort to avoid paying taxes, almost everybody else picks up the slack. Simplifying the tax code to make it easier to understand can pay dividends as well, on all fronts. There are several strategies to consider reshaping taxes, and if some ideas from economists were actually put into practice, prosperity could return even faster.