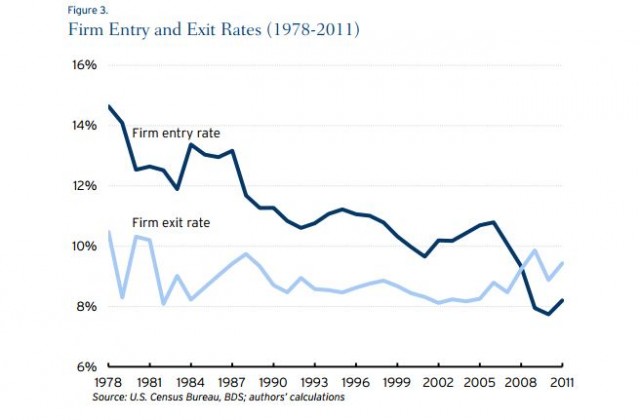 Given the sluggish economy, dwindling levels of entrepreneurship, and the fact that business dynamism has been nosediving in recent years, it’s not too much of a stretch to say that American business as we know it is in peril. Well, for the small guys, anyway.

The economy is in a very sluggish state. Entrepreneurs are having a hard time gaining traction, businesses are leaving the market at a much faster rate than they are entering, and stable, well-paying jobs are still too few and far between. In all, it’s a rough situation for American businesses, and it’s especially rough for small businesses in particular.

Business dynamism, which measures the rate at which new businesses are born and the point at which they subsequently leave the economy, is currently telling economists that the number of entrepreneurs is dropping, and fast. Through the act of creative destruction, many small businesses are hardly able to gain their footing out of the gate, let alone persevere in an incredibly competitive and tough economic landscape.

That’s one of the reasons most of the big, well-established incumbents are able to ride things out, while small businesses — which many believe the United States has built its economic backbone upon — get trampled underfoot. Entrepreneurship, and business dynamism as well, are both incredibly vital to the health of the economy at large. Small businesses supply jobs in great numbers, spur advancement and innovation, and help grow income levels. As small businesses and entrepreneurs have found it harder and harder to gain a solid footing in the market, it has a direct connection to the sluggishness of the economy overall.

So what exactly is going on? Is entrepreneurship, in fact, dead?

In this case, given the current circumstances, taking the view of the pessimist isn’t completely unsound. Many Americans were torn asunder by the financial crisis and the corresponding recession, which claimed thousands of small and even big businesses in its wake. For many, even the thought of venturing into business on their own given the current state of the economy required some serious courage.

It’s difficult to get an accurate read on exactly how widespread the recession’s effects were felt, although we know that it was incredibly damaging. On an individual level, a Dallas Fed study says that household wealth tumbled by $16 trillion, or 24 percent, from late 2007 until early 2009. Not only that, but an enormous amount of productivity was lost as well. “We conservatively estimate that 40 to 90 percent of one year’s output ($6 trillion to $14 trillion, the equivalent of $50,000 to $120,000 for every U.S. household) was foregone due to the 2007-09 recession,” the report says.

But even through all of that, entrepreneurs are still persevering. No, entrepreneurship is not dead. In fact, the U.S. economy is still dense with small firms. It’s just entering a new step in business evolution. The game is changing, and it’s simply taking the players a little bit of time to catch up. 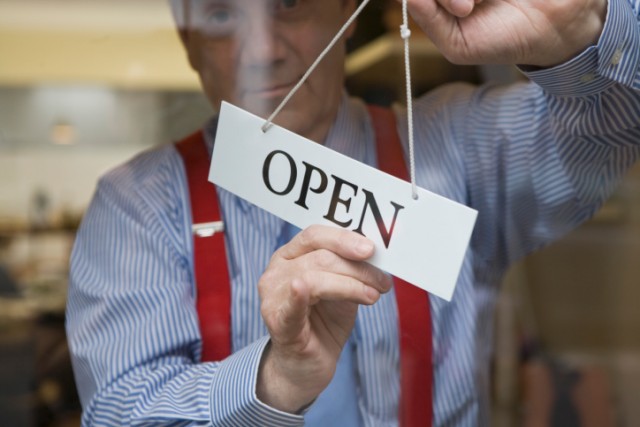 The idea of whether or not the spirit of entrepreneurship is dying was recently taken on by writers at Reason.com, and they noted that as the state of the markets and businesses evolve, so do the types of enterprises entrepreneurs are raising up. Since many of those willing to jump into business for themselves don’t have the resources — or possibly the connections and pedigree — to compete with larger, more-established companies, the rise of the ‘microeconomy’ has led to different paths into the fray.

Reason mentions that there are were 42.6 million ‘contingent workers’ in the economy back in 2005, which includes people working as day laborers, independent contractors, and temp workers. While there isn’t any data to signify where that number may be today, it’s safe to assume that it has likely grown, given nearly a decade of population growth and many companies taking cost-cutting measures by hiring freelancers or temporary workers in lieu of full-time staff.

Many freelancers and independent contractors, who may be affiliated with a number of different sites to find work, are creating their own ‘brands,’ if you will. While not traditional businesses in any sense, people are finding ways to turn what they do into an entrepreneurial effort, just on a very small scale. For example, in the world of graphic design and even freelance writing, many creatives are crafting names for themselves through what they produce — and attracting more clientele, in the form of businesses wanting to contract them for work.

This is a form of unconventional entrepreneurship, and may not be considered a classic ‘business’ by most. Yet it still fully encapsulates the entrepreneurial spirit.

Other businesses, like Airbnb, Lyft, Uber, and others, are all finding ways to build companies worth billions by using resources that are actually owned by other people. This is another way in which entrepreneurship is evolving, and may actually have its roots in the increased levels of inequality the country is experiencing.

Since many entrepreneurs are lacking capital to get their ideas off the ground, they’re finding ways to utilize the capital and assets of others, all while splitting the profits with them. This is largely a generational shift, as many people from older generations would not be comfortable sharing a ride in their personal vehicle with a stranger, let alone letting one sleep on their couch. Younger generations, in stark contrast, seem to be embracing the concept. 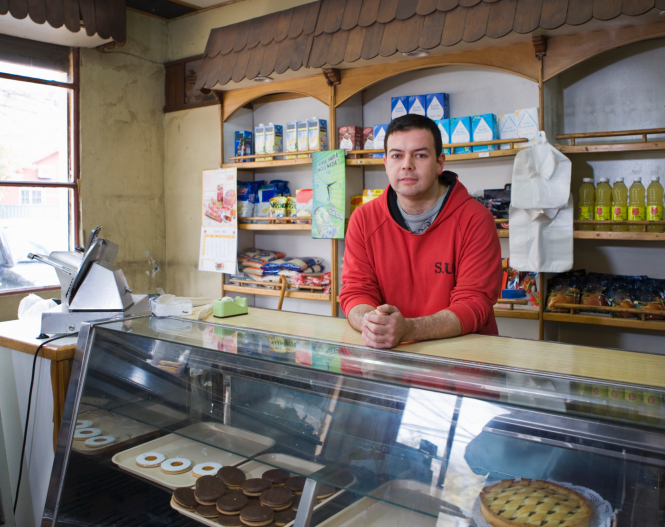 While the need to improvise due to lack of capital or resources certainly can be a handicap of sorts, it really is forcing entrepreneurs who really want to find success to innovate at a high level — and in large numbers.

All of that is good and well, but even these new companies, many tech-based, can’t provide the jobs and opportunities that Americans so desperately need. Many of these new businesses only employ a handful of people, but what they do is offer platforms for others to start their own small business of sorts. Uber or Lyft drivers are able to form their own client base, artists populating websites like Etsy can create their own personal stores for their products, and even Airbnb can allow anyone with an apartment to basically run their own bed and breakfast.

These things are creating opportunity for people to make money, yet it’s all under the radar. These numbers aren’t really taken into account in business dynamism charts, or even in tallies from commerce departments. And that’s because the game is changing, and the entrepreneurs have changed.

Now the way to measure it has to change as well.

Since so many companies have taken to jettisoning jobs in the wake of the recession, many people have taken to creating their own jobs in addition to finding a niche on some bigger company’s platforms. While the traditional idea of a brick-and-mortar shop, or even the lemonade stand model are fading, people are figuring out ways to get businesses going with the resources they have available to them.

According to an article from the Huffington Post, microbusiness makes up 88 percent of the overall business in America and accounts for more than 25 million individual entities. All with very little, if any, institutional support. The entrepreneurs are out there, giving it everything they’ve got. We just need to recognize that entrepreneurship simply may not mean the same thing it did even as little as ten years ago, and adjust our models to be able to accurately gauge it. Small business and entrepreneurship are still very much the heartbeat of America; it’s all a matter of finding the correct way to check its pulse.