EPA Regulations Once Again Head to the Supreme Court 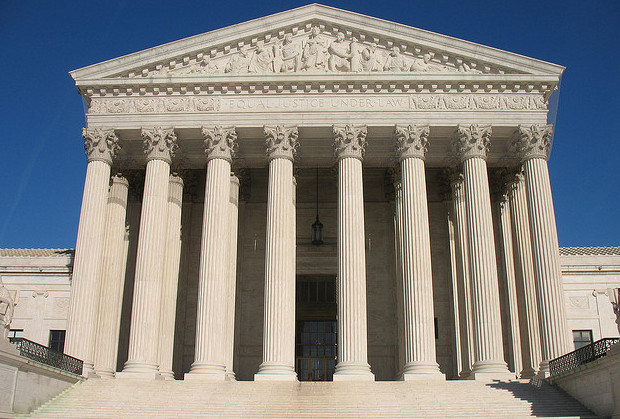 In Utility Air Regulatory Group v. U.S. Environmental Protection Agency, the Supreme Court will be considering whether the EPA can regulate “stationary sources” of greenhouse gas emissions — power plants, for instance — under the same powers it uses to regulate “mobile sources” like cars, which the agency does under the authority of the Clean Air Act and 2007′s Supreme Court ruling in Massachusetts v. EPA.

The Wall Street Journal reports that in 2009, the Obama administration decided to take the Massachusetts ruling, which said carbon dioxide emissions constituted a pollutant, and apply a series of complex legal definitions to make rules to govern stationary sources of pollution. Originally, a plant would come under federal regulation once it produced more than 100 tons of pollutants annually.

The EPA realized the sweeping nature of such a ruling on, by its own estimates, more than 6 million buildings, including churches. The Wall Street Journal also notes the EPA perceived that so many buildings needing to meet regulations would create an unsustainable economic burden, costing the economy $30 billion to $40 billion per year. Therefore, the agency rewrote the rule to change the number from 100 tons to 75,000 tons per year.

This is where the agency ran afoul. To rewrite rules, a U.S. regulatory organization needs the approval of Congress. Seeing the chance to revisit the Massachusetts case, lawsuits followed, which have now been compiled into Utility Air Regulatory Group v. EPA. Petitioners will not see all aspects taken up again, with the court only concerned with whether the stationary sources of pollutants can be regulated under the current law.

Texas is one of 12 states asking the Supreme Court to review what the petition calls a “flawed” decision by the EPA. The Journal noted a press release that quoted the Texas Attorney General, Greg Abbott, saying that the EPA’s regulation on buildings was “a massive burden on states and businesses.”

Peabody Energy Co. (NYSE: BTU) agreed with that statement. It is one company that was a party to the proceedings of American Chemistry Council v. EPA, a case now linked with the Utility Air case. The petitioners wrote that applying the standards as they were would produce “‘absurd results’” contrary to the intent of Congress when passing the bill.

The New York Times reported that petitions were urging the court to review the rules drafted by the EPA because the rules represent the agency “extending its reach to potentially millions of industrial, commercial, and residential facilities across the country, at costs estimated to run into the tens of billions of dollars per year.” Companies and trade organizations are among those signing the petition, as the new regulations could result in steep costs as they endeavor to meet the new regulations.

On May 9, Peabody filed an amicus curiae, or “friend of the court” brief, to the Utility Air case. Peabody is the world’s largest private sector coal company, and, like other companies and organizations, will have to bring its facilities up to EPA standards if the Supreme Court allows the new rules to stand. Peabody was founded in 1883 and operates 28 mines in the U.S. Bloomberg reports that when the company released its third-quarter earnings earlier in October, shares were down 31 percent for the year.

Don’t Miss: Can the New York Giants Dodge Another Disaster?