Is Etsy Turning into Ebay?

Etsy, the online arts and crafts retailer, is set for big times.

The Brooklyn-based site intends to raise approximately $100 million from the public markets in an impending Initial Public Offering, or IPO. At the end of 2014, the site reported $195.6 million in revenue figures, a figure that is not exactly chump change. It also had 54 million members with 1.4 million “active sellers” and 19.8 “active buyers,” a 56% increase from the previous year’s figures.

Despite that, hard business realities have brought their own set of problems for a seemingly fairytale success.

For starters, the site’s revenue figures have not yet outpaced its operational costs. In its SEC filing, the company cautioned that it may never turn a profit or that it will not give quarterly or annual revenue guidance and will, instead, “talk to investors.”

The company’s problems are further compounded by the fact that it does not use traditional accounting practices. For example, according to this New York Times story, the company says it earned $2.3 million in adjusted EBITDA (a new metric invented by the company) but, based on GAAP accounting methods, the company lost $15 million during the same period.

But the biggest problem facing the company is a change in its brand identity and business model.

Etsy’s beginnings were quirky, and its growth has been scorching as users have flocked to the site drawn by its unique value proposition of catering exclusively to artists and artisans. As the company prepares for its IPO, however, that value proposition might change.

The company’s 2013 policy change that allowed successful retailers on the site to outsource goods manufacturing has come in for criticism from users. The policy also provided the necessary leeway for small businesses and Chinese manufacturers to sell their products on the site. A recent Times story about this topic includes the following quote from an Etsy user:

“It’s like having a gourmet restaurant on a street with upscale galleries, bookshops and coffee shops, and a McDonald’s or a Walmart gets built in a vacant lot on the street.”

But the Walmart next to a gourmet restaurant (perhaps it should be an organic or gourmet grocery store for the correct parallel?) comparisons will also become inevitable, once the site lists on the stock market.

Public markets are concerned with growth and revenues. Etsy has both but it operates in a completely new (and unquantified) market. Within the context of the technology industry, this is not a new thing. 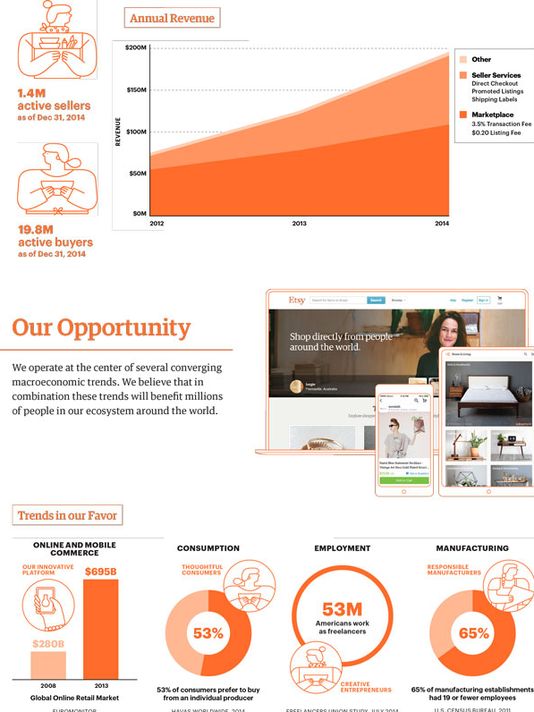 Google was the first such company to derive revenues purely from its search business, when it was listed on the stock market. Likewise, in spite of its astounding secondary market valuations, Facebook’s stock tanked after debut because public markets did not fully understand its revenue streams. More recently, HortonWorks, a company that provides big data services, raised $100 million from the public markets last December on the back of a net loss of $36 million.

To issues future guidance (and put its growth in perspective), Hortonworks used figures from and about the Big Data market. The market, which is relatively well-defined, helped quantify its growth prospects and competition to enable a public market valuation.

Etsy claims to work in a “new economy.” That claim may resonate with artists and its users, but it may not be enough to convince investors about its revenue prospects. This is because it does not reveal much about the state of affairs at the company.

The site’s business model closely resembles that of an online retailer, but its policies and guidelines differ from those of standard online retail outfits. To ramp up its growth prospects, the company needs to make money, which is possible only if successful retailers in its ecosystem become even more successful and generate additional income.

Back in 2013, when it generated $895 million in sales, the company released a report detailing the economic impact of its business to argue for an expansion of federally-funded workforce development training programs for the “more informal, Internet-powered sector.” According to the report, a majority of Etsy’s members were women and had lower levels of income but higher levels of education. About 83% of Etsy sellers ran their business alone. Training programs would have enabled them to grow their business.

More recently, the company launched the beta version of a new service called “Etsy Wholesale.” The service takes 3.5% commission on each wholesale transaction. This figure is substantially lower than a standard wholesale markup. Users, whose business has grown considerably thanks to the site, welcomed the service.

Critics contend that the site is pandering to market forces (in which bigger volume yields better profits). The site, they contend, is becoming more like eBay. For Etsy, which emerged as an alternative to mass retail sites such as Amazon and eBay, this is hara-kiri because it violates the site’s founding business philosophy, which was responsible for its growth numbers.

But the change may be inevitable. Etsy, which started life as an anti-eBay, might have to become more like eBay to make investors happy.