In general, teachers aren’t well-compensated, especially considering how important their jobs are. We live in a nation where no one bats an eyelash when professional ball players sign multi-million dollar contracts yet the people in charge of molding the next generation earn modest salaries.

Sure, they have summers and snow days off. But still, the average teacher works hard for the money, often dealing with unruly students, frustrating curriculum changes, and yes, plenty of homework of their own. Teachers in some parts of the nation have it better than others. But when they decide to go on strike, it’s not all about the money.

Oklahoma teachers are some of the worst paid in the nation 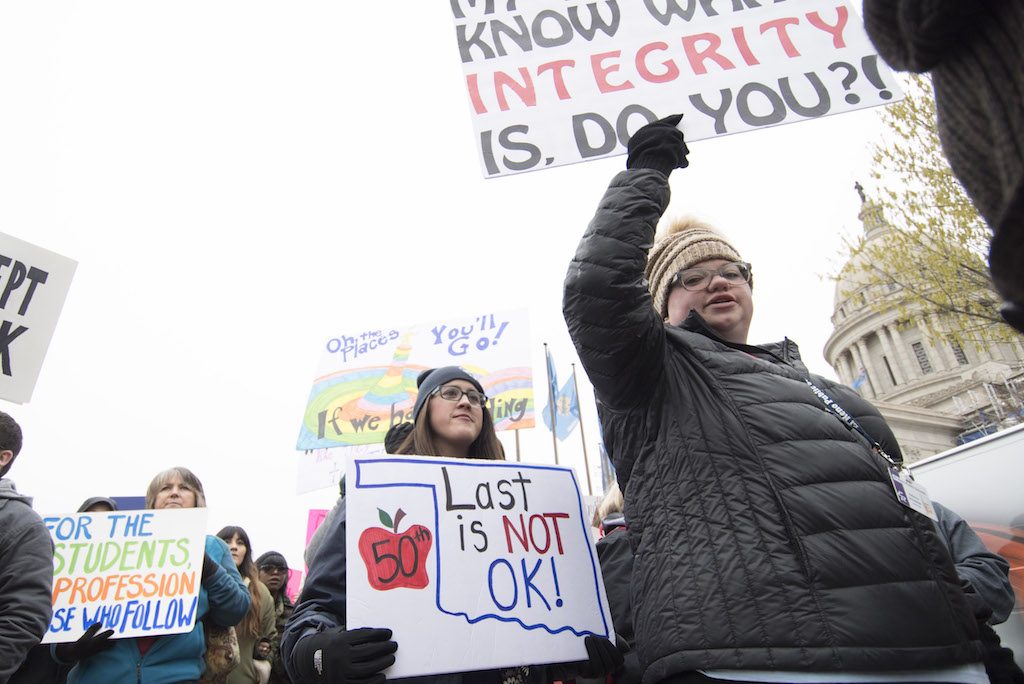 In 2016, Oklahoma had some of the lowest paid teachers in the country, ranking 49th amongst all the states and the District of Columbia.

The average teacher’s salary in Oklahoma is right around $44,000 per year, which is worlds apart from the highest paid teachers in Washington, D.C. There, they earn an average salary of almost $78,000 each year. In Oklahoma, it currently takes 20 years to reach the $40,000 pay rate.

Next: Their latest raise wasn’t enough.

The raise they got wasn’t enough 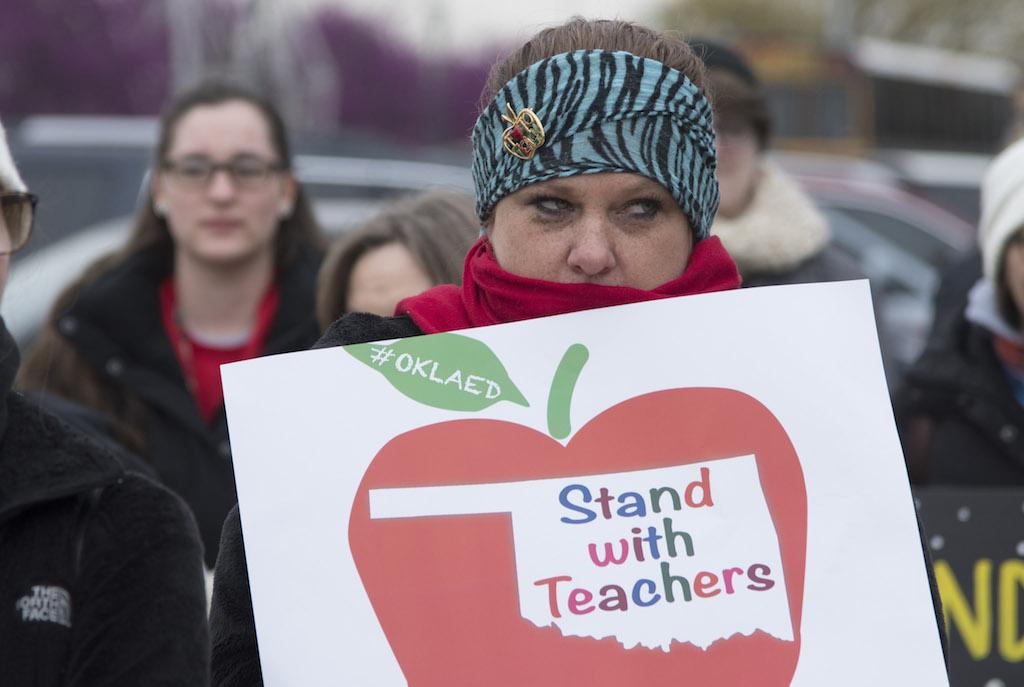 In March 2018, the Oklahoma Legislature approved a $6,100 wage increase for public school teachers. It was notably less than the $10,000 raise they had originally asked for.

In addition to salary increases, the Oklahoma Education Association, the largest teacher’s union in the state, asked for raises for support staff wages and additional funds for other school needs like textbooks.

When their demands weren’t met, they went on strike in early April 2018.

Next: It goes beyond just salary. 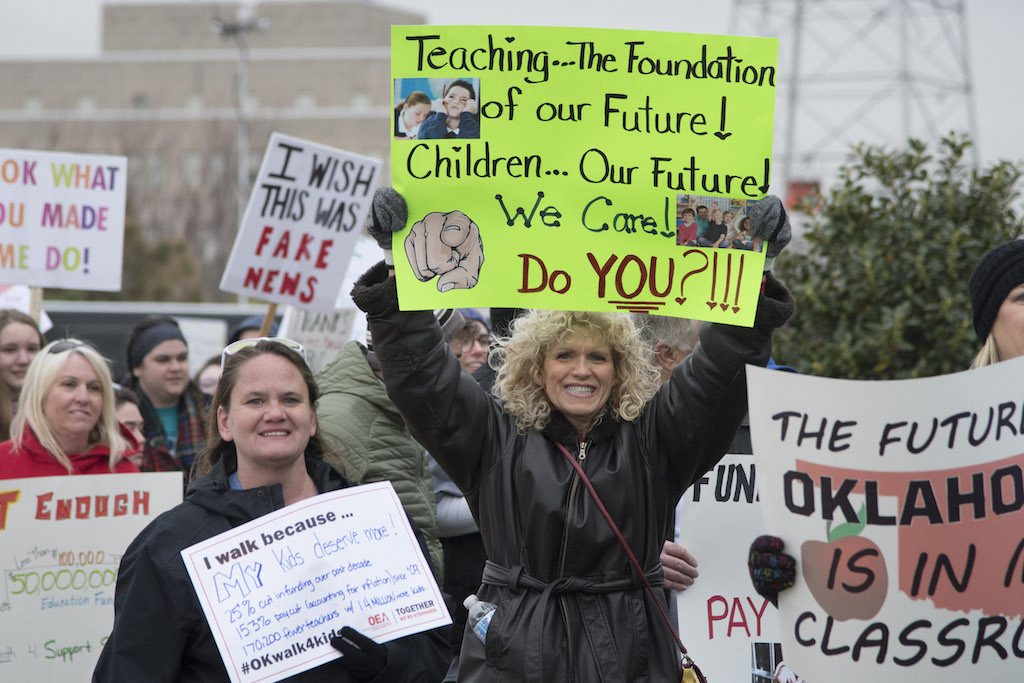 While the strike may make teachers seem greedy, many have been quick to point out that the problem extends much further than just paychecks.

Oklahoma schools are often lacking basic supplies such as textbooks, printer ink, and curriculum supplies. They’ve had to reduce classes to four days per week instead of five because they can’t afford the electricity for the extra day.

“I came to the Capitol not just for myself, not just for a raise, but for my students,” Misti Vann, a teacher at Belfonte Elementary in Oklahoma, told the Washington Post. “My classroom, my books are falling apart.”

Going on strike is sending a message that funding needs to increase in all areas of the public school system — not just teacher salaries.

Next: There are several states affected.

Teachers in West Virginia and Arizona aren’t happy either 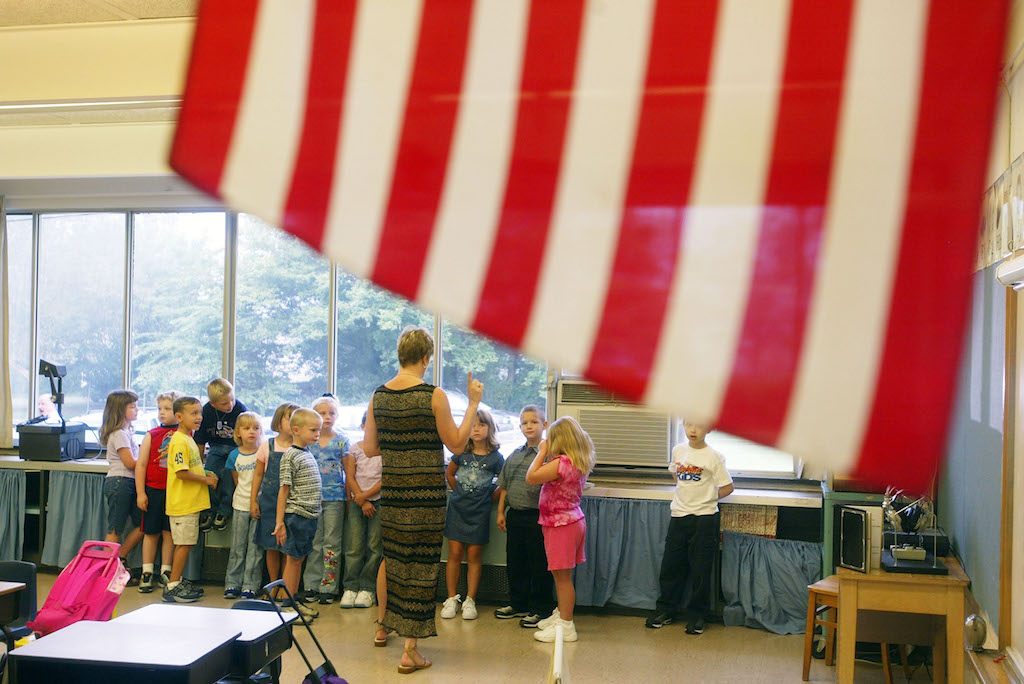 Teachers in West Virginia are sick of their conditions too. | Joe Raedle/Getty Images

The issues expressed during the strike are hardly unique to Oklahoma. While some states enjoy healthy education budgets and cushy teacher salaries, others are suffering with below-average wages and outdated technology in their classrooms.

The teacher strike in Oklahoma is part of a larger movement in the country. Educators in West Virginia went on strike for nine days in March 2018 to protest similar issues, and rumors of potential strikes in Arizona and Kentucky are circulating.

Next: The states going on strike have similarities.

The states going on strike all have something in common 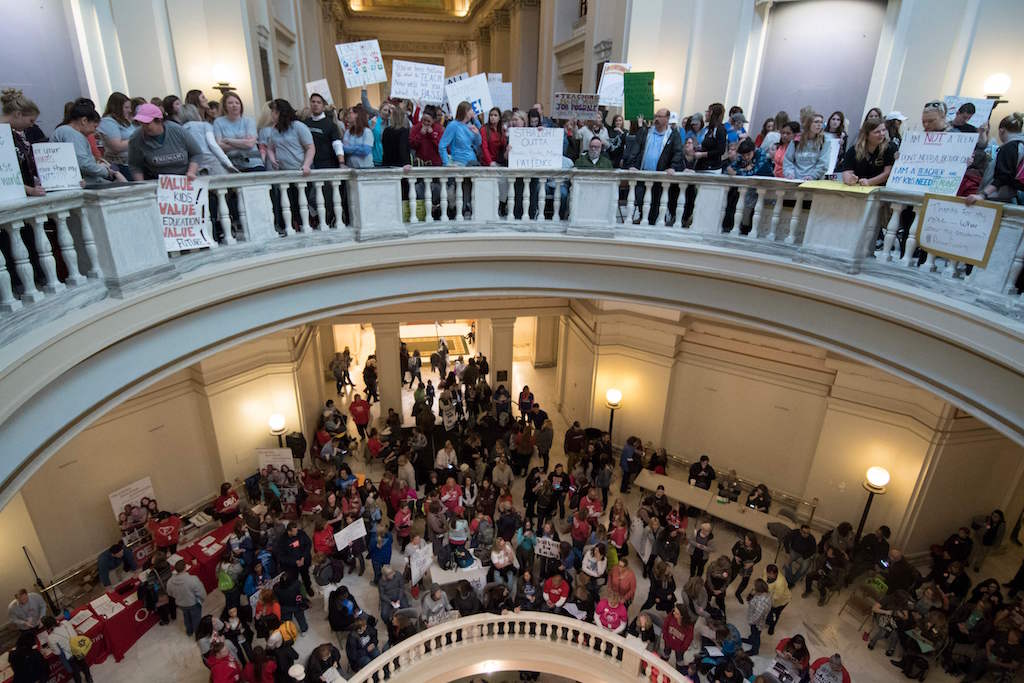 West Virginia, Oklahoma, Kentucky, and Arizona are all “right-to-work” states, meaning teachers don’t have to pay union dues but they can still enjoy any benefits that come from union-negotiated contracts. Generally, states with these types of laws have lower union memberships.

Public sector strikes are also against the law in all four states.

Next: Strikes have become more common.

Protests are a way to inspire change 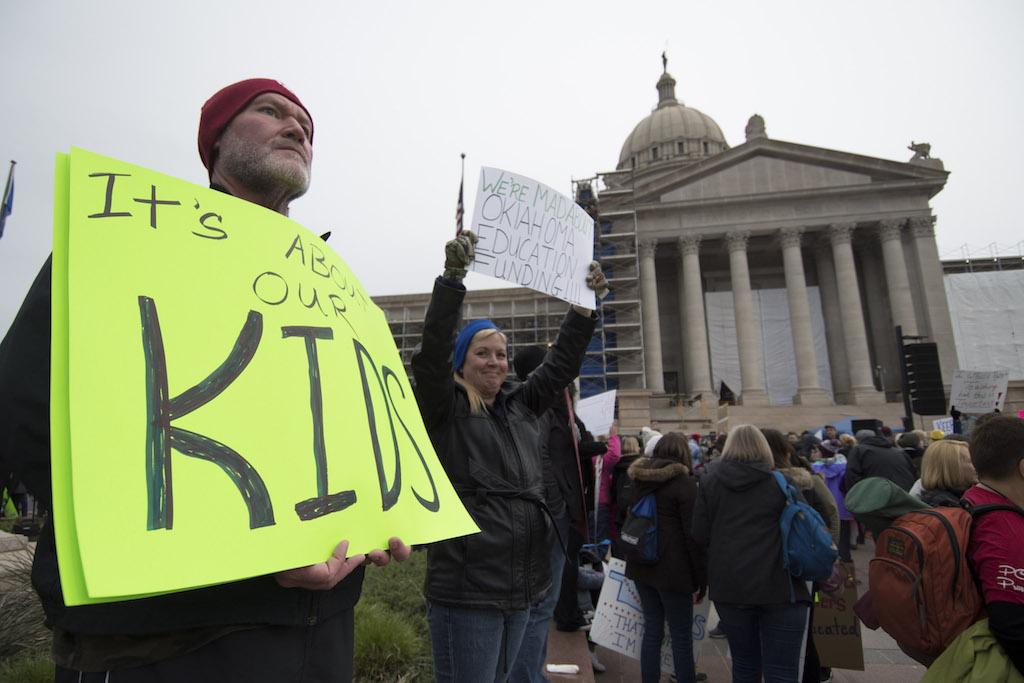 The strike is about bringing awareness to the state of the education system. | J Pat Carter/Getty Images

Marches, walkouts, sickouts, pickets, strikes — the modern way to draw attention to a cause isn’t through the court system, but is rather by taking to the streets to demand action. The teacher’s strike in Oklahoma was largely organized on Facebook.

Next: It’s the students who are suffering. 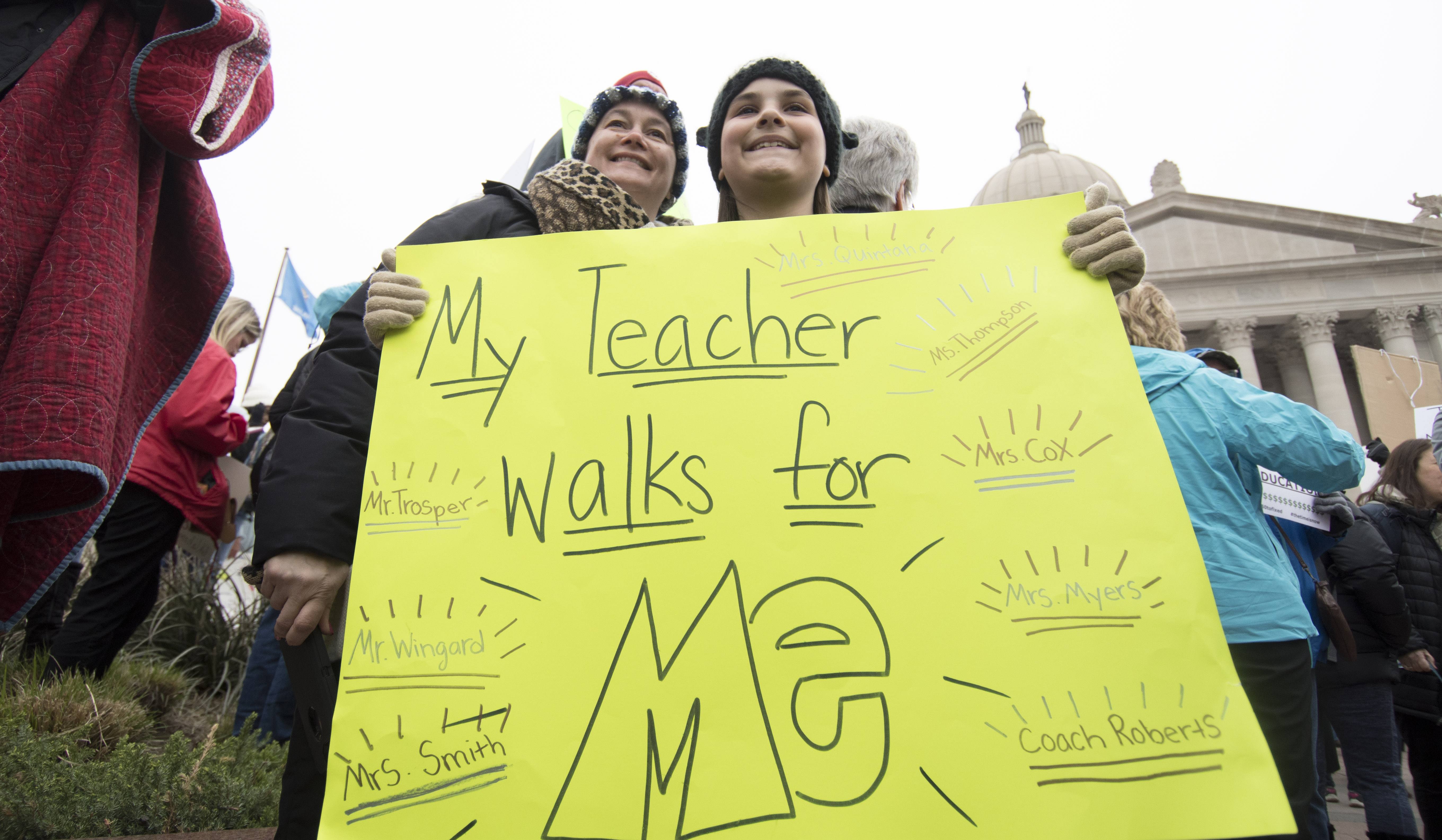 While there’s no easy solution to the problems facing teachers and schools in these states, one thing is indisputable: the kids are suffering while teachers are protesting.

“A strike is hugely disruptive to families and kids,” Dan Weisberg, CEO of TNTP, a nonprofit group promoting teacher quality told The Wall Street Journal. “This is high stakes, and it’s of particular risk in low-wage states.”

Besides just missing out on days of instruction, the parents of these kids need to arrange for childcare while their kids aren’t in school. It’s stressful and inconvenient for everyone.

It’s imperative that lawmakers take swift action to resolve these issues or students will be the ones to pay the price.

Read more: Teacher Shortages Are the Most Severe in These States