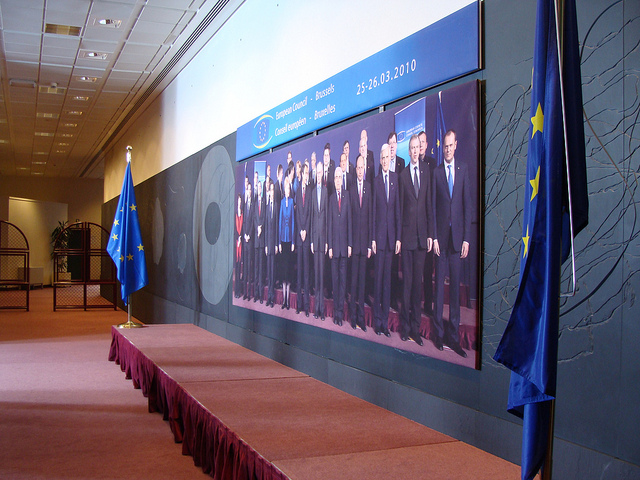 The European Union is trying to look strong as some signs of manufacturing life as exports are slowly gaining across the stronger countries in the bloc. The news comes as a pleasant surprise at a time when a slowdown in China has fears running rampant that a continued tempering of the once-booming expansion in the communist country could have European industry poised to suffer.

However, that doesn’t appear to be the case for the moment as region exports rallied, growing 3 percent in June from May — following a previous contraction of 2.6 percent. The EU officially exited recession, and while growth remains incredibly weak for the most part, signs like these could be indicative of a robust recovery if policy and business conditions keep up.

Germany led the way from the EU where shipments grew by 6.3 percent — a continuation of a flurry of recently strong data coming out of Germany. Growth of 0.75 percent in the second quarter was also better than expected for the Euro-leader, and in Germany, July orders increased by the largest amount in 8-months.

Stefan Kipar, an economist at BayernLB in Munich, put this into perspective for Bloomberg, saying that, “The above-average big-ticket orders mean that the June number overstates the real economic dynamic. Still, given the discernible upwards movement in the confidence indicators, continued economic rejuvenation can be expected for the second half of the year.”

The United Kingdom is also trying to rally this summer, where the Markit PMI purchasing managers index soared to 54.6 – its strongest reading since summer of 2011. Manufacturing is expected to grow in the country by 1.9 percent next year as the recovery there struggles to take hold.

China is not the only market that could affect Europe, though, as a slowdown in emerging markets poses very tangible risks to the hopeful economy. A report released yesterday by Moody’s points out that, “The euro zone’s growth will mainly be driven by increased demand from the U.S. and emerging economies. A slowdown in these markets is the main risk to the outlook, along with any deterioration in the euro zone’s internal situation.” An emerging market slowdown has become a painful reality as China undergoes reform and Russia, India, and Brazil all struggle internally as well.

Hope remains between the EU and the U.S. to kick start growth as the two continents are engaged in talks for the largest free trade agreement in history. The agreement would reduce tariffs to near non-existent levels and eliminate red tape for firms hoping to compete across the ocean. The deal promises to be greatly valuable to each economy going forward.

However, with the end of quantitative easing potentially near, any shift in Fed policy that roils U.S. markets in the interim could threaten Europe as well. With the BRIC countries in a state of flux, the rally U.S. stock market and easy liquidity has been a source of strength for the European economy.