Fed Tapering: Baby Steps Are Better Than No Steps

U.S. Federal Reserve Chairman Ben Bernanke will hold a press conference Wednesday, at the conclusion of a two-day Federal Open Market Committee policy meeting that is currently underway, during which he is expected to announce a reduction in the flow rate of the Fed’s asset purchase program. This program of quantitative easing — the third major round since the onset of the late-2000s recession — has the Fed purchasing $40 billion worth of agency mortgage-backed securities and $45 billion of longer-term Treasury securities each month.

Broadly speaking, this program has been successful. As Federal Reserve Bank of San Francisco President John Williams put it back in May: “Overall, if we were in a car, you might say we’re motoring along, but well under the speed limit. The fact that we’re cruising at a moderate speed instead of still stuck in the ditch is due in part to the Federal Reserve’s unprecedented efforts to keep interest rates low. We may not be getting there as fast as we’d like, but we’re definitely moving in the right direction.”

But the stimulus can’t — and could never — last forever. The various iterations of QE have contributed to a dramatic expansion of the Fed’s balance sheet over the past few years. As of the second week of September, total assets held by the Fed exceeded $3.6 trillion, substantially above the $869 billion level maintained before the financial crisis.

This increase in and of itself has been cited as a reason to curb the flow rate of asset purchases. At a glance, the theory is that the larger the Fed’s balance sheet is, the riskier it becomes, and the process of unwinding the monster grows increasing difficult. Somewhat addressing this concern, the Fed has stated that it could very well hold on to securities through maturation and simply let them fall off the balance sheet that way. This is in some ways preferable to evaporating liquidity by selling them. 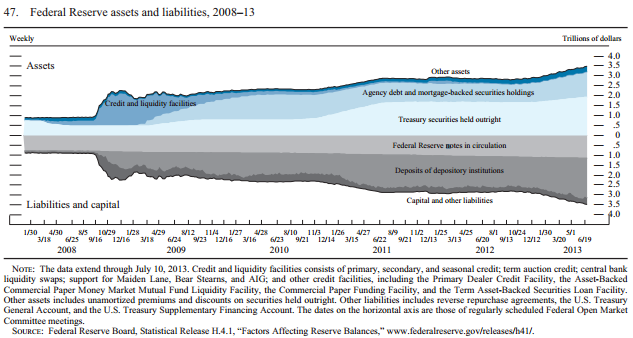 Whatever the Fed’s strategy for dealing with its balance sheet is, the first step is to taper — and then end — purchases. But this process, as economists and investors have learned over the past few months, will have far-reaching effects and could send a shock wave through global financial markets. Over the past few months, markets have adjusted in anticipation of an upcoming change — perhaps most notably, interest rates have risen nearly a full percentage point — but a dramatic change in policy could still have a dramatic effect on the markets.

Shortly ahead of the recent Group of 20 meeting, China’s vice finance minister, Zhu Guangyao, said in a press briefing reported by Reuters, ”United States — the main currency issuing country — must consider the spillover effect of its monetary policy, especially the opportunity and rhythm of its exit from the ultra-loose monetary policy.”

Central bank Vice Governor Yi Gang, at the same briefing, added, “On monetary policy, the focal point (of the G-20) will be on how to minimize the external impact when major developed countries exit or gradually exit quantitative easing, especially causing volatile capital flows in emerging markets and putting pressures on emerging-market currencies.”

With this in mind, the Fed is expected to execute a “taper lite,” reducing total purchases on the order of $5 billion to $10 billion per month at first, giving the markets time to adjust. Although this is a fairly soft touch and will do little to slow the growth of the Fed’s balance sheet, it is better than nothing.