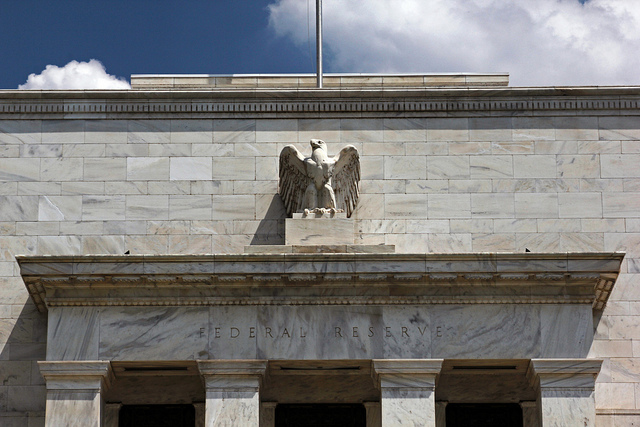 Testifying before Congress on Wednesday, Federal Reserve Bank of Dallas President Richard Fisher channeled the Revolutionary War patriot Patrick Henry in his opening remarks as he spoke about moral hazard in the wake of the 2008 financial collapse.

Fisher, appealing to Congress for action, quoted one of Henry’s speeches, in which the orator claimed, “Different men often see the same subject in different lights.” The Dallas Fed president used this preface to frame his argument against the 2010 Dodd-Frank Act. In his view, the law undermined the common goal of Americans to end “too big to fail” banking institutions.

Fisher’s argument focused on the lack of market discipline that larger financial institutions enjoy, noting that 0.2 percent of banks in America control two-thirds of all assets. He claimed these institutions still enjoy the guarantee of a taxpayer-funded bailout because of the way they are able to structure themselves, making the bulk of what the Dodd-Frank Act is trying to achieve moot.

Since the act explicitly recognizes these banks as “systemically important,” the law serves to perpetuate the risk, and though there is a provision for capital requirements and living wills, Fisher doesn’t think this will prove effective. Because megabanks are able to restructure themselves so effectively, the provision in the Dodd-Frank Act known as the Orderly Liquidation Authority is “an Orwellian nightmare,” Fisher said.

This provision will make it likely that the FDIC will provide debtor-in-possession financing to the larger banks through their smaller subsidiaries while the holding company is able to restructure itself, Fisher says, thus perpetuating a cycle of taxpayer bailouts, while growing the banks larger in the process. He ultimately concluded that the act makes these banks more dangerous by doing nothing to scale down the problem and only allowing banks and the accompanying bureaucracy to grow larger.

So what did Fisher propose? In what he calls a three-step solution, the Dallas Fed president recommends first restructuring the banks in a manner that makes none of them inherently important to the U.S. economy. He would only extend FDIC insurance to the basic commercial bank operated by each financial holding company, leaving depositors insured but those who engage in other financial arrangements such as securities trading, insurance, or real estate, without federal assistance of any type. The last part of his plan requires those doing such business to sign a waiver acknowledging they have no federal backstop.

At the end of his speech, Fisher again warned Congress of the moral hazard that now exists for banks. He urged the government to ignore the “siren song of megabanks” and quoted Henry once more: “It is natural to man to indulge in the illusions of hope. We are apt to shut our eyes against a painful truth, and listen to the song of that siren till she transforms us.”