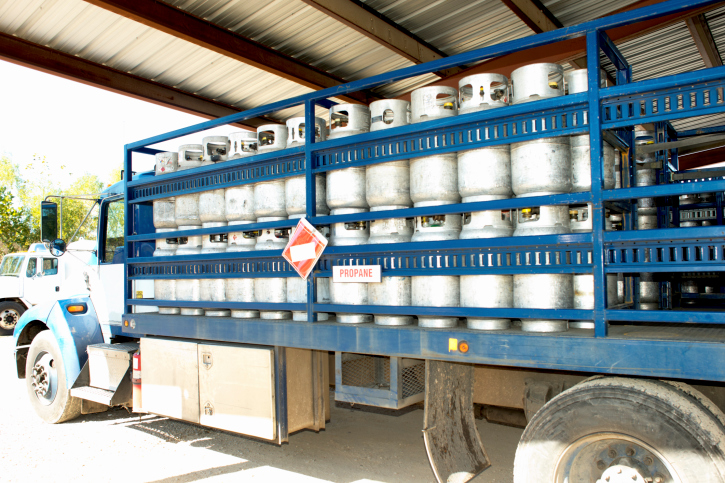 Ferrellgas Partners L.P. (NYSE:FGP) caught my eye after it had been on a steady rise this year up 17 percent year-to-date. The company distributes and sells propane and related equipment and supplies primarily in the United States. It transports propane to propane distribution locations, tanks on customer’s premises, or to portable propane tanks delivered to retailers. The company conducts its portable tank exchange operations under the Blue Rhino brand name through a network of independent and partnership-owned distribution outlets. The company’s propane is primarily used for space heating, water heating, cooking, outdoor cooking using gas grills, crop drying, irrigation, weed control, and other propane fueled appliances. It is also used as an engine fuel for power vehicles and forklifts and as a heating or energy source in manufacturing and drying processes. It serves residential, industrial/commercial, portable tank exchange, agricultural, wholesale, and other customers in all 50 States, the District of Columbia, and Puerto Rico. But the company just missed earnings estimates on the top and bottom lines. Is it time to sell the stock?

Adjusted earnings and gross profit reaching record levels. Adjusted earnings improved to $99.8 million from $98.5 million in the year-earlier quarter. Distributable cash flow to equity investors was $75.7 million producing distributable cash flow coverage on the partnership’s quarterly distribution of 1.2x. Gross profit increased 3 percent to $230.5 million on anticipated margin improvement. Reflecting the third-quarter performance and the establishment of midstream operations in May 2014, the partnership raised its fiscal 2014 adjusted earnings guidance to a record $285 million to $290 million, up from previously provided guidance of $275 million to $285 million. The partnership posted record adjusted earnings of $272 million for fiscal 2013.

Propane sales volumes for the quarter were 257.9 million gallons, slightly below a year ago, but consistent with planned levels. This year’s winter heating season was more evenly spread over the partnership’s fiscal second- and third-quarters contrasted with last year, which was heavily concentrated in the fiscal third-quarter. Operating expense in the quarter was $113.9 million, compared to $107.2 million in the year-earlier quarter, primarily reflecting the increased cost associated with meeting customer demand while contending with seasonably cold temperatures and propane supply shortages. General and administrative expense decreased to $12.2 million from $13.4 million, but excluding the timing of performance-based incentives was materially in line with the prior-year quarter. Interest expense declined 9 percent to $20.2 million, reflecting the favorable long-term debt refinancing completed last fall.

For the nine-month period ended April 30, Adjusted earnings improved to $262.6 million from $246.2 million a year ago, while distributable cash-flow increased to $190.6 million from $180.3 million. Propane sales volumes grew 6 percent, exceeding planned levels on nationwide temperatures that were 6 percent colder than normal. Gross profit rose 7 percent to $642.9 million, driven by higher sales volumes and, to a lesser extent, margins that improved $0.01 per gallon.

Looking ahead, the company is making the right moves to ensure future earnings. On May 1, the partnership announced the acquisition of Sable Environmental, LLC and a related entity “Sable,” a fast-growing privately held fluid logistics provider in the Eagle Ford Shale region of South Texas. The acquisition, which prompted the establishment of a midstream division, demonstrated the partnership’s commitment to strategic diversification and growth of cash-flow.

On June 6, the partnership amended its secured credit facility to better facilitate its strategic focus on further business diversification. Immediately following the amendment, the partnership increased the size of this facility from $500 million to $600 million providing increased liquidity for future acquisitions. On May 5, Ferrellgas acquired Viking Propane, based in Madison, California, which enhances the partnership’s strong California presence, extending the service territory west of Sacramento. Viking represents the fourth retail propane acquisition in the current fiscal year that began August 1. Speaking about the quarter and the acquisitions, President and Chief Executive Officer Steve Wambold stated:

I am extremely pleased with the way our propane operations team performed during what proved to be a very challenging quarter. While temperatures in the quarter were 5 percent colder than a year ago, the partnership contended with significant propane supply and infrastructure challenges that negatively impacted our efficiency metrics. However, these same industry challenges provided the partnership the opportunity to acquire many new customers due to service failures experienced by other provider. Blue Rhino posted a strong start to the grilling season this quarter, as sales transactions grew by more than 18 percent over prior year levels. The partnership continued to experience increased sales transactions in May from its Blue Rhino brand and we believe that this positive momentum will continue throughout the summer grilling seas. Sable’s management has hit the ground running, performing ahead of plan while capitalizing on growth opportunities.

In May, the partnership acquired a sixth salt water disposal site and began construction of a seventh site that will be operational in the fall of 2014 supporting the growth of our customer base. The partnership estimates the Sable operations will contribute $25 million of adjusted earnings in fiscal 2015. The business development team is assessing numerous opportunities to expand these operations and to further diversify cash flows from other lines of business. We look forward to further progress in this area in fiscal 2015.

Given the results, I think this stock is a good long-term buy. It pays a variable but bountiful dividend yielding 7.6 percent. However, the stock is trading at 41 times earnings. Thus, I would wait for a pullback before jumping into this stock. I would like to see the stock pull back under the $25 level before jumping in.

Disclosure: Christopher F. Davis hold no position in Ferrellgas partners and has no plans to initiate a position in the next 72 hours. He has a buy rating on the stock and a $29 price target.