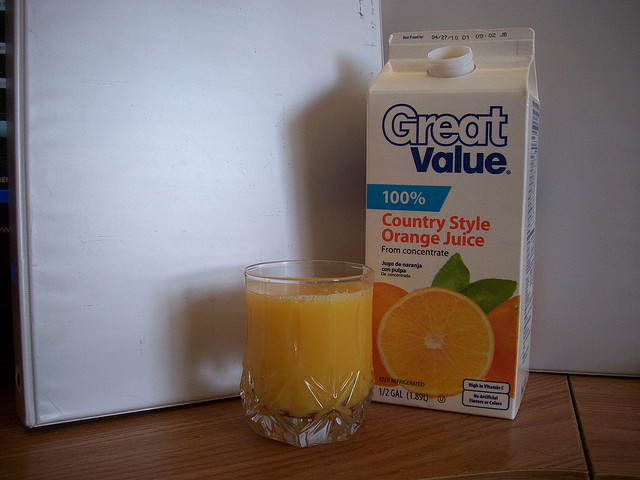 An insect — no bigger than the head of a pin — is wreaking havoc on the Florida orange industry. The Asian citrus psyllid is responsible for spreading citrus greening across the state, all of which is under quarantine for the disease. Citrus greening, also known as Huanglongbing, causes oranges to turn green, grow misshapen, and take on a sour taste. Infected citrus trees normally die within a few years.

Already, the forecasts for orange harvests in Florida are down. According to the December data by the United States Department of Agriculture, Florida orange production is expected to be 3 percent lower than November’s numbers. Hale Groves, a Florida-based citrus grower, says that the citrus industry in Florida accounts for more than 75,000 jobs, and is worth $10 billion annually. In the U.S., citruses, including oranges, grown in Florida supply 70 percent of the market, and is second only to Brazil in terms of growing oranges. Florida’s dominance in the orange juice market is even more impressive, with the state producing 90 percent of the U.S.’s supply.

Recognizing the severity of impact a devastated orange market can produce, the USDA announced a multi-agency response. ”USDA listened to the citrus industry’s request for more urgency and greater coordination on the response to HLB and is implementing an emergency response structure,” Secretary of Agriculture Tom Vilsack said in a statement.

“To jump start this initiative and affirm our commitment to industry, USDA is also providing $1 million to be used in support of research projects that can bring practical and short-term solutions to the growers in their efforts to combat this disease.” Companies, like the Coca-Cola Company (NYSE:KO) and Pepsico, Inc. (NYSE:PEP) will feel the impact of a limited orange market as well. This year, the USDA expects 121.0 million boxes of oranges will be produced by Florida. If this is the case, it will be a 9 percent year-over-year decrease.

Pepsico, so far, does not appear to have been affected. ”The chilled juice business as well, both in terms of base Tropicana as well as the innovation that we have with Tropicana Farmstand and Trop50, all continue to perform well,” the company’s Executive Vice President and CFO Hugh Johnston said in Pepsico’s 2013 third-quarter earnings call. In 2012, the U.S. imported 2.3 billion in oranges and orange-related products with the top supplier being Brazil. It is possible that imports will offset any issues for corporations, leaving the growers to be the main sufferers of the damaging effects of citrus greening.

Florida, however, isn’t the only orange juice market that has recently experienced issues. Coca-Cola, the parent company of Minute Maid and Simply Orange, incurred losses in 2012 due to Brazilian orange juice. The company discovered in 2011 that carbendazim residues were in orange juice Coca-Cola was importing from Brazil. Carbendazim is a fungicide not registered for use in the U.S. As a result, the company had to purchase additional Florida orange juice, which costs more than Brazilian. Charges to Coca-Cola during the nine months ended September 28, 2012 associated with the changes totaled $21 million.