It’s tough at the top, especially when you’re on top of the fast food industry and everyone is gunning for your demise. That’s the position McDonald’s (NYSE:MCD) is in, and just ask CEO Don Thompson — the chain has a lot of rivals on its hands. Taco Bell (NYSE:YUM), Starbucks (NASDAQ:SBUX), and Dunkin’ Donuts (NASDAQ:DNKN) are gunning for its monopoly over breakfast food, while Burger King (NYSE:BKW) is adamant about beating the burger chain at its own game.

Meanwhile, McDonald’s earnings have disappointed lately thanks to health-conscious consumers and a saturation of the marketplace. Its U.S. same-store sales have been down since the fourth quarter of 2013, with analysts not expecting them to turn around anytime soon. Case in point: Ronald McDonald definitely needs a Happy Meal.

We’ll start first with Burger King, because although the chain is a longtime rival of McDonald’s, it recently has been stealing more of the Golden Arches’ customers, a reality evident in its earnings figures. As reported by Benzinga, Brian Sozzi of Belus Capital Advisors highlighted on Jim Cramer’s The Street on Tuesday that while McDonald’s same-restaurant sales have been down since the fourth quarter of 2013, Burger King actually showed improvement each quarter in 2013. Burger King shares were also up 15.3 percent this year to date, while McDonald’s only gained 0.86 percent over the same period.

McDonald’s and Burger King have different marketing strategies, and that’s what Sozzi says differentiated the two from each other in 2013. While Burger King used emotional marketing techniques to sell its Angry Whopper, fried onion petals, chipotle sauce, and Satisfries, McDonald’s rolled out a number of menu items that were out of its expertise, and the offerings didn’t go over as well as executives had hoped. In that way, McDonald’s over-complicated menu didn’t helped its cause, a reality that even Thompson admitted in January, while Burger King’s simple, no-fuss offerings proved to garner attention in 2013.

As for Taco Bell, that’s an entirely different story, because although McDonald’s and Taco Bell have long sparred in the fast food sphere, their competition has been kept at bay thanks to their differing menu items. Until recently, that is. Taco Bell announced its new breakfast menu in March and launched in late in the month.

Yep, the Tex-Mex fast food chain will now offer you a Waffle Taco or a handful of Cinnabon Delights if you get to a location early enough. Taco Bell also capped things off with a catchy marketing campaign, and we should probably mention that in its commercial advertising the new Waffle Tacos, it took a major jab at McDonald’s –unsurprisingly, the Golden Arches jabbed back.

According to Digiday, in Taco Bell’s three TV spots, it advertises its breakfast menu with the help of real-life humans named Ronald McDonald who give good reviews of the breakfast items. All of the spots end with the line, “Delicious new breakfast everyone can love, even Ronald McDonald.” So far, the ad has gotten more than 1.6 million views on YouTube as of Digiday’s report on Wednesday.

That’s likely a burn that McDonald’s didn’t see coming, even though Taco Bell decided to “Live Mas” by rolling out its own breakfast delicacies. The world’s largest fast food chain still responded quickly, and it had a comeback out on Facebook just one day later. Per Digiday, McDonald’s posted an image of its mascot, Ronald McDonald, crouching down and petting a chihuahua — the old Taco Bell mascot — and the caption read, “Imitation is the sincerest form of flattery,” with a link to McDonald’s breakfast menu. 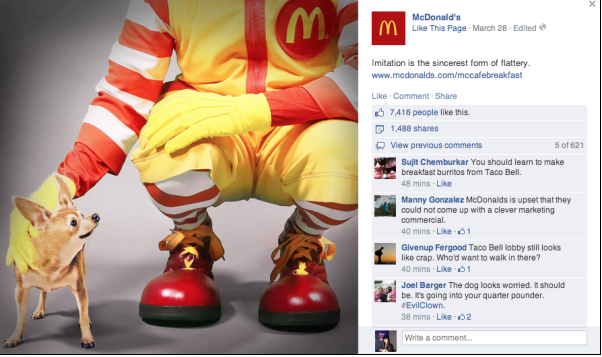 That quick retort helped McDonald’s win come fans, garnering more than 7,000 likes on Facebook, but unfortunately for the Oak Brook, Illinois-based chain, investors want positive earnings and not just attention on social media channels. The company will need to prove that it can take on these rivals and revive success.