European markets did not greet the day with enthusiasm, with most posting losses by mid-day trading. Germany’s DAX was off 1.38 percent, London’s FTSE 100 was off 0.39 percent, and the STOXX 50 index was off 1.23 percent. Concern about the economic stability of Cyprus seems to be weighing on traders.

1) Cyprus Asks For More Help, But Not More Money: “There is a big misunderstanding about this in the press this morning,” a European Commission official said, according to Reuters. “The Cypriots are asking for help in the form of technical assistance with structural funds absorption which is what we have committed to provide through the Task Force for Cyprus that is being established.”

The confusion began early on Friday morning when Cypriot President Nicos Anastasiades told reporters that he would send a letter to the European Commission and the European Council seeking some form of additional economic assistance. European finance ministers are projecting that Cyprus’s economy will contract 9 percent this year and nearly 4 percent in 2014 before returning to growth in 2015, when most of the EU is expected to round the bend.

However, this additional assistance is not in the form of more cash — the country just got 10 billion euros in loans that cost it nearly twice as much in austerity and asset sales. Instead, Anastasiades is asking about ways to use EU structural funds, which come from a different EU budget program, to help cope with economic growth in the mid-term…

2) Who Would You Pick? San Bernardino, a city in California that declared bankruptcy last August, has reportedly decided that bondholders, and not state workers, will be forced to take deeper losses. Reuters reports that nearly a year after it stopped paying contributions to Calpers — America’s biggest pension fund — the city will resume payments at the start of the fiscal year.

However, the city will not make interest or principal payments on $50 million in pension bonds issued in 2005. The city’s bankruptcy has in many ways become the centerpiece of a conversation about who should take priority in similar cases: bondholders or pensioners.

3) European Economic Volatility Highlighted By Industrial Production: Consensus seems to be that the economic situation in Europe will have to get worse before it gets better. Industrial production in both the euro area 17 and EU27 grew by a seasonally-adjusted 0.4 percent month over month in February, according to Eurostat. This is an unexpected increase compared against expectations for 0.2 percent growth. 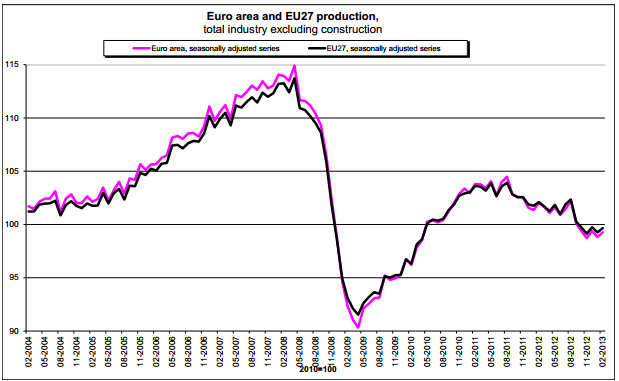