Gasoline Price Forecast: Will Americans Catch a Break in 2014?

“U.S. gasoline prices will indeed see huge swings and regional volatility in 2014,” reported GasBuddy on December 27, “but GasBuddy analysis suggests that when all the final figures are calculated, the average price next year will fall by about 10cts gal from 2013 numbers.” GasBuddy, an organization devoted to the study of gasoline prices, estimates that gasoline prices in the United States could hit an average of $3.399 per gallon in 2014.

If the forecast turns out to be true, the falling prices could be a much-needed tailwind for American consumers. Prices vary by time and place, but H&R Block estimated that the average American spent about $2,100 on gasoline in 2012. That estimate was calculated using a $3.80 per gallon price tag at a use rate of 558 gallons per year. (Fun fact, the average national gas tax is 48 cents per gallon.)

Fortunately for Americans on a tight budget, 2013 has been a better year for gas prices. The current nationwide average price of gas is just about $2.27 per gallon, and the full-year average was about $3.50. Assuming average gas use remained constant at 558 gallons, the typical annual gasoline bill in fell about 7.9 percent to $1,953 in 2013.

If prices continue to fall as projected by GasBuddy, the average annual gasoline bill could fall 2.9 percent in 2014 to $1,896 as gas prices fall to an average of about $3.40 per gallon. GasBuddy isn’t alone in its forecast, but it is on the optimistic side of the spectrum. The U.S. Energy Information Administration calculated that the average price of all grades of gasoline was $3.57 in 2013, and that prices will fall to $3.49 on average nationwide in 2014.

The EIA also projects that demand for gasoline will decline over the next several years, and that prices could fall as low as $3.03 per gallon by 2017, before climbing back up to $3.90 per gallon by 2040. Much of this decrease in demand can be attributed to increased vehicle fuel efficiency.

This forecast goes hand in hand with the price of WTI crude oil, which is projected to decline from an average of $97.64 per barrel in 2013 to $95 per barrel in 2014. The price of oil accounts for as much as two-thirds the cost of gasoline, and increased energy independence in the U.S. should translate into more stable and lower prices at the pump. 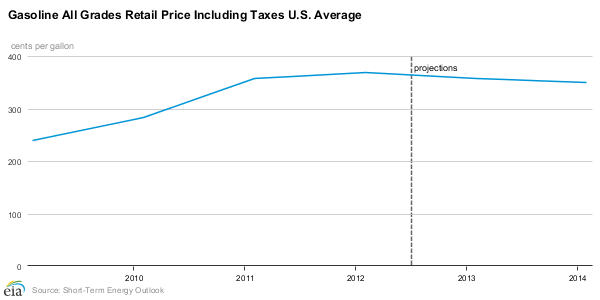