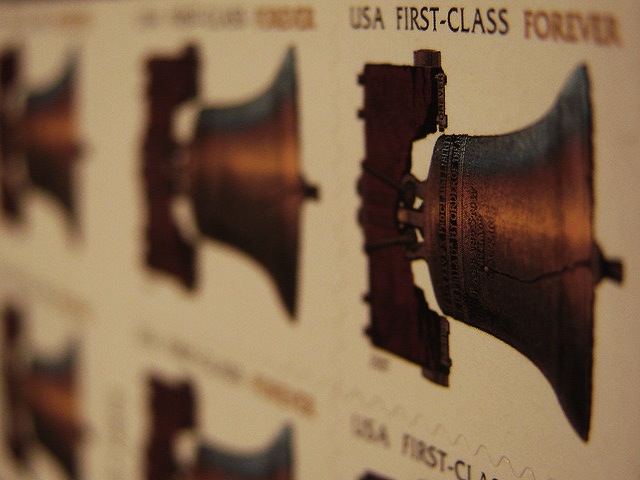 Stock up on your forever stamps — first-class postage is increasing by 3 cents on January 26, 2014. The Postal Regulatory Commission voted to temporarily raise the price of postage in order for the United States Postal Service (or, USPS) to recoup revenue lost during the Great Recession. Sending a letter will now cost 49 cents.

“The Postal Service will be reimbursed for exigent losses that can be reasonably quantified. We have determined that amount to be $2.8 billion to cover the 25.3 billion pieces of volume lost between 2008 and 2011,” Commission Chair Ruth Y. Goldway said in a statement. “The funds will come from a rate surcharge that will last just long enough to recover the loss.”

Acting in accordance with the Postal Accountability and Enhancement Act of 2006, the Commission required USPS to show an exigent increase above the Consumer Price Index cap is necessary, and reasonable. In its 2-to-1 decision, the Commission determined that there was a need for the increases caused by the Recession, but disagreed with the Postal Service that the 3 cent boost should be permanent.

The Postal Service had intertwined declining usage due to the Internet and losses from the economic downturn. USPS must report its quarterly results to the Commission, which can then establish a timeline for phasing the increases out. According to the statement, one cent of the increase was an inflation-based adjustment. The other 2 cents are part of the attempt to recover Recession-related losses.

Mary G. Berner, President and CEO of the Association of Magazine Media (or, MPA) reacted to the decision, saying that, “This is a counterproductive decision by the PRC and it does nothing to fix USPS’s systemic problems. It will drive more customers away from using the Postal Service and will have ripple effects through our economy — hurting consumers, forcing layoffs, and impacting businesses.” Berner left the door open for MPA to appeal the decision.

In September, the Federal Times obtained documents showing USPS had hired consulting firm Faith Popcorn’s BrainReserve for $566,000 to study the future of stamps. “Who will be buying stamps in 2019, 2024 and 2034? What will they be used for? How can we embed innovation and new thinking into stamps, to engage America’s coming generations,” the USPS directive asked.