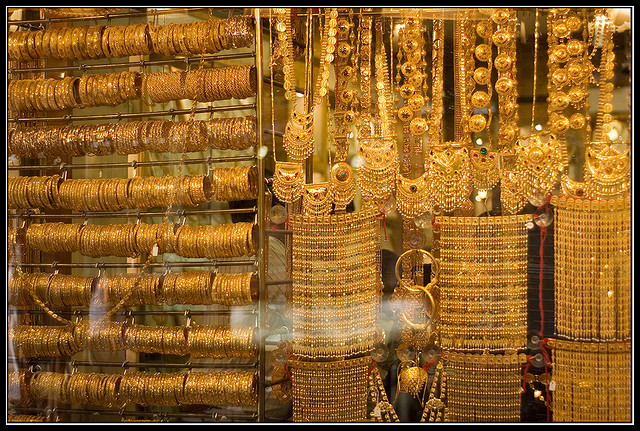 The bear market has generally hit the smallest gold miners, with no revenues, the hardest. Often, these companies are sitting on gold resources but they need funding in order to develop their mines, and with low gold prices, financiers are simply not willing to put forth any capital. As a consequence, the market refuses to recognize the value of these companies’ assets, as it anticipates that they will either gather dust or that the companies in question will issue more stock in order to raise the capital they need.

The result is that there are companies out there trading at a small fraction of the value of their resources. For those bullish on the gold price, this can be an incredible opportunity, because if the gold price rises, financiers will be more willing to fund these projects, especially if they can get some of the gold through a royalty as a part of the loan agreement. Thus, not only will the intrinsic value of these companies’ projects rise, but the shares of the companies that own them will trade at higher fractions of their properties intrinsic values.

That is the good news if you own shares in of these companies and the gold price rises. The bad news is that these companies often don’t have any capital, and they need to keep issuing stock in order to pay their employees or to explore for more resources. Investors in these companies need to accept the risk that their shares will continually represent a smaller portion of the company over time until the gold price rises. As an investor who likes to take a chance in some high risk-high reward equities with some of his portfolio, I went hunting for a company that fit such criteria and came up with Canarc Resources (CCM.TO).

Canarc Resources is a penny stock with a share price of just 6 cents and a market capitalization of just $6.9 million. The company owns two properties, one of which — New Polaris in British Columbia, Canada — is of particular interest. New Polaris already has a sizable defined underground resource base of between 1 million ounces of gold and 1.3 million ounces of gold, depending on the grade of the ore that the company counts in its resources (a higher grade means that it is cheaper to mine).

For a company with a valuation of just $6.9 million, the results are extremely promising. In a nutshell, the mine can produce more than 70,000 ounces of gold per year for 10 years at about $1,000 per ounce, and it will cost about $85 million to build. Still, using conservative estimates and a $1,200 per ounce gold price, the company estimates that the project is worth more than $80 million. Furthermore, the property’s value rises substantially if the gold price goes up. For instance, the proposed mine has a valuation of $275 million at $1,800 per ounce gold.

In addition to the disparity between the company’s valuation and the valuation of New Polaris, we should consider the fact that Bradford Cooke is the company’s chairman, and up until very recently, he was the company’s CEO. For those who don’t know, Cooke built Endeavour Silver (NSYE:EXK) into a gold and silver producer with three mines and more on the way. He recently stepped down as CEO of Canarc Resources and hired Catalin Chiloflischi, but he will still have an active role as the company’s chairman.

As great as all of this sounds, we still must address one question: How will Canarc Resources build the mine if it doesn’t have $85 million, or more generally, how will it bring out the value of New Polaris without punitively diluting shareholders?

As management said in its third-quarter release, it wants to try to find a partner to finance New Polaris’s development. While no deal has been made, the general idea would be to sell a portion of New Polaris to a JV partner that would put up all or some of the capital needed to build the mine. In fact, this is probably why Chiloflischi was hired, as he has experience in mergers and acquisitions and dealmaking.

Making such a deal has pros and cons. The bad news is that the company is at a point where it really needs to do something like this now, and with the gold price depressed, the property’s value is depressed, as well. There is little doubt that the company will surrender a sizable amount of New Polaris’s upside potential.

The good news is that Canarc will retain some of the property’s upside, which includes both leverage to the gold price and exposure to the possibility that the mine’s life can be extended beyond what was proposed. This alone means the company is worth far more than the $6.9 million valuation the market is ascribing to it.

That being said, I think Canarc Resources is an intriguing speculation stock for those who believe the gold price is going to rise from here. Investors should only put a small amount of capital into a stock like this one, given the risks involved. Furthermore, with investments such as these, I like to sell half of my position should the stock double. Investors should come up with their own guidelines for speculation, but first and foremost, be careful!