Gold’s Downtrend: This Too Shall Pass

Gold is down nearly 25 percent year to date and down nearly 35 percent since its September 5, 2011, high of $1,921. The downtrend has now exceeded two years.

Hardly sounds like an asset in which you’d want to invest.

But the core reasons for holding gold haven’t changed. How, exactly, do the G7 countries escape their morbidly obese levels of debt without causing serious repercussions? Can you really print money at never-before-seen levels and have no negative consequences? Interest rates may rise, what would normally detract some investors from gold, but what if inflation rises faster?

On a fundamental basis, it seems more prudent to buy gold now than it did in 2007. Which means that the two year-plus downtrend will pass, sooner or later. No bear market (nor bull market) lasts forever.

History confirms this. Perhaps the most relevant period to today is the mid-1970s. In spite of many reasons for gold to rise then, the price fell — dramatically and determinedly. But eventually fundamentals prevailed and ushered in one of the greatest gold bull markets in modern history.

Here’s how our current downtrend compares to that bear market cycle. 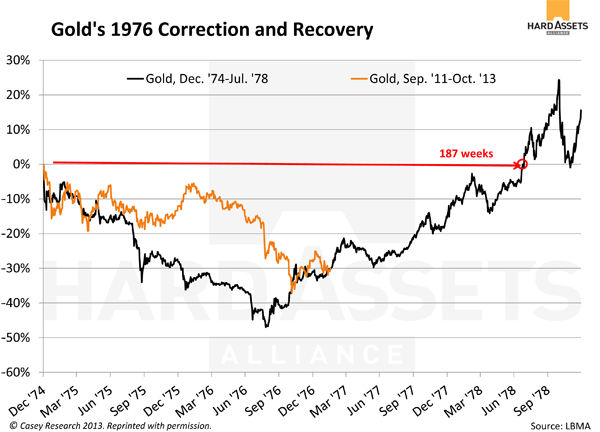 As you can see, during the big correction of the mid-1970s, gold declined 47 percent and took 187 weeks to recapture old highs. Our current downdraft hasn’t been as deep, but it’s lasted longer.

Based on this comparison, it thus seems reasonable to expect that gold will need another year or two to regain the $1,900 level and continue beyond. Barring a black-swan event, this year, gold will likely log its first annual loss since 2000. These are not predictions, just possibilities, and a reminder that if gold is slow to recover, you’ll know it’s simply adhering to past trends.

However, it’s not all bad news. As the chart shows, gold nearly doubled in the two years from its ’76 low to its ’78 former high. Investors didn’t need to worry about missing the bottom, either: Those who waited to buy until gold had retraced 30 percent of its decline still netted about a 70 percent gain once it returned to prior highs.

Here’s the comparison with silver. 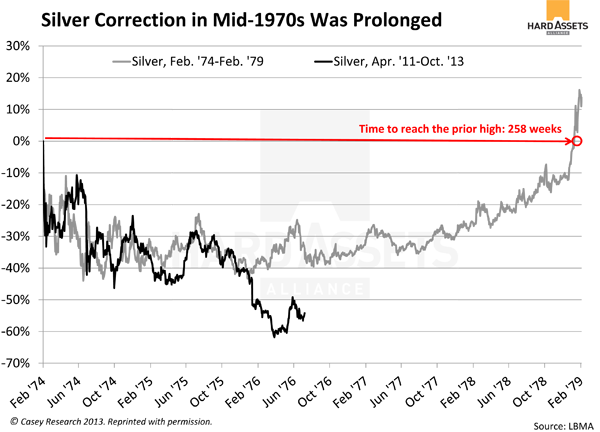 Unlike gold, our current selloff is deeper than that of the mid-’70s. But the bigger point is the lag back then: After abruptly falling more than 40 percent, silver traded in a range for about three years.

This hints that a swift return to silver’s prior peak is unlikely. It needs time to consolidate. Again, this isn’t a prediction but rather a forecast based on a similar setup from history.

In the big picture, remember that silver handily outperformed gold in the last great bull market — a feat I think it will repeat.

Don’t let the long recovery times shown in the charts deter you. Stay focused on the pattern. Once the declines reversed, the general trend was up. Contrarians and forward-thinking investors need to prepare for that reality, rather than take umbrage with how long it might take to start a new uptrend. By the time mainstream analysts – who know little about gold in the first place – declare it has entered a “new” bull market, the lows will be long behind us, along with the best buying opportunities.

Selloffs Can Be Profitable Setups

But keep in mind that the process was multiyear and began after a dismal two-year decline that was punctuated with sharp selloffs. This is similar to gold’s behavior since its 2011 high. Also, the biggest gains were seen in the final five months. The patience of some investors would certainly have been tested in those first three years.

Here’s a look at the gains for gold and silver from their respective lows.

Both gold and silver logged double-digit returns every year after the bottom (except silver for the first year). Once the momentum had shifted, buying and holding while the fundamental forces played out led to huge profits.

No “trading” was necessary; just buy after a big correction and hold on for the ride. No need to attempt to time the bottom, either: Those who bought a year after the lows still reaped gains of 490 percent for gold and 996 percent for silver. The largest chunk of profits came in the second year and beyond.

Also of note is that this second leg up in precious metals was bigger than the first one seen earlier that decade. Given that our Mount Everest level of debt cannot and will not resolve itself without significant levels of currency dilution, there’s no reason to think we won’t experience a similar outcome this time around.

Don’t Miss: Is Detroit Ready to Take Its Next Step as a Bankrupt City?