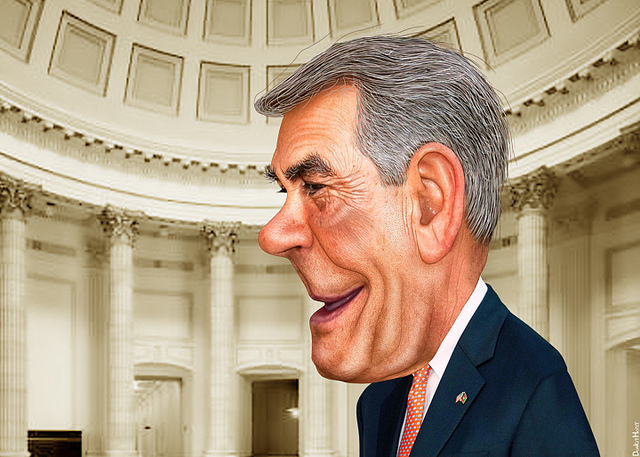 October 1 marked an important day in the history of the Affordable Care Act, the most ambitious social program implemented in the United States since Medicare was passed in the 1960s. The irony is that the individual insurance exchanges opened the same day as the government was shut down because lawmakers in the House and Senate could not agree on whether to fund the health care law.

Brinksmanship politics led to a shutdown of the United States government, the first in seventeen years and the eighteenth in the history of the country, and put negotiating an increase to the debt ceiling in jeopardy. However, there are unexpected consequences.

A great deal of damage has been done to the reputation of the Republican party. Polls conducted by Gallup and the Wall Street Journal in conjunction with NBC show that that tough stance Republicans in the House of Representatives took against the White House and Senate Democrats over federal government spending has pushed the party’s public standing to a record low.

Gallup’s October 9 survey showed that just 28 percent of respondents held a favorable opinion of the GOP, down from the 38 percent recorded in September and lower than 1999’s 31 percent. More than 6 in 10, or roughly 62 percent, of Americans now view the party unfavorably — a record high.

The public is not singling out the Republican lawmakers as the only party responsible for the current government stalemate, but much more blame has been assigned to the GOP. For the Democratic party, public opinion has dropped, just not on the same scale of the Republicans. Democrats lost just 4 percentage points of public opinion, with 43 percent of Americans holding a favorable opinion of the party. 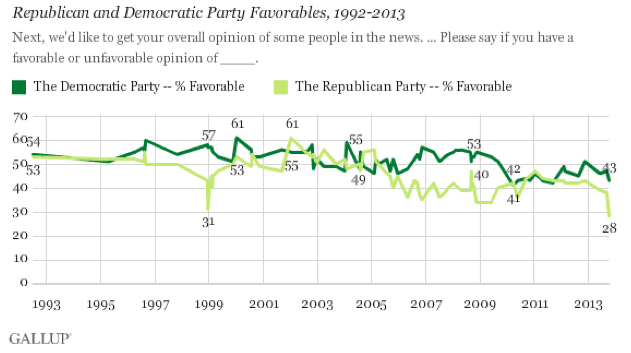 The elephantine drop in the approval rating of the Republican party “contrasts with previous Gallup findings from just before the government shutdown showing the Republican Party making up ground on a few key issues,” wrote the research firm’s Andrew Dugan. “Thus, the Republican Party’s current strategy in the fiscal debates may not be paying dividends.”

Even more significantly, last week’s Wall Street Journal/NBC poll found that the harder the Republican party has fought the Affordable Care Act, the more unpopular the party has become. Its staunch opposition to any spending bills funding Obamacare, a stand that precipitated the government shutdown, backfired.

Opinion of the health care reform has begun to shift since the shutdown began October 1 as well. 38 percent of respondents now see Obamacare as a “good idea” and 43 percent see it as a “bad idea,” up from the 31 percent who said it was a good idea and the 44 who said it was a bad idea last month. Plus, 50 percent responded that they oppose eliminating funding for the Affordable Care Act from any spending bills, even if it means a government shutdown, an increase from the 46 percent who said they opposed defunding Obamacare in the September 2013 CNBC poll.

According to the Wall Street Journal/NBC poll, American voters prefer a Democratic-controlled Congress to a Republican-controlled one by eight percentage points — 47 percent to 39 percent. Those results “could almost make a Democrat smile” if “it were not so bad for the country,” said Democratic pollster Peter D. Hart.

“These numbers lead to one inescapable conclusion: The Republicans are not tone deaf; they are stone deaf,” he added. More evidence of the deafness of both parties is that fact that a plurality of Americans, 52 percent, believe the government should do more to solve its problems while 48 percent disagree. That division has changed since June, when public opinion was split, 48 percent to 48 percent, on whether the government should do more or less.

The only good news for Republicans is that the public disapproves of Obama’s position that he will not negotiate with Republicans until the government is reopened by a margin of 43 percent to 40 percent, and 51 percent of respondents to the poll believe he has put his political agenda ahead of what is good for the country. By comparison, 70 percent of respondents said congressional Republicans have put politics ahead of national well being. Yet, Obama “comes into the fight in as good of shape as he entered it,” said Hart.