Gun Control: Which Side Has More Passion?

The debate over firearms has ignited a wave of emotions and political rhetoric over the past several months, but some people clearly feel more strongly about the issue than others. 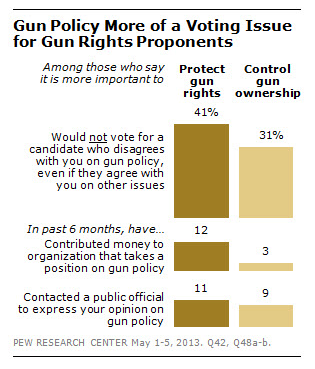 Gun rights advocates are highly likely to rule out a candidate with whom they disagree on gun policy. In a recent survey conducted by the Pew Research Center, 41 percent of gun rights supporters say they will not vote for a candidate that does not share their same views on gun control policies, even if they agree with the candidate on most other issues. Only 31 percent of gun control supporters say gun policy is a make-or-break issue.

The survey was conducted in early May, shortly after the Senate rejected a measure to expand background checks. Earlier this year, President Barack Obama and Vice President Joe Biden rolled out a wide-ranging list of executive actions regarding gun control. Obama also called on Congress to expand background checks on all gun sales, ban military-style assault weapons, and ban capacities of more than 10 rounds. After months of discussions and finger pointing, Congress did not answer Obama’s call.

The measure received only 54 votes, six votes short of the 60 needed to advance. Although the bill had co-sponsorship from both political parties, five democrats broke from party lines, and only four GOP senators voted in favor of the bill. The Senate also blocked a proposal to ban semiautomatic rifles and high-capacity ammunition magazines. 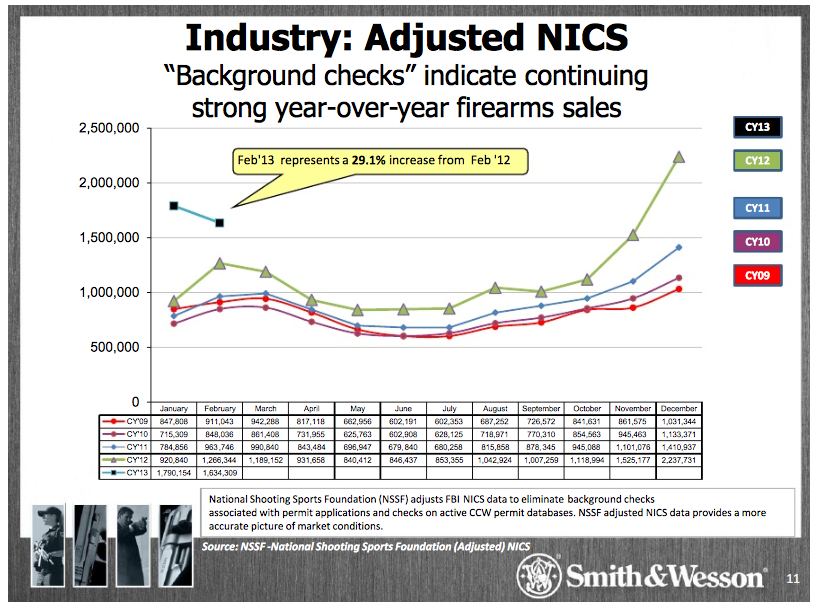 As the chart above from Smith & Wesson (NASDAQ:SWHC) shows, background checks for February were down from January, but 29.1 percent higher from a year earlier. According to an analysis of the gun industry by The Associated Press, the federal government has conducted roughly the same number of background checks for gun owners and prospective buyers under Obama’s first term, as it did under George W. Bush’s first six years of presidency. For the first time since 1993, the number of federally licensed retail gun dealers in the U.S. increased in 2010 and 2011, adding 1,167 more licensed dealers.

Don’t Miss: The ‘Recovery’ is Weaker Than You Think