Halloween 2015: The 10 Most Popular Adult Costumes

It’s that time of year when every bed sheet and political character can be turned into a costume at a moment’s notice. Halloween is upon us, and the money spent this year will likely total close to $7 billion, according to the National Retail Federation. Though a large chunk of that is spent on Snickers bars and SweetTarts to hand out to trick-or-treaters, there’s a significant amount spent on costumes as well. Among the pint-sized minions and fairy-tale princesses, adults are also gearing up for the holiday — and spending more to do it.

American consumers will spend an estimated $1.2 billion on adult costumes in 2015, more than the $950 million on children’s costumes. There are ways to save a little money throughout the season without giving all your money to ghosts and ghouls, but more than 157 million Americans said they’re in the holiday spirit, and plan to shell out about $74 per person.

“It’s easier than ever for consumers to find creative Halloween costumes given the popularity of Pinterest and Instagram and the immediate access to pop culture trends,” said Pam Goodfellow, the Prosper Insights principal analyst.

The retail federation conducted a survey of 6,754 consumers and tallied the most popular costume choices for children and adults. Movie themes were extremely popular for children, with many saying they planned to dress up like a minion, or a character from Frozen or Batman. Disney will also be glad to know that Star Wars costumes are making a comeback, perhaps in anticipation of the December release of Star Wars: The Force Awakens.

Despite the election being more than a full year away, it looks like there will be plenty of Hillary pantsuits and Donald hairpieces to go around — impersonating political figures was in a three-way tie for the No. 10 most popular costume.

For the most part, you can find deals on costumes online if you allow enough time for shipping. The most popular costume, a witch, can vary between $25 and $85, but accessories can often take the tally even higher. Other costumes, including a classic Batman getup, can be anywhere from $50 to more than $200 or even $500, depending on how authentic you want your six-pack to look. Batman costumes also topped the list from a survey of eBay searches, TODAY reports, meaning you’re likely to see plenty of caped crusaders this year.

Other polls show that 84% of Americans are planning to dress up for Halloween this year. Influenster’s poll shows the breakdown of most popular costumes by state, with larger states like New York and California electing for traditional characters like Snow White and Alice in Wonderland. Disney appeals to all ages, it seems. 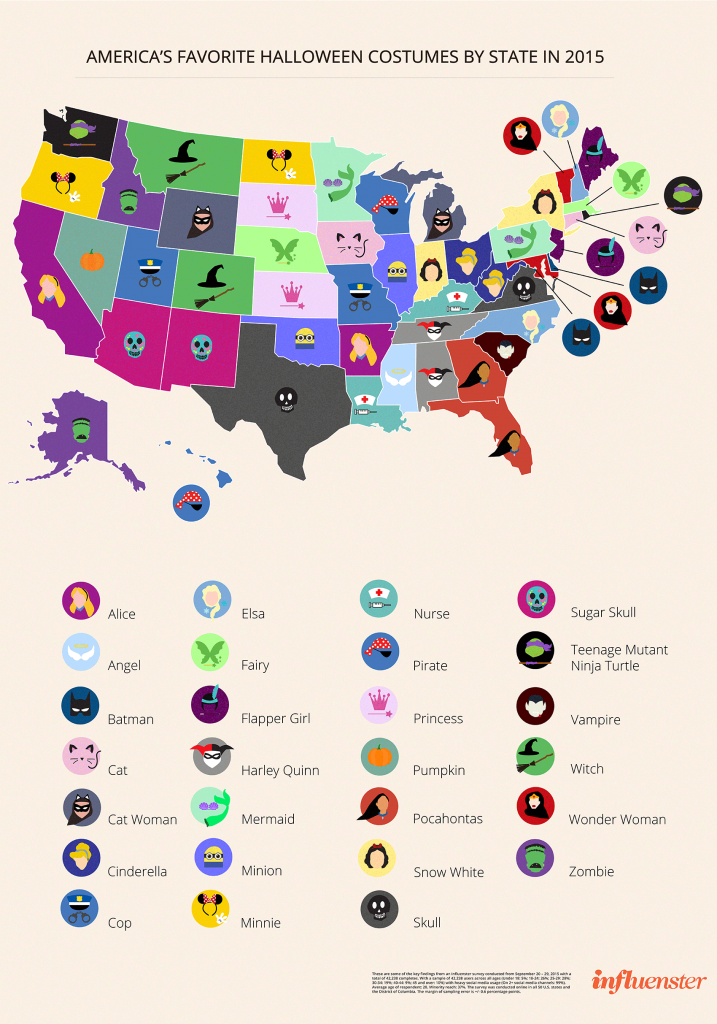 If you want to fit in with the crowd at your Halloween party, trying one of the most popular getups will ensure you can stage a “who wore it best” sort of event. If you’re looking to be more original, try our list of alternatives, most of which you can put together for just a few dollars.