Here Are a Few Reasons to Like Silver Wheaton

The last three years have given long-term silver investors an excellent chance to buy on the way down, as we’ve pulled back steadily since April 2011. As the price has come down I have been recommending for some time to dollar-cost average and/or pyramid down into silver. So far, 2014 has been a year of stabilization in the silver price. Despite the short-term pressure on the metals in 2012-2013, I have continued to suggest that gold and silver prices have long-term tailwinds in the form of extensive inflationary pressures.

I cannot say with certainty that we will not see some deflation, but I think that once inflation picks up, it could be severe. While gold is a straightforward way to benefit from the long-term currency debasement occurring globally, I believe that silver is poised to outperform in the next decade. As such, the purpose of this article is to discuss my favorite stock play in the silver space.

Silver Wheaton (NYSE:SLW) operates as a worldwide silver streaming company. Silver streaming is basically a process by which the company purchases a mining firm’s silver production in order to distribute that silver in the market. Silver Wheaton has contracts to purchase silver in bulk at prices well below market value and then proceeds to sell the silver at a higher price.

Other than holding physical silver, Silver Wheaton is, in my opinion, the perfect long-term dividend-paying silver equity. It is best positioned to take advantage of the coming rise in silver prices. And when it does, dividend growth is likely to follow. Compared with other silver companies, Silver Wheaton also has the most reserves of any silver company (Figure 2). This means that once prices rebound, margins, revenues and earnings are likely to grow faster than its peers and can likely be sustained for a longer period given its number of deals. 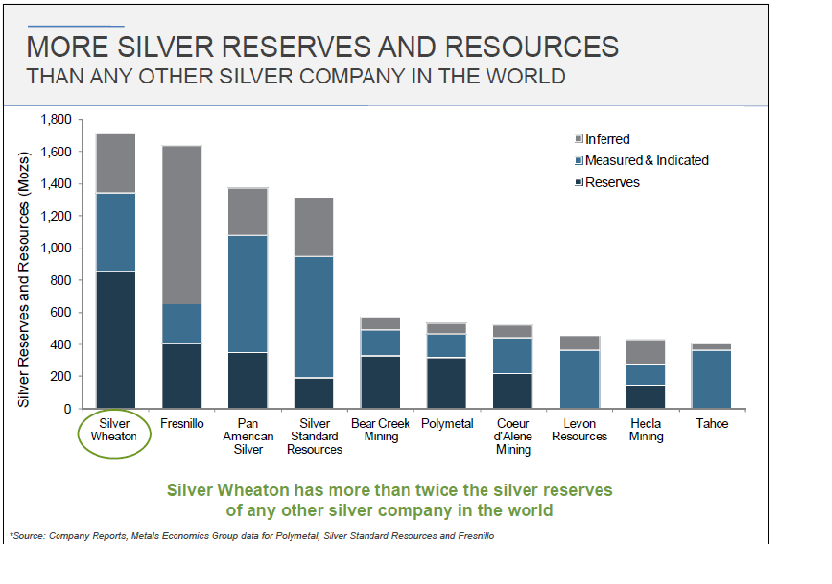 With Silver Wheaton having a large reserve base, it is well positioned given its business structure. Essentially, the higher silver goes, the more it feeds the bottom line, because Silver Wheaton has provided upfront financing for most projects in exchange for buying silver at fixed prices. Thus, with silver just a few dollars above its recent lows, it may be a good time to establish and build a long-term position, considering the company has been reporting very strong results.

Silver Wheaton currently trades at $21.40 and has a 52-week trading range of $17.75-$29.17. On average, about 3.8 million shares exchange hands daily. The company trades at a 23.7 multiple but only a 1.16 five-year PEG ratio and currently yields 1.5 percent. The company also most recently declared a 7 cent dividend per share.

Bottom line: Those investors who wish to gain exposure to silver long term can consider investing in the individual silver companies in addition to physical coins and bullion. At current levels, I believe silver and silver companies are opportunity buys, especially for the long-term investor. Over the long term, the price of silver is set to appreciate as a result of central bank stimulus, which in turn will feed the top and bottom lines of the silver companies. Thus, with increased profit, there is a strong possibility that companies could increase the dividends paid to shareholders, which if reinvested over the long term back into the stocks, could lead to compounded returns for years to come. Silver Wheaton represents my favorite play in this space.