Here Is How the Job Market Is Shaking Off Political Troubles

Firings have not increased in the wake of the 16-day partial shutdown of the federal government. Unemployment data is no longer as muddled from Washington’s manufactured political crisis, meaning the Department of Labor’s Thursday release of jobless claim numbers is a much more accurate depiction of the trajectory of the labor conditions than the market has been given for several weeks.

The Bureau of Labor Statistics data showed that in the week ended November 2, initial claims for unemployment benefits decreased by 9,000 to a seasonally adjusted 336,000, the fourth consecutive weekly drop. Still, analysts had been expecting a slightly greater decline to 335,000 new claims. 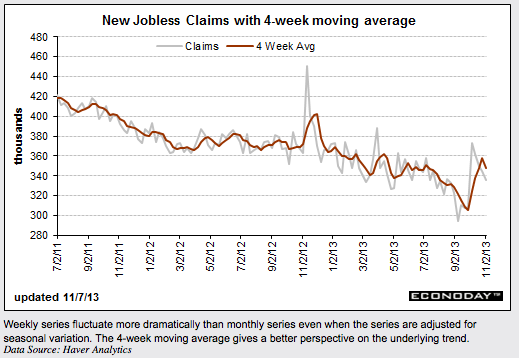 Initial claims data — which serves as a proxy for layoffs — is only one part of the story. Job growth has been comparatively much weaker. Before Washington’s political drama, the number of Americans applying for unemployment benefits had been trending down. But the falling applications was not accompanied by increased hiring as is usual. Hiring has slowed in recent months rather than accelerating. Stepping back to look at the larger picture, the hole left in the jobs market left by the recession is still gaping. More than four million people have been out of work for more than six months and more than 11.5 million in total are looking for a job.

“We’re still seeing a very low trend of job destruction, but this is just one side of the equation,” said Raymond James chief economist Scott Brown told Bloomberg. “The big issue for the job market over the last couple of years has not been job losses, it’s really been an issue of job creation, and that’s what we’re waiting for.”

The United States may be waiting for at least another month for hiring to pick up. According to a survey of economists conducted by Reuters, non-farm rolls are expected to have added only 125,000 jobs last month — a marked drop from September’s 143,000 net additions. While it is considered less authoritative than the Department of Labor’s monthly Employment Situation Report, national payroll processor ADP’s October employment report, released at the end of last month, was a dismal precursor to the governments figures, which will be made public on Friday.

Last month’s job creation was shockingly low; economists had expected ADP to report that employers added 150,000 jobs to their payrolls in October, but data showed that payrolls expanded by just 130,000. The Labor Department will release its October jobs report on Friday morning. As long as the labor market improves only modestly and income growth remains relatively stagnant, as it has since the end of the recession in June 2009, many American consumers will continue to be in a difficult position. If American consumers are in difficult position, so is the economy — consumer spending accounts for approximately 70 percent of gross domestic product. Since government and business spending have remained weak, the economy is depending even more on household spending to fuel growth.

However, data suggests that companies should be feeling more confident, and therefore more disposed to expanding their workforces. Excluding September, automobile sales have been strong, the housing market has momentum, and the manufacturing sector has shown signs of accelerating.