Why Your Paycheck Is Smaller Than It Should be 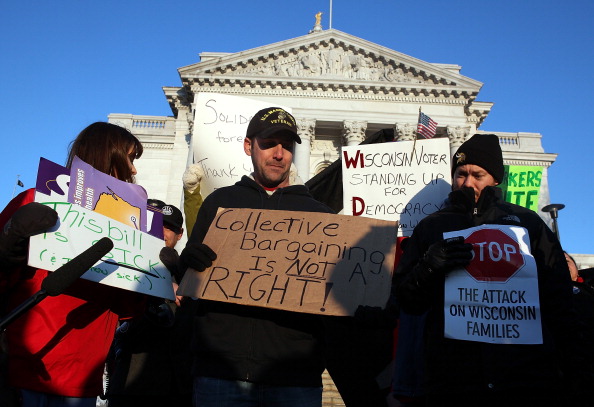 With employment up, the stock market sailing at near record-highs, and the post-crisis economic turmoil receding into the background, policymakers and economists are set to take on a new challenge: figuring out why wage growth is so flat, and what to do about it.

Between September 2013 and September 2014, wages grew only 2.2%, according to the Bureau of Labor Statsitics. There have been plenty of theories so far about why, and because wage stagnation is a vastly complex problem it’s likely that many of them are (at least partially) correct. For example, analysts from The Heritage Foundation have blame reduced labor demand, government regulation, and an increased labor supply as adding to the problem.

A piece from the Economic Policy Institute has thrown out another possible explanation: the erosion of collective bargaining. The authors, Lawrence Mishel and David Cooper, state that since rates of union membership have declined over time — and since unions play a strong role in setting wage standards in many industries — wages have declined as well.

As we can see in the chart below, they may definitely be on to something. 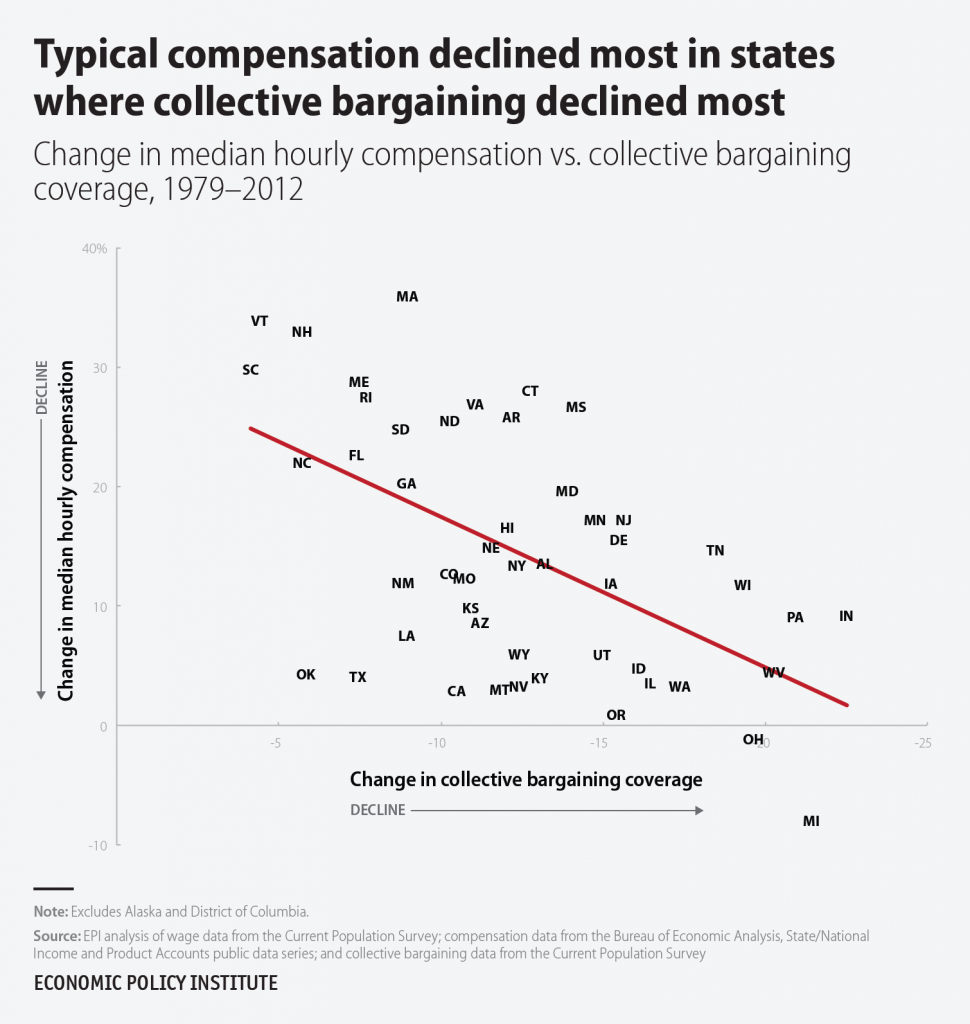 In the graph below, you can see that wages and productivity diverged at some point in the 1970s, and since then, the gap has become ever more pronounced. We also know that union membership has steadily declined over the same period (the reasons for which, we’ve explored previously), and the two events have more or less followed the same trajectory. Or rather, wage growth really hasn’t accelerated as union membership has dwindled.

Is that an effect of natural economic forces at work, or of business-friendly policy making it harder and harder for unions to remain in power? It’s probably a bit of both, though it’s hard to deny that unions have been cast in a more negative light over the past decade, leading to political showdowns with big business figures like the Koch brothers and politicians like Wisconsin Governor Scott Walker.

But getting back to what the EPI’s Mishel and Cooper are theorizing, the authors note that “The 10 states that had the least erosion of collective bargaining saw their inflation-adjusted median hourly compensation grow by 23.1% from 1979 to 2012, far faster than the 5.2% growth of the 10 states suffering the largest erosion of collective bargaining — a gap of 17.9 percentage points in compensation growth.” 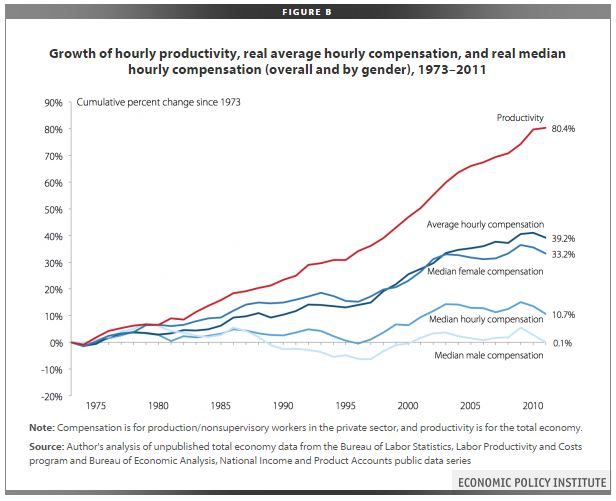 The data drive home the notion that collective bargaining and wage growth are closely linked, but with this in mind it’s important to also note that there are other reasons that the productivity-wage gap could have become more pronounced over the past 40 years as well.

For example, advances in technology allowed workers to become more productive within the same amount of time. The rapid expansion of America’s population — some from immigration — has also led to a surplus of available labor, working to the advantage of business owners in the form of lower wages. While the diminishing of union power, the flowering of “right-to-work” states, and less collective bargaining have played a role in lowering wages, there are other forces at work too.

But what should be taken into account going forward, both in crafting policy and in addressing issues related to inequality, is the role that organized labor and collective bargaining do play in the process. Mishel and Cooper highlight significant differences between states that have varying levels of erosion in collective bargaining. Now it’s just a matter of whether or not that will be taken into account by workers, business leaders, and politicians when trying to solve the wage stagnation problem.