Here’s How Pharma Stocks Are Outperforming the S&P 500

The SPDR S&P 500’s (NYSE:SPY) 23 percent jump so far this year is impressive, but the pharmaceutical sector has proven to be an even better bet. Since January, the SPDR S&P Pharmaceuticals ETF (NYSE:XPH) has jumped 43 percent higher, outperforming the S&P 500 by 20 percent or nearly double. While a lot of uncertainties remain within the healthcare system, the innovation coming out of the pharmaceutical sector continues to drive financial results and equity valuations higher.

New drugs and research advances have led the pharmaceutical industry to outperform many other segments of the S&P 500, but the Affordable Care Act (“ACA”) could prove to be its greatest catalyst moving forward. According to GlobalData of London, the new healthcare law could bring in between $10 billion and $35 billion of additional profit over the next decade, helping the industry expand 33 percent to $476 billion in size by 2020.

Despite expiring patents on blockbuster drugs and the cost of implementing the ACA, pharmaceutical companies are well positioned to benefit from the dramatic expansion of those covered by health insurance. GlobalData projects that Medicaid alone is projected to expand by about 19.5 million people, while 32 million formerly uninsured citizens become potential new customers — and customers that are less likely to use generics.

Of course, the industry’s success may hinge on the successful implementation of the new healthcare law. Increasing patient populations will help expand its revenues, but without them, expiring blockbuster patents and a lack of innovation – at least compared to the faster-growing biotech sector – could provide difficult hurdles to overcome. But at least for now, it seems likely that the ACA will proceed as planned over the coming couple years.

Investing in Pharma Equities with ETFs

The easiest way for investors to capitalize on the outperformance of the pharmaceutical industry is by leveraging its many exchange-traded funds (“ETFs”). According to data from ETFdb in Figure 1below, all four of the largest pharmaceutical ETFs outperformed the S&P 500 so far this year by margins of between 4 percent and 20 percent, depending on the ETF. In addition to their strong performance, the funds offer instant diversified exposure to the sector. 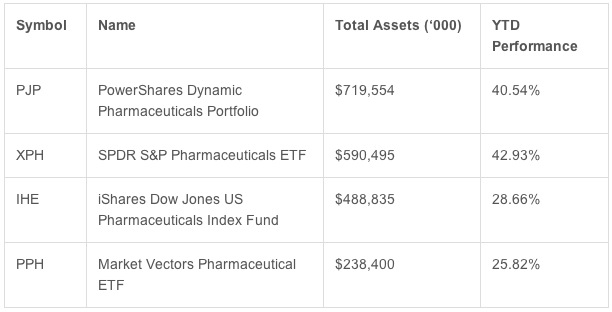 Of course, it’s important for investors to realize that most of these pharmaceutical ETFs primarily hold “big pharma” components. For example, the top holdings in the SPDR S&P Pharmaceuticals ETF include larger companies like Bristol-Myers Squibb Company (NYSE:BMY) and AbbVie Inv. (NYSE:ABBV) — the spin-off from Abbott Laboratories (NYSE:ABT). Greater growth and diversification could be seen in smaller players within this industry.

Big pharmaceutical companies, like Pfizer Inc. (NYSE:PFE) or Merck & Co. (NYSE:MRK), may account for the majority of the major pharmaceutical ETFs. But many investors are concerned that these large companies may be overvalued after their rally. For example, Pfizer trades with a price-earnings ratio of 20.2x, which is higher than the industry average of 16.8x, the S&P 500 average of 17x, and even Pfizer’s own 5-year average of 17.2x, which is perhaps the most relevant.

Investors may therefore want to take a look at some smaller equities in the space, including those that are valued on their future potential rather than current earnings. For example, Galectin Therapeutics (NASDAQ: GALT) has surged more than 400 percent so far this year, based on study results showing that tumor cells secrete galectin-3 (its target), which binds to, and blocks the action of, tumor-infiltrating T-lymphocytes, the body’s major immune defense.

While Galectin Therapeutics’s GM-CT-01 is in Phase I/II proof-of-concept clinical trials to treat melanoma, GR-MD-02 has the potential to treat non-alcoholic steatohepatitis (NASH, part of the fatty liver disease/fibrosis/cirrhosis progression) patients and even reverse scarring in the liver. The reduction in scarring for the liver – and other organs in preclinical trials – could revolutionize fibrosis research and produce a blockbuster drug for Galectin, if approved. Currently, GR-MD-02 is in Phase I clinical trials under a Fast Track designation from the FDA with the first patient dosed in July.

A slightly larger small-cap in the space is The Medicines Company (NASDAQ:MDCO), which has four drugs pending approval by the FDA in 2014. The Medicines Company also markets four drugs, including Argatroban, Recothrem, Recothrem and the biggest seller, Angiomax. Angiomax has generated more than $540 million in revenues last year, providing an element of stability, while several partnerships with industry leaders could further enhance its long-term growth.

The Medicines Company also trades with a price-earnings to growth ratio of just 0.7x, suggesting that it may be undervalued given its growth rates, despite a 35x trailing price-earnings ratio and 3.1 price-sales ratio that may indicate otherwise on the surface. These trends also appear set to continue with favorable inventory growth that regularly surpasses its revenue growth, which tends to suggest that future revenues will continue to surpass past revenues.

The pharmaceutical industry has been among the stock market’s top performers this year, nearly doubling the performance of the S&P 500 index. While most investors gain exposure via ETFs that invest in big pharma, those concerned about valuations may want to instead begin to diversify their portfolio into small-cap pharmaceutical companies, keeping in mind that they involve greater operational, financing, and liquidity risks.

Don’t Miss: Will GlaxoSmithKline Get Away in China?