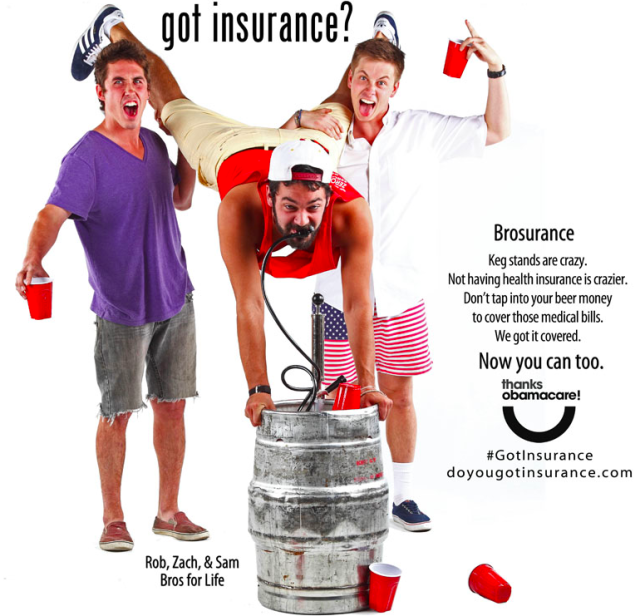 Most dictionary entries for “bro” merely note that it is the colloquial abbreviation of the term “brother,” which can be used to address a friend. However, Urban Dictionary takes the meaning a step further, defining a bro as an obnoxious partying male who is “often seen at college parties.” When bros “aren’t making [fools] of themselves they usually just stand around holding a red plastic cup waiting for something exciting to happen so they can scream something that demonstrates how much they enjoy partying.” It is harsh definition, but it certainly creates a mental picture of a young man in the prime of his life enjoying life’s simple pleasures. That is how those that developed the Affordable Care Act’s individual mandate see young men, at least so far as they are young and healthy.

The primary aim of Obamacare is to make health insurance affordable enough that most Americans can afford a policy. The exchanges were designed to allow consumers to comparison-shop for health insurance policies in online marketplaces where their collective bargaining power will theoretically foster competition and drive down prices. To further expand coverage, insurers have been prohibited from excluding those with pre-existing conditions, which makes the penalty for those who do not purchase insurance necessary.

But, herein lies the problem with the individual mandate. If a large enough number of young people that are relatively healthy, and therefore cheap to insure, choose the penalty, the system will be in jeopardy because that means those that have enrolled for insurance policies are largely older, sicker, and more likely to rack up higher medical bills.

The premiums of healthy, cheap-to-insure people cover the big bills for the relatively small number of sick people. So if the exchanges don’t enroll enough young, healthy people, insurers will have to raise everyone’s premiums. “In the worst case, this could create what actuaries call a ‘death spiral’: Rising premiums prompt people to drop out, causing premiums to increase even more,” as the New Republic’s Jonathan Cohn wrote in May.

In particular, men in their mid-twenties who earn a moderate income are needed to support the system. They will not qualify for subsidies, and unlike their female counterparts, will not be in need of birth control services or maternity care. Under Obamacare’s new requirements, insurers are not allowed to charge women more than men for the same policy, so insurers will theoretically have smaller profit margins on female policyholders. That is why these young men are essential to the proper functioning of the system and why the term “brosurance” has been born.

The Obama administration has calculated that of the 7 million people who are expected to enroll via the Affordable Care Act’s exchanges, around 2.7 million need to be young adults.

But because of the new regulations of the Affordable Care Act, insurers are no longer able to charge more based on health status or gender and policy premiums for plans purchased via the individual exchanges also reflect insurers’ estimates of the cost of offering the new benefits to new people, bros will also face the highest premiums.

That reality makes Obamacare insurance a tough sell, especially as “young adults are the age group least likely to have health insurance,” as the Department of Commerce’ Census Department found in data released earlier this year. In 2011, 27.2 percent of Americans between 18 and 34 lacked insurance coverage.

Of course, a significant number of young people will qualify for tax credits to subsidize the cost of insurance. A June analysis conducted by the consulting firm Avalere Health calculated that two-thirds of adults 30 or younger that are uninsured or enrolled in non-group coverage, and do not qualify for Medicaid, meaning the population most susceptible to so-called premium rate shock, have incomes that qualify them for the tax credits. Subsidies are given to those with incomes between 133 and 400 percent of the federal poverty level. But still, a significant contingent will not receive help, and those are the people that will experience rate increases.

While the “bro” demographic has be singled out as the symbolic victim of the health care reform by the Obamacare opposition, the proponents of the law argue that the healthy, financially-secure “bro” will some day become a sicker, 65-year-old man in need of the system.

A campaign launched by the Colorado Consumer Health Initiative (CCHI) and ProgressNow Colorado Education, the two organizations that created ThanksObamacare.org in 2011, highlights the importance of bros. The advertisements take a tongue-in-cheek approach to partying in hopes of educating that key demographic to the value of health insurance.  ”We were trying to connect with young adults, and we thought, ‘What are things that might connect with college-age folks?’” as Adam Fox, director of strategic engagement for CCHI and one of the individuals in the ad, told Mother Jones.

Don’t Miss: Insurance Executives Have Some Bad News for Obamacare.