Here’s What the U.S. Can Learn From the Baltic Recovery

While European Union members along the shores of the Mediterranean struggle with a seemingly endless slump, others who dip their toes in the Baltic are making a strong comeback. As the following chart shows, real gross domestic product growth in the Baltic 3 — Estonia, Latvia, and Lithuania — has recently run well above the euro area average. Meanwhile, the Med 4 — Greece, Italy, Spain and Portugal — continue their downward trajectories. Official forecasts call for their economies to bottom out in 2014, but predictions have been wrong before. 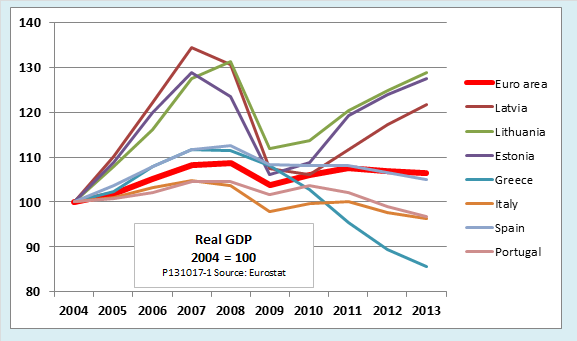 Some readers might object that this chart is misleading, since, to facilitate comparison, it shows output in all of the economies on a scale with 2004 equal to 100. Isn’t it simply the case that the Baltic countries are much poorer, and it is easier to grow from a low base? Besides, what is there to brag about when real GDP in the Baltic 3 hasn’t even gotten back to its pre-crisis peak?

Fair enough. Let’s change the scale, then, to show each country’s per capita GDP relative to the EU average, rather than relative to its own 2004 value. The next chart does that. It confirms that the Baltic 3 were the poorest members of the EU when they joined in 2004. Since that time, though, they have made great progress while the Med 4 have lost ground. It appears likely that Estonia and Lithuania will pass Greece and Portugal in per capita GDP as early as the end of this year, with Latvia not far behind. Note also that in terms of living standards, all three Baltic countries were already above their pre-crisis peaks by the end of last year. Not so bad, after all. 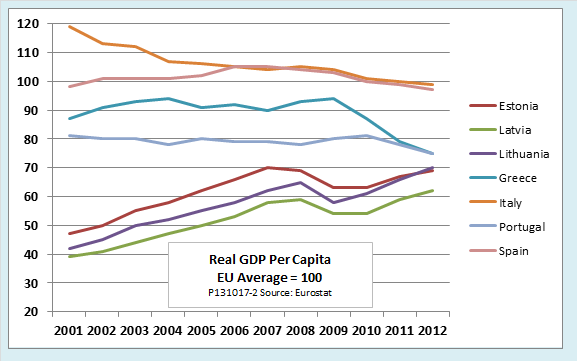 A third chart, showing unemployment rates, is even more impressive. Joblessness in the Baltic 3 has fallen for three years running. In all three countries, it is now below the EU average. Meanwhile, unemployment in Greece, Spain, Portugal, and Italy is headed nowhere but up — for the sixth year in a row. 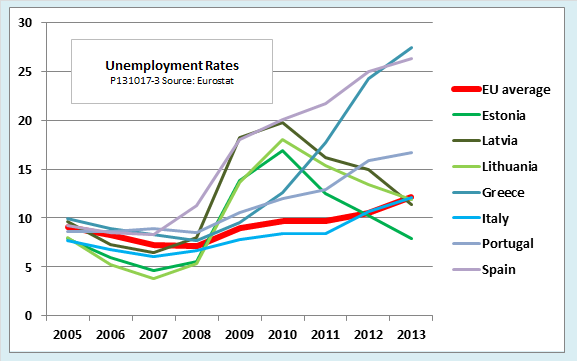 What is going on, then? Proponents of a policy of austerity — of budget cuts in the middle of a slump — sometimes point to the Baltic economies as a success story. I think that is highly misleading. Here is why.

Rational fiscal policy, as I have written many times before, should always be countercyclical, or at least cyclically neutral. The proper measure of the cyclical orientation of a country’s fiscal policy is the path over time of its primary structural budget balance – its surplus or deficit adjusted both for the state of the business cycle and for interest payments. As a country falls into recession, countercyclical policy requires discretionary tax cuts or spending increases that move the PSB toward deficit. As it recovers and nears full employment, the PSB should move back toward a small surplus. During a boom, when the economy is temporarily above its long-run potential level of GDP, the PSB should show a more substantial surplus.

Some countries, Chile for one, more modestly aim for a cyclically neutral policy. That requires the PSB to remain constant, usually in a slight surplus, throughout the business cycle. If it does so, the current budget balance will move into deficit during a recession and surplus during a boom, in response to automatic stabilizers like unemployment benefits and income taxes. A cyclically neutral policy may not be theoretically optimal, but it can be a good choice for a country that trusts policy rules more than the unrestrained discretion of its politicians.

What never makes sense is a policy that is deliberately procyclical. A procyclical policy is one that makes the business cycle more severe by moving the PSB toward deficit during a boom, with tax cuts and new spending, and then moves it toward surplus during a slump with tax increases and spending cuts.

That is the sense in which austerity is always a sign of policy failure. The need for austerity during a slump is simply the payback for recklessly running procyclical deficits during a preceding boom. Some people have described austerity as the hangover on the morning after the party, but I think it is more apt to think of it as a trip to the vomitorium after one too many pieces of cheesecake.

Unfortunately, fiscal policy was, to one degree or another, procyclical in each of the Baltic 3 and Med 4 countries during the years leading up to the financial crisis. Even Spain and Estonia, which managed a few years of annual budget surpluses at the height of their booms, were really running procyclical primary structural deficits when we strip away the effects of temporarily elevated tax revenues.

Once those countries fell into recession, they had no real choice but to undertake austerity. The reason is simple: Investors were no longer willing to buy their bonds at any sane rate of interest. Shut out of the market, austerity was their only real alternative.

If austerity is bad, why did it work in the Baltics?

But didn’t austerity “work” in the Baltics? Well, yes, it worked — in the same sense that throwing up your dinner is better than dying of food poisoning. After the purge, the Baltic 3 have been able to get out of bed and back on their feet faster than the Med 4 for three main reasons.

First, their prior bingeing was neither so severe nor so prolonged. Italy and Greece went into the crisis with gross government debt over 100 percent of GDP. Portugal’s debt ratio was 75 percent as of 2007. Spain’s was less than 50 percent, but that was only because its real estate bubble had helped it outgrow a debt ratio that had reached 75 percent in the late 1990s. By comparison, Estonia’s debt ratio going into the crisis was under 10 percent, and Latvia’s and Lithuania’s only a little higher.

Second, the Baltic states swallowed the bitter medicine of austerity all at once. Cut off from financial markets, they had little choice but to do so. As the above charts showed, the immediate results were very nasty. Latvia’s GDP fell by some 27 percentage points from 2007 to 2009, and that of Estonia and Lithuania by only a little less. The recessions in the Med 4 were more gradual but longer lasting in part because those countries spread their course of austerity out over a longer period.

Third, the economies of the Baltic 3 are structurally more flexible than those of Med 4. That is especially true for their labor markets, which are less burdened by rules that attempt to preserve individual jobs at the expense of employment as a whole. Regulations for starting new businesses and winding up old ones are also more flexible. When your economy is hit by a shock as severe as the global financial crisis, flexibility counts for a lot.

What can the United States learn from the Baltic experience?

We should, even more, be thankful that we have our own independent currency with a floating exchange rate — and what is more, one that enjoys special status as a global reserve currency. That means that even when we make fiscal mistakes, we are under a lot less pressure to undertake emergency austerity measures than are countries with fixed exchange rates, like the Baltic countries at the time of the financial crisis, or those like the Med 4, which share the euro.

A freely floating sovereign currency does not protect us from all the adverse consequences of bad fiscal policy, but at least it shields us from the threat of involuntary insolvency. If need be, the Fed can always print enough new money to meet our financial obligations in full and on time. That is, it can unless Congress were to prohibit it from doing so, and in that way throw the country into a voluntary default brought on by politics, not economics.

After our moment of thanksgiving, we should turn to the big lesson that we should draw from the varying experiences of the Baltic 3 and the Med 4: Procyclical fiscal policy is a bad idea. We shouldn’t have done it. We shouldn’t have recklessly cut taxes and plunged into unfunded wars in the years leading up to the global crisis. Right now, we shouldn’t be slowing the recovery with premature budget tightening before we are back to anything resembling normal.

What we should be doing is taking a cool, rational look at the way we conduct fiscal policy as a whole. It might well be that our political system is too chaotic and immature to conduct an orderly countercyclical fiscal policy of the kind the textbooks tell us is optimal. Maybe we should follow the Chilean model and institute a set of simple, cyclically neutral rules based on a philosophy of “first do no harm.” That would be better than the procyclical conservative idiocy of a constitutional amendment requiring an annually balanced budget.

Ed Dolan is Wall St. Cheat Sheet’s in-house economics professor. He is the author of an acclaimed series of textbooks, Introduction to Economics, and Ed Dolan’s Econ Blog.