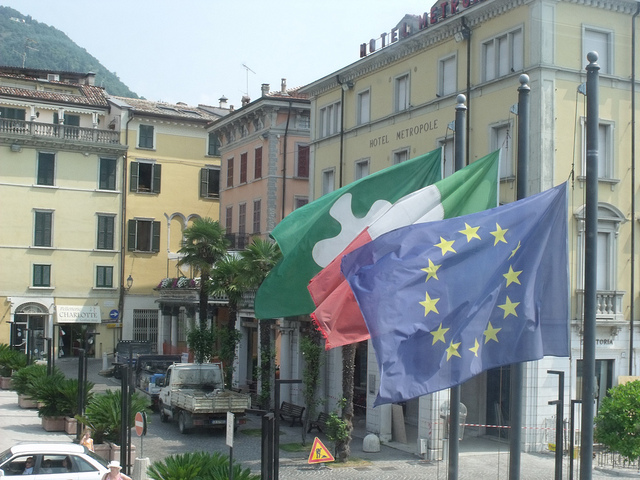 The trade surplus of eurozone countries has increased dramatically this year as opposed to 2012, The Economic Times reports. According to data released on Monday by Eurostat, the European Union’s official statistics bureau, the surplus in the trade of goods during September was 13.1 billion euros. This is up significantly both from August’s surplus of 6.9 billion euros and September 2012′s 8.6 billion euro surplus.

The news is generally seen as a good sign for eurozone economies. A trade surplus means that more goods are being exported than are being imported — this helps bring capital into a country as well as fosters economic activity involved in the production of exported goods. By far, the country with the biggest surplus was Germany, which has accumulated more than 127 billion euros this year. Other countries with notable surpluses were The Netherlands, Ireland, and Italy.

The eurozone’s trade deficit with China sank from 61.1 billion euros to 53 billion euros so far this year, compared to last year’s numbers. Decreasing reliance on Chinese goods — as well as bolstering exports to the country — is a good step toward giving domestically made products a chance to succeed in various European countries. The region’s balance with the United States, meanwhile, remained the same between 2012 and 2013.Despite the overall good news, several countries are still in the red when it comes to trade balances. France’s trade deficit so far this year amounts to slightly more than 50 billion euros. Concerns over lagging growth rates in France, coupled with the drag that the nation’s massive public sector puts on its economy, has led some to express doubts as to whether the region’s second-largest economy is really on its way to a recovery. Greece also maintained its trade deficit, a sign that conditions are struggling to improve in one of the area’s hardest-hit economies.

One interesting comparison in the data emerges when looking at the numbers for the eurozone and the larger, 28-country bloc that comprises the European Union. For the so-called EU28, the trade surplus was a mere 0.6 billion euros, though this is still up substantially from the 14.5 billion euro deficit that the region witnessed in 2012. This is indicative both of the fact that many of the peripheral countries are running deficits with countries in Asia and the Americas, as well as of the trend that many countries in the eurozone are exporting to countries in the EU28.

Fears persist over whether the German trade surplus is actually serving to hamper the region’s economic recovery. European officials have called for an extensive review of the German economy in order to assess the problem. Some believe that the German surplus makes it harder for other European countries to foster domestic industries, leading to high unemployment rates. However, the Germans have maintained that they are doing nothing wrong and that their economy is one of the healthiest in the region.

Don’t Miss: 10 Companies That Are the Boss of All That You Shop For.