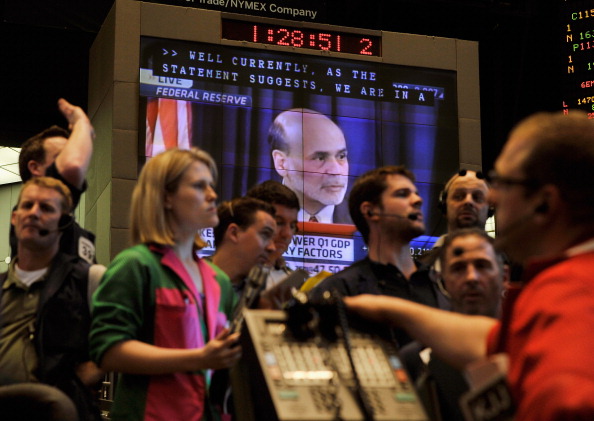 Big investment banks may have to experience some more pain in the second quarter before profits start ringing in. And, believe it or not, the cause of this pain is not necessarily unprecedented mounting legal costs for laundering money or for selling toxic mortgages in the lead up to the financial crisis. It’s actually the Federal Reserve that’s behind an industry-wide drop in trading revenues which has many employees packing their bags and has analysts raising alarms.

Banks are expected to take a beating thanks to a challenging trading environment in fixed income, currencies, equities, and commodities (FICC) in the first half of this year. Beginning in 2014, bond traders sitting in the dealing rooms of these big banks on the Wall Street expected three things: an economic recovery, a rise in long-term interest rates, and a decline in bond prices. Interest rates and bond prices move in opposite directions, so if the expectation is that the Fed will free the benchmark federal funds rate from zero bound on signs of economic recovery, then long term interest rates (indicated by the yields on ten-year government bonds) would rise and prices of these bonds would fall. Bond dealers make money when yields go up and prices fall.

However, the Fed decided to stay on the accommodation path a bit longer. Policymakers appear content to wait as long as it takes for the economy to start growing back on the right trajectory, for employment numbers to pick up, and for inflation to firm up to about 2 percent. Many banks appeared to underestimate the Fed’s patience and bonds prices have continued to rise. Bond traders who had exited their investments in bonds have had to pile up on the bonds again to make up for losing the opportunity and in the process the yields fell further.

Yields on the ten-year U.S treasury bonds fell from 3.03 percent in January to 2.46 percent in May, the lowest since January this year. According to Bloomberg, JPMorgan Chase (NYSE:JPM) reported in its quarterly regulatory filing on May 1 this year that fixed-income and equities trading revenue will drop about 20 percent from a year before due to “a continued challenging environment and lower client activity levels.”

“It’s an industry phenomenon, and other banks allow JPMorgan to grease the skids for them so there can be a gentle letdown process,” Charles Peabody, an analyst at Portales Partners LLC, told Bloomberg.

Goldman Sachs (NYSE:GS) is also looking to cut trading jobs due to plummeting trading revenues. “The environment for all of the firms is quite difficult right now,” Goldman Sachs President Gary Cohn said in April this year.

The secular drop in trading revenues expected among investment banks is due to a couple of reasons. One is low market volatility. For a bond or fixed income market to thrive, there must be two-way bets — that is, the market should have traders with opposite and equally strong convictions about interest rates and Fed’s monetary policy action. The higher the market volatility, the higher the churn or trading volume. But for most of the first half, the bond yields have moved unilaterally.

Another reason is capital rules. In the last year and a half, regulators have tightened the leash on banks by increasing capital requirements. In December, financial regulators adopted the Volcker Rule, a provision in the Dodd-Frank Act that curbs excessive risk-taking in the garb of hedging. Banks now keep aside more capital to absorb trading losses. Ironically, trading is all about taking risks and profits on currency, and fixed income trading comes from taking bets on how prices move on bonds or currencies from one second to another.

Banks are trying to make up for the loss of revenues by cutting jobs on the trading floors. In June, Morgan Stanley (NYSE:MS) announced job cuts from its currency and fixed income trading businesses. The same month, The Wall Street Journal reported that Deutsche Bank (NYSE:DB) cut its FICC staff by 17 percent between 2011 and 2013. Earlier in June Barclays (NYSE:BCS) announced its plan to cut 7,000 jobs in the next three years, and The Royal Bank of Scotland (NYSE:RBS) is also set to let go of traders.