Along with the downfall of Harvey Weinstein, the disgraced producer’s ex-wife Georgina Chapman’s company Marchesa continues to feel the burn. While the high-end dress brand has retained some customers, it was nowhere to be found when stars walked the red carpet at the Golden Globes in January 2018.

Chapman co-founded Marchesa in 2004 with partner and longtime friend Keren Craig. The brand is known for its lacy, intricate formal gowns and wedding dresses. Until sexual assault allegations surfaced against Weinstein in October 2017, Marchesa gowns were commonly worn by A-list stars at red carpet events.

Although Chapman announced she was separating from Weinstein immediately after allegations surfaced, her company has been suffering nevertheless. Here we’ll take a look at some of the ways Marchesa has been in trouble due to its ties with Harvey Weinstein. 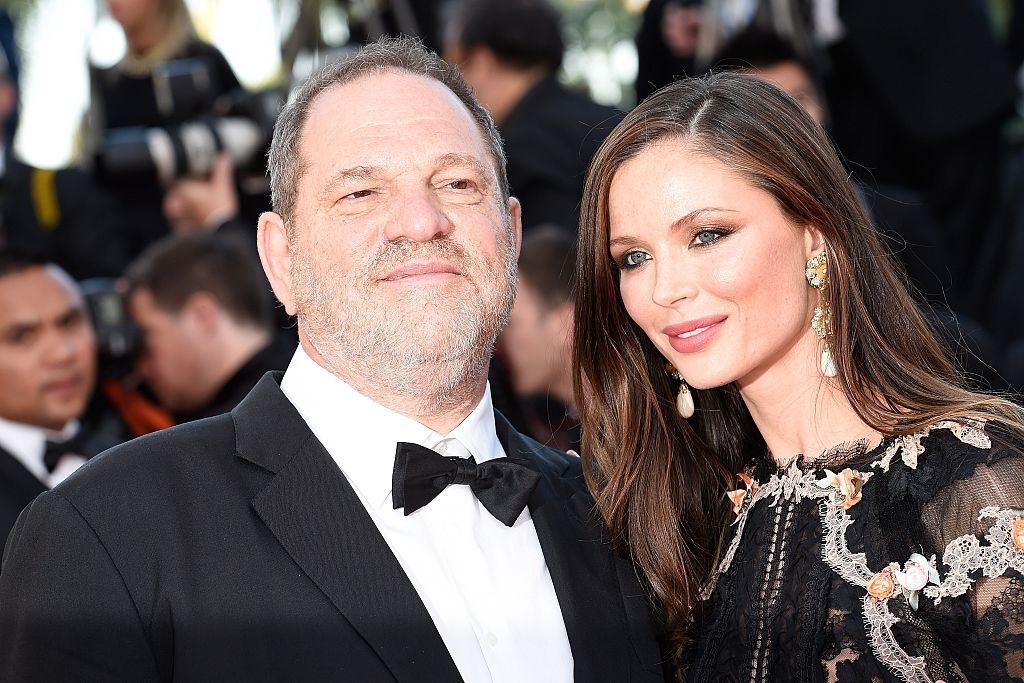 The scandal has not blown over. | Loic Venance/AFP/Getty Images

In the wake of the scandal, it seems Marchesa executives don’t feel ready yet for the public eye. The company announced it was canceling its presentation scheduled during New York Fashion Week on Feb. 14, 2018. Marchesa had a standing spot in the show for years.

The company announced the show will go on, but in an “updated format.” Some have speculated this likely means it will be a digital-only presentation. The New York Post quoted an anonymous source as saying, “Georgina couldn’t go through with it. She was too scared. They were gung-ho … but as they got closer, she choked.”

Next: Yanked from the red carpet

2. Marchesa is gone from the red carpet 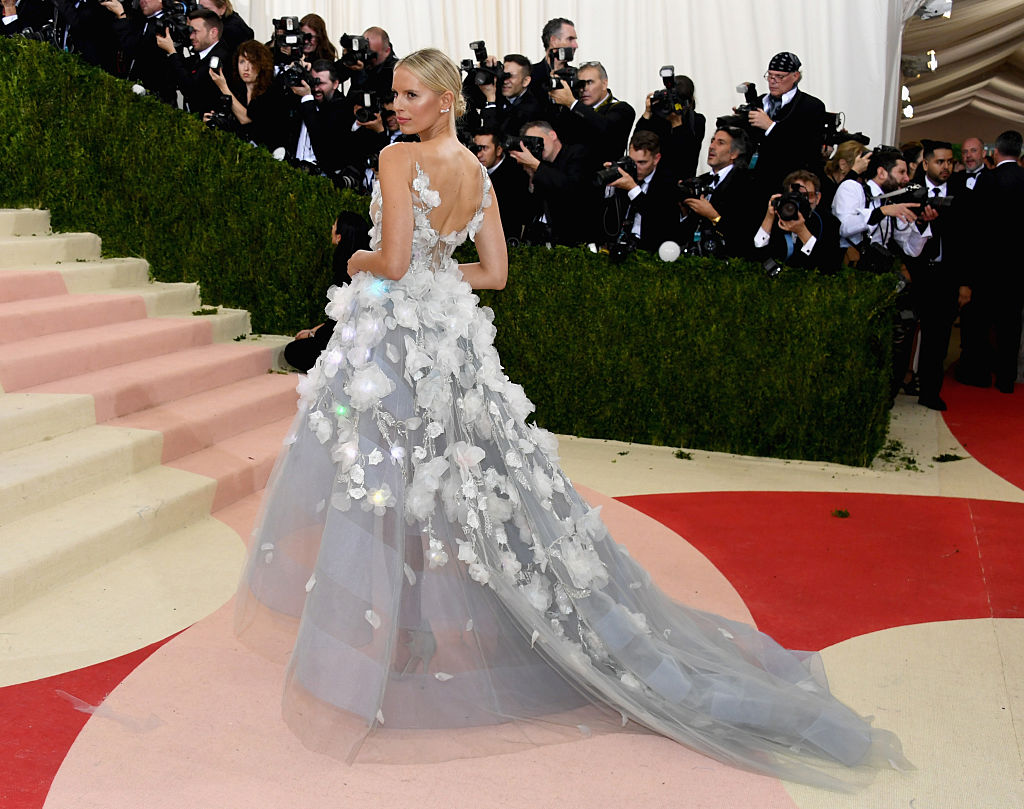 The actresses and models are probably going to shy away. | Larry Busacca/Getty Images

The days of A-list starlets appearing on the red carpet wearing Marchesa are likely over. The Marchesa brand benefitted greatly from these actresses showcasing its gowns and products. “Considering the nature of Harvey’s behavior and actions, I would expect that most of those actresses would distance themselves from wearing those gowns,” said Kim Vernon, president and CEO of consulting company Vernon Co. “I think that’s not good for the business.”

Stars who wore Marchesa in past red carpet events included Renee Zellweger, Cate Blanchett, Mischa Barton, Sienna Miller, Jennifer Lopez, and Penelope Cruz. “No star is ever going to want to wear the brand again,” said a New York fashion publicist, according the The Hollywood Reporter.

Next: A jewelry line got the ax. 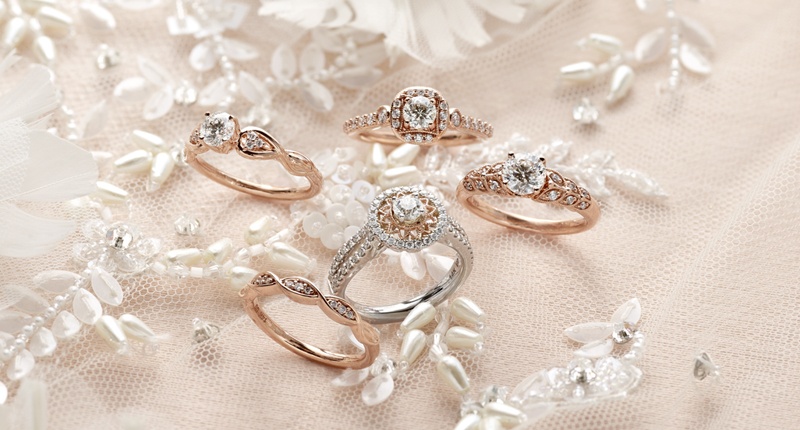 The jewelry company removed the collaboration from their site. | Helzberg Diamonds

Coincidentally, on the same day the New York Times broke the story about sexual harassment allegations against Weinstein, Helzberg Diamonds and Marchesa had announced a new deal. The jeweler was to start selling the “Marchesa Radiant Star” collection of engagement rings.

Soon after that, branding for the 18-piece collection was removed from the jeweler’s website, and a Helzberg representative told The Hollywood Reporter that “the company is not launching the Marchesa brand at this time.” The name of the same collection was changed to just “Radiant Star” on the company’s website.

Next: Are brides shying away? 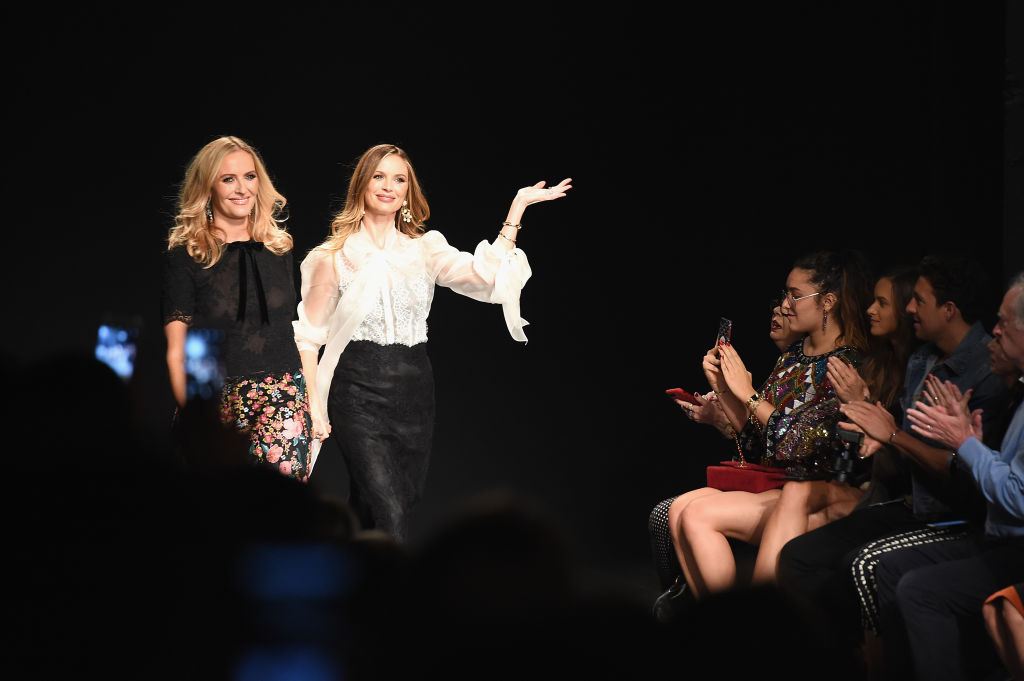 Shoppers are avoiding the brand. | Nicholas Hunt/Getty Images For NYFW: The Shows

There is the question as to whether Marchesa shoppers, including brides-to-be, are distancing themselves from the brand due to its Weinstein connection. “It’s going to be tough for some shoppers not to identify Marchesa with a scandal,” a bridal retailer said.

Twitter users have called for a boycott, using the hashtag #boycottMarchesa. One user’s tweet addressed Chapman directly: “What’s wrong with you, why are you supporting your pervert husband? I am now an EX-customer of Marchesa!”

Other bridal retailers maintain not all shoppers are even aware of the connection between Marchesa and Weinstein, which could help reduce the negative impact of the scandal on the brand.

Next: Stressed out employees

5. Employees on the run 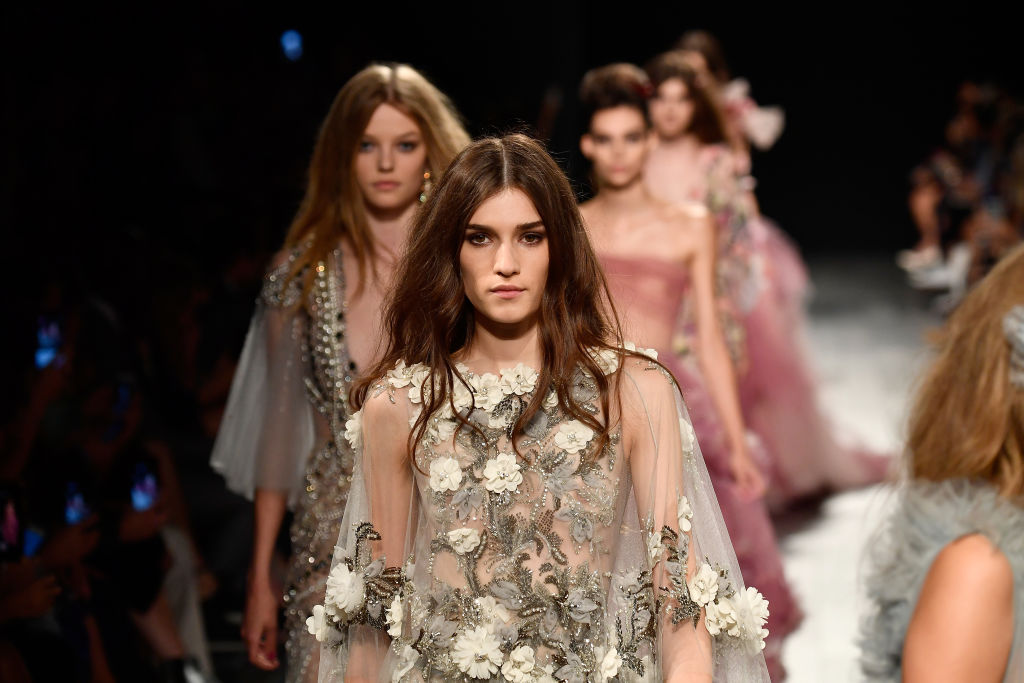 Employees are reportedly looking to leave the company. | Frazer Harrison/Getty Images For NYFW: The Shows

Marchesa employees were said to be looking to leave the company in the wake of the scandal. “Everyone is trying to leave,” according to a fashion publicist, who said Weinstein’s behavior created stress for people working at Marchesa.

“Harvey would call Marchesa employees and yell at them, scare the sh*t out of them,” the publicist was quoted as saying. “It’s a tough place [to work].”

Next: Another company affected big-time 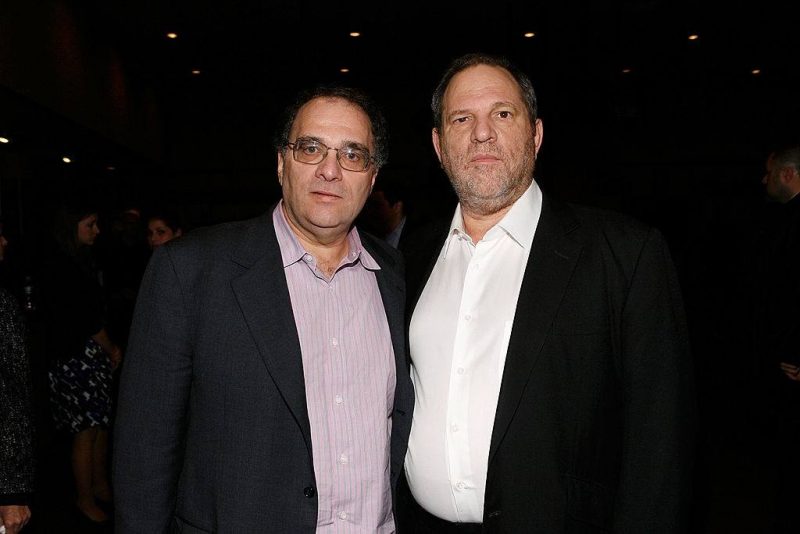 The company is swimming in debt. | Mark Von Holden/Getty Images for Dimension Films

The bad publicity affecting Marchesa seems to be just a fraction of what’s been going down at The Weinstein Company. Harvey Weinstein was fired in October 2017 after the allegations surfaced, although his brother Bob Weinstein currently remains there. However, the company is swimming in debt to the tune of $225 million and seeking to sell its assets.

A deal is currently in the works to acquire the company, according to Variety. Hollywood outsider Maria Contreras-Sweet placed a $500 million bid on the table. The plan is to rescue the company, rebrand it, and put women in charge, the news outlet reported.

Next: Some still support Marchesa. In spite of all the explosive allegations and bad publicity surrounding the Weinstein scandal, some stars and businesses continue to support Marchesa. Meghan McCain, co-host of ABC’s The View and daughter of Sen. John McCain, wore a Marchesa dress for her November 2017 wedding.

“The scandal erupted and everybody was like, ‘Are you going to keep the dress?’ And I was like, ‘Why should the two women designers be punished for a man’s disgusting behavior?’” McCain told People. “I just didn’t want to feel like the people who had worked there and make their livelihood should be punished as well.”

Another continuing supporter of Marchesa is the company Bergdorf Goodman, according to Linda Fargo, senior vice president. “Bergdorf Goodman and Marchesa have been longtime partners. We were the first store to pick up the brand when it launched in 2004. We have been avid supporters of Georgina and Keren’s work ever since and hope to continue supporting the brand in the future,” she said.

Next: What do you think? 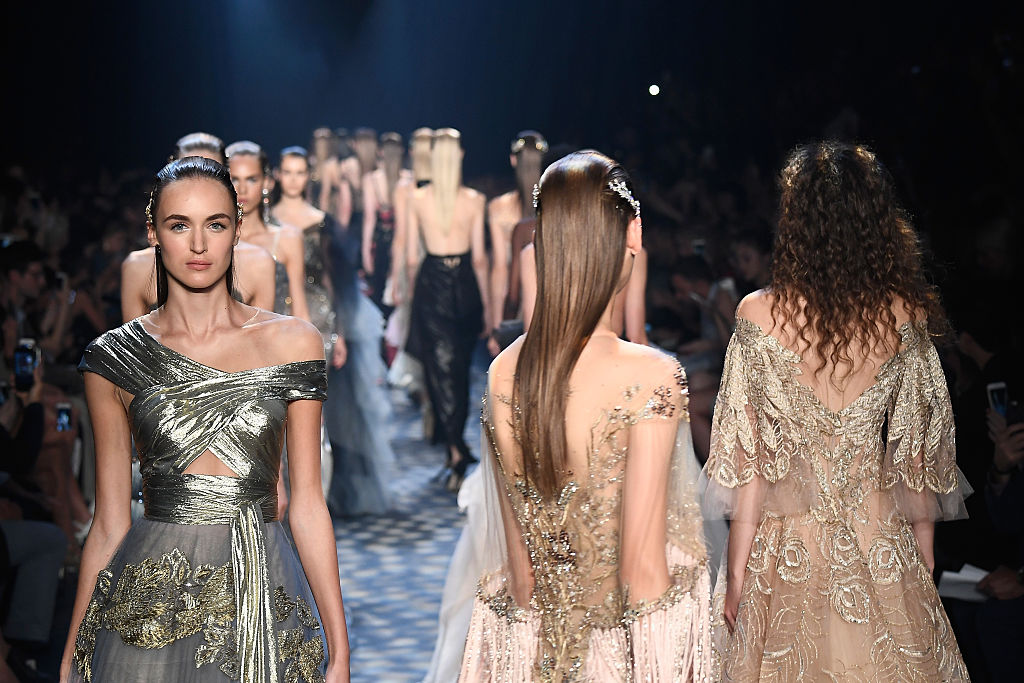 As we’ve seen, Meghan McCain and others feel it’s OK to wear the Marchesa brand and that the company’s employees shouldn’t have to suffer from the actions of Harvey Weinstein. After all, Weinstein clearly won’t be profiting personally by any success of Marchesa going forward.

Others disagree, saying the brand is tied too closely with the disgraced movie producer and therefore shouldn’t be patronized. One such critic is The Guardian’s Hadley Freeman. “Marchesa clothes are lovely, no question,” she writes. “But their success is inextricable from Weinstein and, in particular, Weinstein’s bullying tactics … And frankly, it’s a little hard not to feel, well, live by the Weinstein, die by the Weinstein.”