In many ways, the Department of Labor’s June Employment Situation Report was proof that the underlying trends in the U.S. labor market are strengthening. 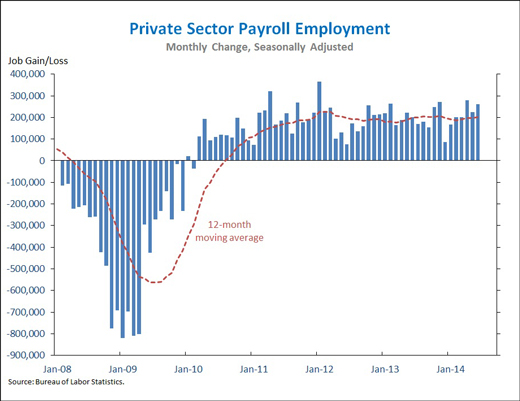 It is an indisputable fact that the 288,000 jobs U.S. employers added to payrolls last month is good news, and it is encouraging that the unemployment rate is well below the 7.9 percent rate with which the United States began 2013. The economy created far more jobs than the 215,000 that economists expected, and for the past three months job creation has averaged 276,000 positions per month.

More importantly, June represented the fifth consecutive month in which job creation surpassed 200,000 — a level considered to be an important benchmark of economic health. June’s employment gains pushed the total new of jobs created in 2014 to 2.495 million — the highest total for that period of the recovery Last month’s two percentage point decrease in the headline unemployment rate was also an indication of labor market improvement. In recent months, especially in April, the jobless rate has ticked down generally because large numbers of Americans gave up the job hunt and dropped out of the labor force, which is the basis for the unemployment calculation. However, the unemployment rate fell from 6.3 percent to 6.1 percent in June because 325,000 fewer people were unemployed and 407,000 more people had jobs, not because more job seekers had given up their search.

The last time the headline unemployment rate was so low was September 2008, when Lehman Brothers went bankrupt and signs of coming economic trouble were emerging. But the labor market is now much weaker than it was in September 2008. American job seekers may not be as disheartened at their employment prospects as they were earlier this year, but there is still a problem: “shadow unemployment.” In press conference following the June policy setting meeting of central bank’s Federal Open Market Committee, Federal Reserve Chair Janet Yellen explained that “a portion of the decline we’ve seen in the unemployment rate probably reflects a kind of shadow unemployment or discouragement.” For Federal Reserve economists, the key question about the economic recovery is whether the millions of American workers on the fringes of the labor force will be able to return. Last month, the labor force participation rate remained flat at 62.8 percent, the lowest level on record since the 1970s.

“My hope would be, and my expectation is, that as the economy recovers we will see some repair of that. That many of those individuals who are long-term unemployed and many of those who are out of the labor force would take jobs if the economy is stronger and would be drawn back in again,” said Yellen. “It is conceivable that there is some permanent damage there to them, to their own well-being, their families’ well-being, and the economy’s potential.”

The official gauge of unemployment is measured as share of the working-age population. But other calculations of joblessness tell a more nuanced story. Labor Department figures showed that 3.8 percent of the working-age population is unemployed, and by that measure unemployment is nearing pre-recession levels. However, another 3 percent of working-age Americans report they are working part-time because they cannot find full-time employment, and that figure is far higher than December 2007’s 1.8 percent. Even more concerning is the fact that part-time positions accounted for two-thirds of all the new jobs created in June. With this reality, economists must consider whether employers will give these laborers more work as the economy improves, or whether the U.S. economy is shifting permanently toward part-time employment, or whether those workers have been unable to secure full-time work because they do not have the necessary skills. A further 2.7 percent of working-age Americans say they are not actively looking for work but they would like a job, an increase from December 2007’s 2 percent. These individuals are not counted as unemployed because they are not looking for work.

While underemployment remains elevated, the number of workers jobless for 27 or more weeks has declined. The number of long-term unemployed Americans dropped by 293,000 in June and by 1.2 million over the past 12 months. Now, the long-term unemployed account for 32.8 percent of all jobless workers, which is the smallest percentage recorded since 2009. But 40 percent of all unemployed workers are millennials, according to an analysis conducted by Georgetown University’s Center on Education.

Friday’s job report sent the Dow Jones Industrial Average above 17,000 for first time in history. But, even though the strong job growth will likely ignite expectations for the Federal Reserve to increase interest rates earlier than previously stated, the employment data did not suggest wage inflation accelerated in June. Wages have only increased  a little more than 2 percent in the past 12 months, which matches the slow rate of salary growth recorded the past four years. But the fact that the unemployment level has dropped close to 6 percent months before the Federal Reserve expected does have economists wondering. What is known is that the central bank’s economic stimulus program of bond buying is scheduled to conclude in October.

Yet another question for economists to consider is what implications job creation in April, May, and June — which averaged 272,000 — has for second-quarter economic output. Last week, when the U.S. Department of Commerce released its final calculation of first-quarter gross domestic output, the revision showed that the U.S. economy performed worse than previously thought; economic output contracted at a 2.9 percent annual rate during the first three months of the year. While that significant decline is believed to be largely the result of the exceedingly cold winter, and the GDP contraction is not seen as the beginning of a new trend, it did serve as a reminder of the country’s deep economic scars. The 2.9-percent contraction is weak even for an economy where normal growth is below 3 percent. But economists expect GDP improved in the second-quarter, which ended Monday. Experts have estimated a growth rate of slightly more than 3 percent, and the June’s jobs report suggests that optimism is not unfounded. It also made clear that the winter hiring slowdown was only a slight aberration.

“In short, the labor market was already showing clear improvement, but it has accelerated further in recent months,” High Frequency Economics chief economist Jim O’Sullivan told The New York Times. “The pace in employment is pushing the unemployment rate down rapidly.” Other recent indicators of labor market health paint a similar picture.

Initial applications for unemployment benefits — which serve as a proxy for layoffs — highlight the fact that emerging unemployment is returning to acceptable levels. Or, in other words, fewer Americans are being laid off, even if shadow unemployment remains problematic. Despite rising modestly by 2,000 to a seasonally adjusted 315,000 in the week ended June 28, current jobless claims numbers both indicate “that the separations side of the labor market remained healthy in June” and “that labor markets have continued to show broad-based improvement,” as Barclays Capital economist Cooper Howes wrote in a research note obtained by The Wall Street Journal. At this level, claims are “at the level consistent with a healthy labor market turnover,” as BNP Paribas economist Yelena Shulyatyeva wrote in a client note. 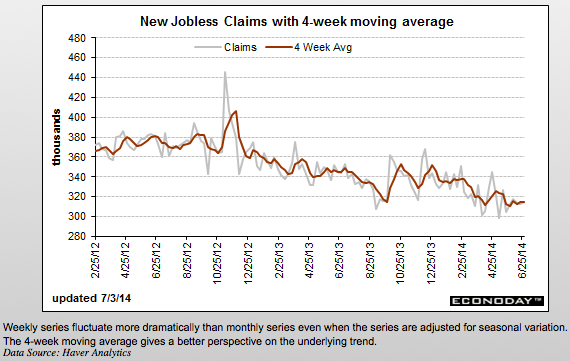 Of course, it is important to note that while jobless claims have generally been the encouraging portion of the labor market recovery narrative, charting a generally downward course for a large part of the past several years while job creation has struggled, applications for unemployment benefits have not remained at the key 300,000 level consistently since the recession began in 2007. But economists do say that any claim figure below 350,000 indicates moderate job creation.

Further evidence of volatility was provided by the Labor Department’s four-week moving average. Jobless claims provide the first look at the employment situation for any given month, but since the weekly figures can be volatile, economists use the four-week moving average to understand wider trends in employment, which are far more telling of labor market health than weekly readings. Alongside the increase in weekly claim numbers, the moving average rose 500 to 315,000. The number of workers continuing to draw unemployment benefits jumped as well, climbing 11,000 to a seasonally adjusted 2.58 million in the week ended June 21. Continuing claims — reported with a one-week lag — have fallen by approximately 400,000 over the past twelve months.

Challenger’s June job-cut report affirms the narrative told by falling jobless claims. After hitting a 15-month high in May, planned layoffs dropped 41 percent to 31, 434 last month. Now, at the halfway point of 2014, employers have announced 246,034 job cuts — a total 5 percent lower than the number of layoffs announced in the first six months of 2013. “The holidays were not kind to several retailers who answered with heavy layoffs in the first-quarter. We saw large-scale job-cut announcements from Macy’s, Best Buy, J.C. Penney, and Sears to start out the year,” explained the outplacement consultancy firm’s Chief Executive John Challenger. “The same arctic weather that sapped momentum out of the entire economy in the first-quarter undoubtedly contributed to retailers’ misfortune during the same stretch. The situation appears to have improved along with the weather, as layoffs by retailers declined by more than half in the second quarter.” 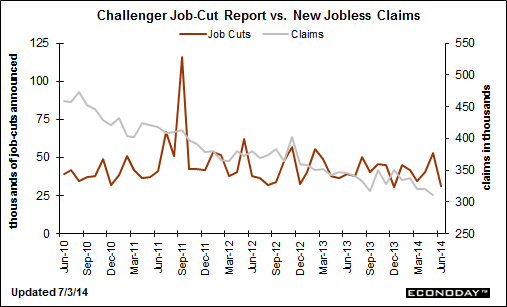 The Challenger Job-Cut Report could serve as a leading indicator for new jobless claims. However, not all layoff announcements result in near term job losses. For instance, companies often announce layoffs that will result in job losses but not immediately. Companies would simply not replace workers who quit voluntarily.