Haven’t you heard? Homes made from steel shipping containers are all the rage these days. Well, maybe they’re not quite that popular (yet), but they certainly are making headlines as an eco-friendly and affordable alternative to traditional housing — typically costing just half the price. They can be constructed quickly, and you can even buy one on Amazon.

Here we’ll share the basics of living in a shipping container house, including the cost (page 5). We’ll hear from a real-life couple who built their own shipping container home (page 4), and we’ll see where there’s an actual city made up solely of these recycled steel boxes (page 8). 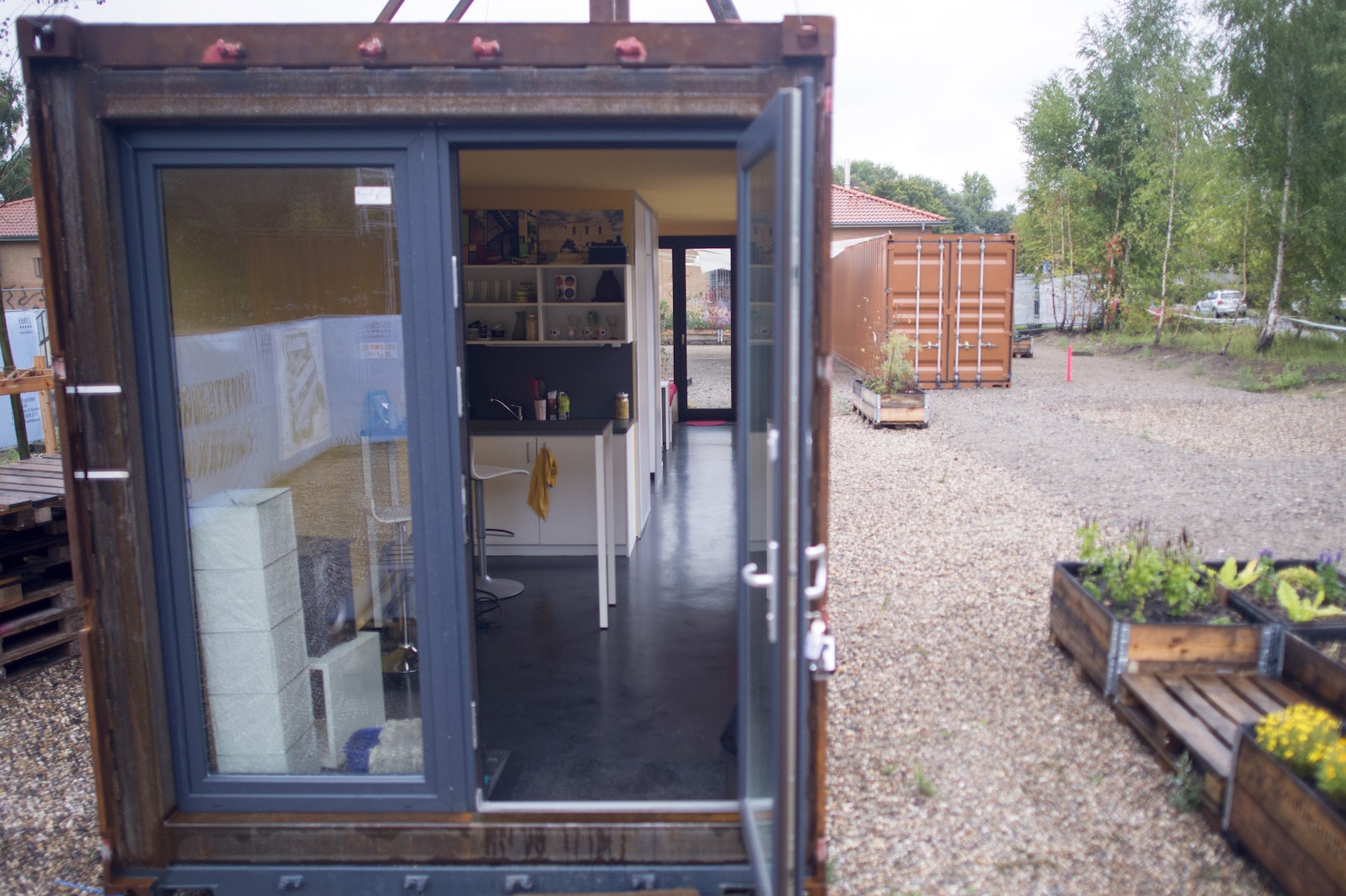 The homes are made of real shipping containers. | Johannes Eisele/AFP/Getty Images

Simply put, these homes are built with real shipping containers which are made of steel. They can be purchased brand new or used, and they can be positioned and connected in pretty much any shape and layout. The containers are 8-foot-by-20-foot in size and eight-and-a-half feet tall.

Next: Whose idea was this? 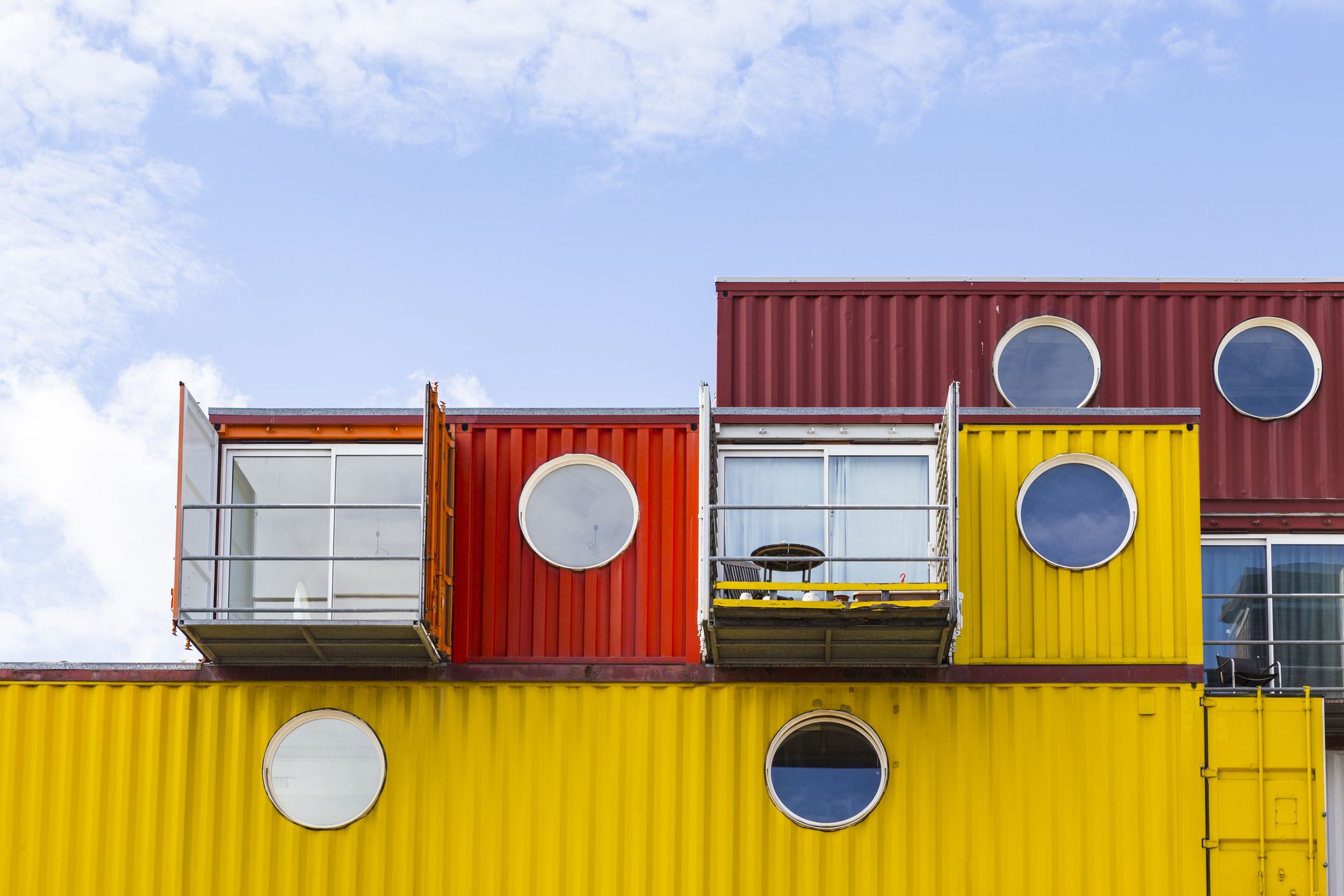 The idea was put into practice in 1987. | Kenneth Taylor/iStock/Getty Images

Modern shipping containers are the brainchild of Malcolm Purcell McLean, a trucker from North Carolina. He came up with the idea of shipping large cargo boxes in 1937. Two decades later, his idea was finally implemented.

Someone first decided to make one into a home in 1987. Philip Clark filed a patent for “converting one or more steel shipping containers into a habitable building.” Today there are thousands of these homes made from surplus containers that were sitting on docks around the world.

Next: How are they made into homes? The construction is obviously the most time consuming aspect. | Smithey Container Home via Instagram

A truck usually delivers the containers to the construction site. A crane or forklift then puts them in place, often side-by-side. Then the crew can remove all but the outermost panels in order to create an open interior space. They then cut openings into the outer walls for doors and windows.

The house sits on a traditional concrete block foundation reinforced with steel to secure the shipping containers. The crew welds down the containers and welds them together, then installs roofing and flooring.

Next: A Missouri couple built their container house themselves. Their home allows them to live mortgage free. | Smithey Container Home via Instagram

One of the things St. Charles, Missouri couple Zach and Brie Smithey love about their 3,100-foot container house is it allows them to live mortgage free. “We chose a container house because it gave us the most bang for our buck,” Brie said. “It allowed us to use recycled materials, which was important to us.”

They built their home with eight 40-foot containers, each with nine-foot-high ceilings, each costing around $2,000 delivered. Once the containers arrived, the couple stacked them using a crane. They did all the construction themselves, working 12-hour days without weekends off, for a year and 14 days.

Next: What’s the average price? The couple managed to create a designer home for a fraction of the price. | Smithey Container Home via Instagram

The cost of one of these homes is around half the price per square foot of a conventional home. A poll found the majority of people said they would live in a shipping container home because of the affordability. Some people have even been able to construct such a home on their own for less than $100,000.

Next: How they’re good for the environment 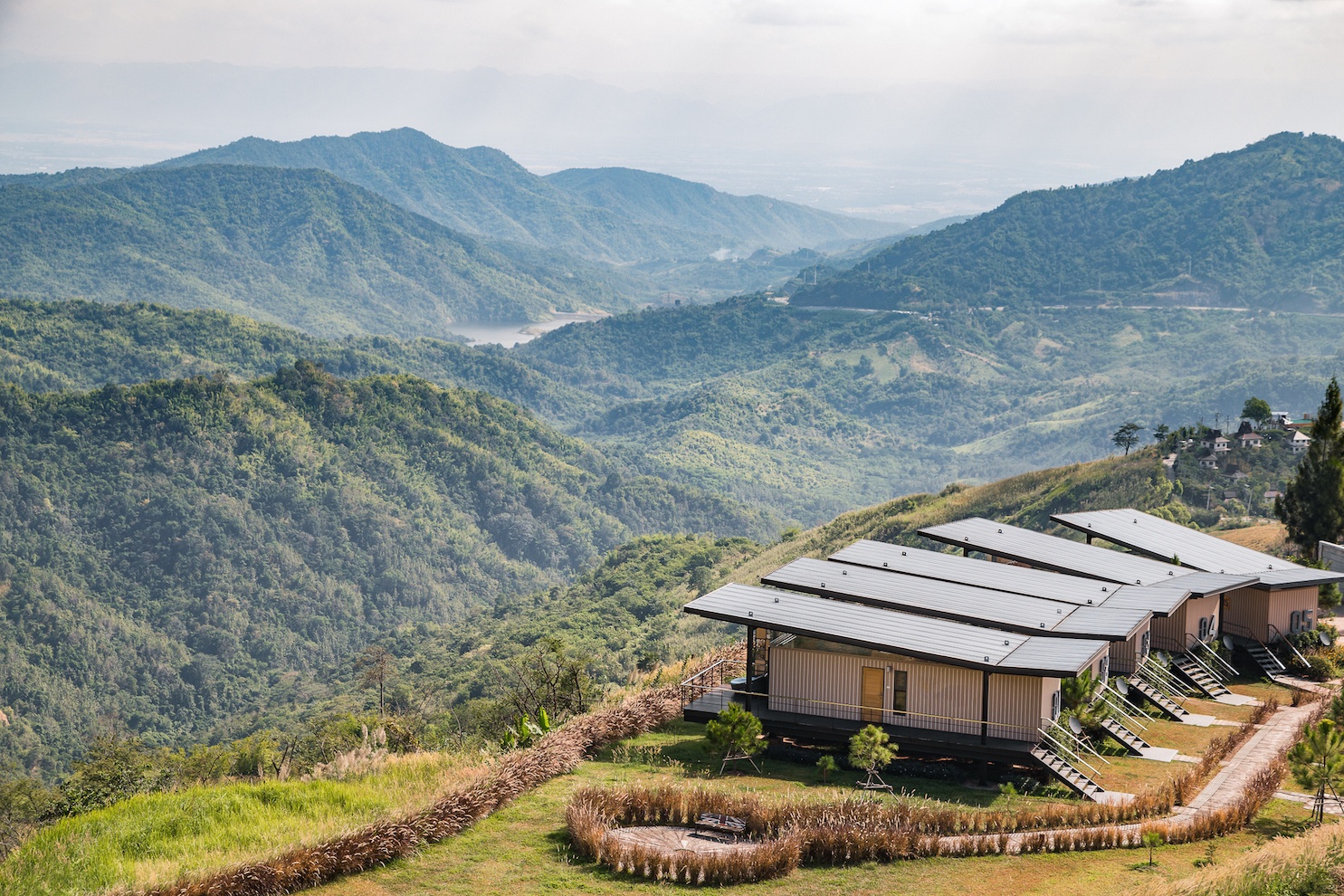 They use less energy. | jack-sooksan/iStock/Getty Images

Shipping container homes are gaining popularity as eco-friendly practices become more mainstream. And owners can recycle the materials in the future by taking them elsewhere. For climate control, some owners install insulated panels and radiators. During construction, some owners spray insulating coating on both sides of the walls to help save on heating and cooling.

“We had an open house one day when it was 85 or 90 degrees out and the air was at least 10 to 20 degrees cooler inside,” said Shannon Locklair, project superintendent for a shipping container house. “This was before we had even installed windows.”

Next: Are there any downsides to owning these homes? 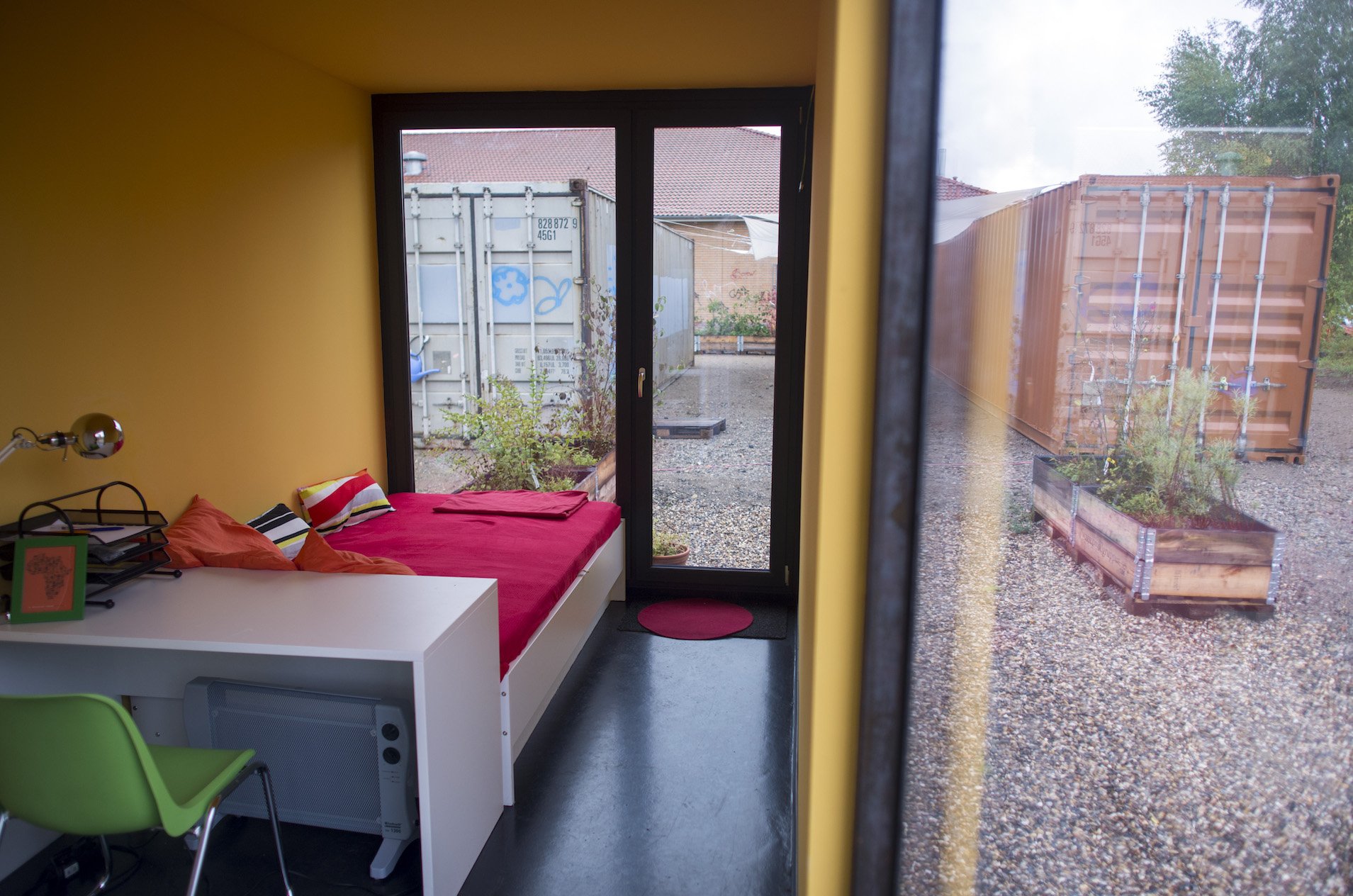 Make sure you’re able to get a permit. | Johannes Eisele/AFP/Getty Images

If you’re seriously considering building one of these unconventional homes, find out early on if you can obtain a permit to build one in your city or town. As with any construction, you’ll need to make sure your new home meets the various local codes. This is one of the hardest parts of building a shipping container home, reports say.

Another possible pitfall is recycled containers may have been sprayed with harmful chemicals either in the form of pesticides or paint. You can contact the original manufacturer to find out if this is the case. You can then remove or treat the toxic materials.

Next: See an entire city made from shipping containers. 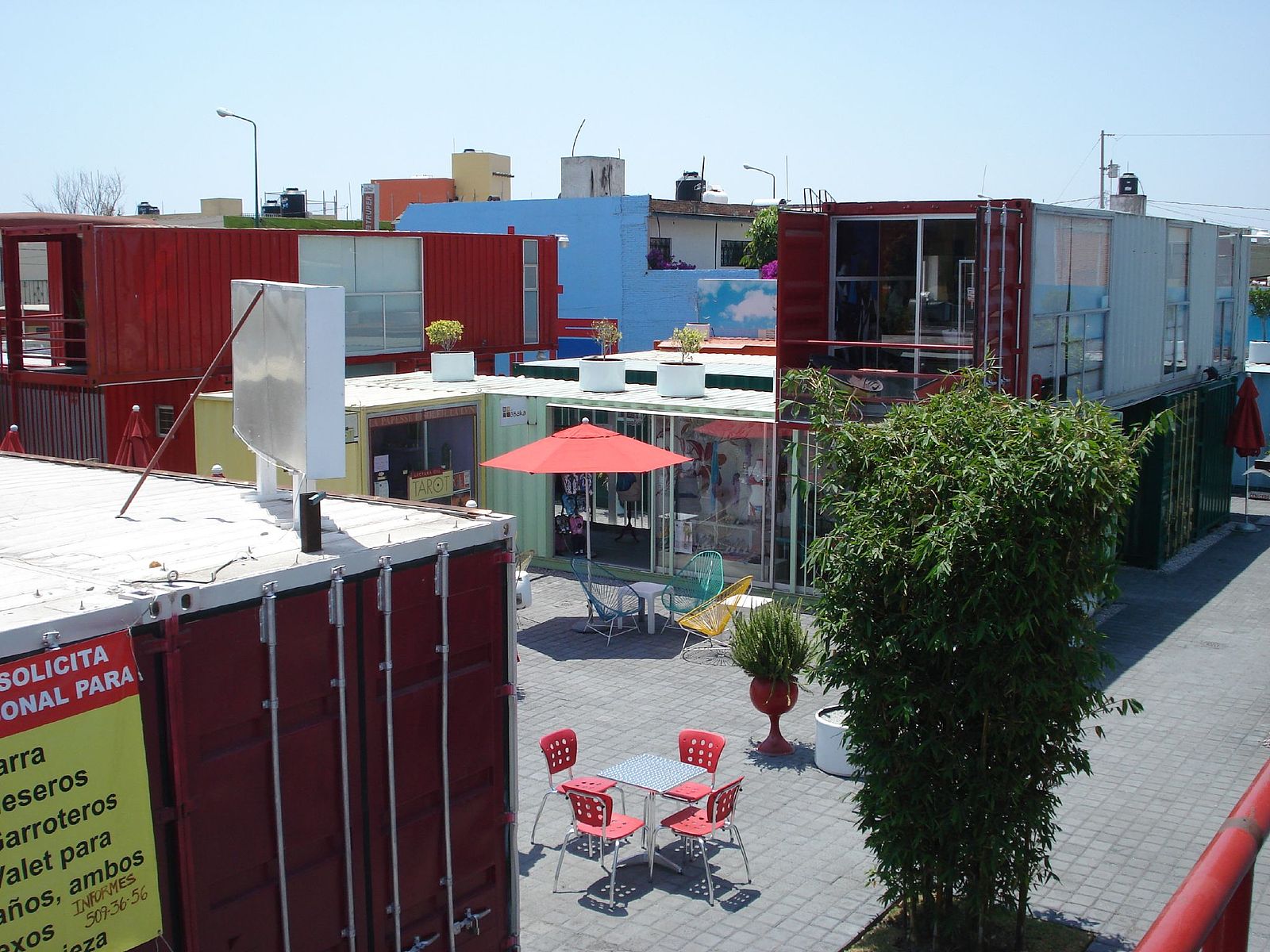 Entire cities have been made of container homes in places like London and Mexico. Just outside of Mexico City, a colorfully-painted city of these steel structures sprang up. In addition to living spaces, the community also houses restaurants, gallery space, bars, and stores.

Appropriately named Container City, the tourist attraction features around 50 recycled shipping containers in all. It even offers an open public area with ping pong tables and a music lounge. Wi-Fi is provided in hallways between the containers.