Home Sales Reach Milestone, But First-Time Buyers Get Left Behind 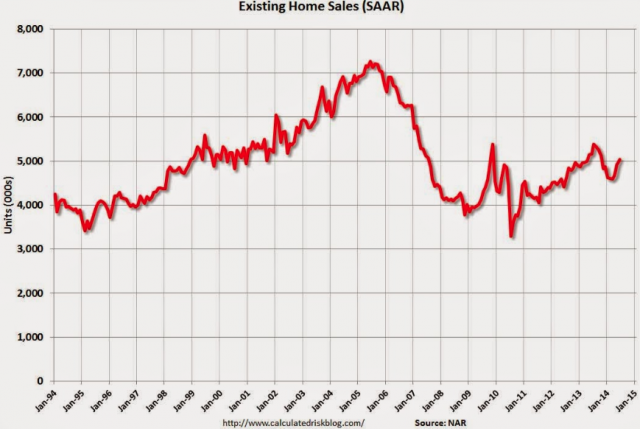 After a rough start to the year, existing-home sales have now climbed higher for three consecutive months. Sales last month beat expectations and reached their fastest pace since last year. However, concerns remain about the sluggish labor market.

The National Association of Realtors announced Tuesday that total existing-home sales — completed transactions of single-family homes, town homes, condos, and co-ops — increased 2.6 percent to a seasonally adjusted annual rate of 5.04 million units in June compared to an upwardly revised 4.91 million units in May. In fact, this is the first time sales reached an annual pace of 5 million units since October 2013.

The results were better than expected. Economists expected sales of a 4.97 million unit pace in June. Earlier this year, sales missed estimates for seven consecutive months. Although sales were impressive last month, they remain 2.3 percent below the 5.16 million unit level a year earlier. This is the eighth consecutive month that sales were below year-ago levels.

“Inventories are at their highest level in over a year and price gains have slowed to much more welcoming levels in many parts of the country,” said Lawrence Yun, NAR’s chief economist, in a press release. “This bodes well for rising home sales in the upcoming months as consumers are provided with more choices. On the contrary, new home construction needs to rise by at least 50 percent for a complete return to a balanced market because supply shortages — particularly in the West – are still putting upward pressure on prices.”

Housing affordability issues are still being witnessed in the market. First-time buyers accounted for just 28 percent of purchases last month, up only 1 percent from 27 percent in May. A normal reading would be closer to 40 percent. The median existing-home price for all housing types in June increased 4.3 percent year over year to $223,300. Home prices have posted 28 consecutive months of year-over-year gains and will likely remain a challenge for first-time buyers.

Despite the falling unemployment rate, weak wage growth is still holding back the housing market. “Hiring has been a bright spot in the economy this year, adding an average of 230,000 jobs each month,” said Yun. “However, the lack of wage increases is leaving a large pool of potential homebuyers on the sidelines who otherwise would be taking advantage of low interest rates. Income growth below price appreciation will hurt affordability.”