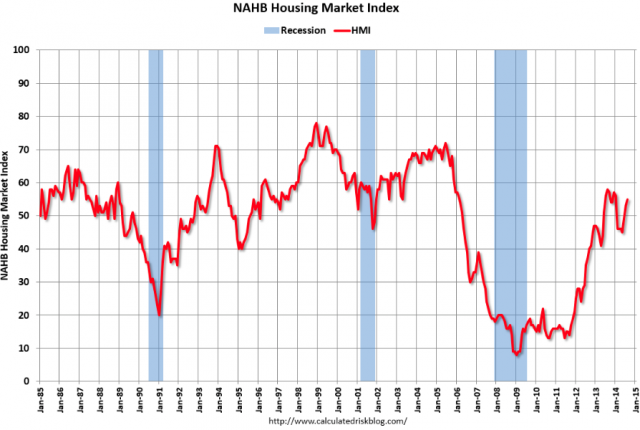 Despite an early summer slowdown in housing starts, homebuilder sentiment in the United States climbed higher for the third consecutive month and reached its highest level since January.

The National Association of HomeBuilders/Wells Fargo’s index of builder confidence increased 2 points to reach 55 this month, compared to 53 in July. After a few rough months earlier this year, builder confidence is at its highest level in seven months and has held above 50 for two consecutive months.

The results were better than expected. On average, economists expected the index to hold relatively steady. Any reading above 50 indicates that builders in general hold a positive view on sales conditions. In the five years before the Great Recession, the index averaged 54 and hit an all-time low of 8 in early 2009. Prior to July’s reading, the index had been below 50 for five consecutive months.

“As the employment picture brightens, builders are seeing a noticeable increase in the number of serious buyers entering the market,” said NAHB Chairman Kevin Kelly, a homebuilder and developer from Wilmington, Delaware. “However, builders still face a number of challenges, including tight credit conditions for borrowers and shortages of finished lots and labor.”

The NAHB/Wells Fargo Housing Market Index (HMI) gauges builder perceptions in three areas of the real estate market, which all climbed higher in August for the third consecutive month. The reading for current sales conditions and expectations for the next months both increased 2 points to 58 and 66. The component gauging buyer traffic rose 3 points to 42.

Adding to the positive momentum, the HMI three-month moving average improved in all four major regions of the country. The Midwest surged 7 points to reach 55, while the West posted a 4-point gain to 56. The Northeast and and South increased 2 points and 1 point, respectively.

Sentiment levels were also strong considering the state of housing starts. According to the U.S. Department of Commerce, builders broke ground on houses at a seasonally adjusted annual rate of 893,000 units in June, down 9.3 percent from the downwardly revised May estimate of 985,000 units and 16 percent below the April level of 1.063 million units. In fact, June was the worst month for housing starts since September 2013.