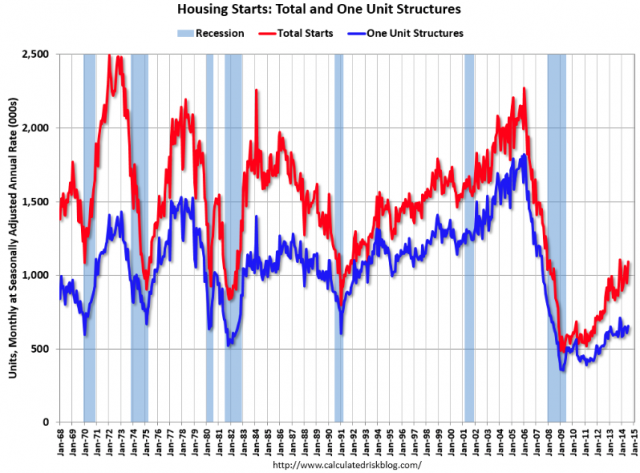 After initially plunging to the lowest level of the year in June, housing starts rebounded sharply in July to help keep housing recovery hopes alive.

According to the U.S. Department of Commerce, builders broke ground on houses at a seasonally adjusted annual rate of 1.093 million units last month, up 15.7 percent from the upwardly revised June estimate of 945,000 units, and 21.7 percent above the July 2013 level of 898,000 units. In fact, it was the fastest pace for housing starts since November 2013.

The results for July easily beat expectations, which has been a rare occurrence over the past year. On average, economists expected housing starts to come in around a 969,000-unit pace last month. In comparison, June’s initial estimate was the biggest miss of expectations since early 2007. Groundbreaking for single-family homes, the largest part of the market, jumped 8.3 percent, while multifamily starts surged 33 percent.

Almost every region of the country experienced an improvement in housing starts. Housing starts in the Northeast and South surged 44 percent and 29 percent, respectively. Meanwhile, the West posted an 18.6 percent gain. The Midwest was the only region to contract, slipping 24.8 percent in July.

New building permits — an indication of future demand — increased 8.1 percent from June to a seasonally adjusted annual rate of 1.052 million units in July. Permits for single-family homes rose nearly 1 percent month-over-month. However, multifamily permits surged 23.6 percent, which could be a sign that homebuilders expect strong rental demand amid a sluggish economy.

Currently, the rate of housing starts is modestly ahead of last year’s pace. Construction began on 924,900 homes in 2013, a significant increase from 780,000 units in the prior year, but still below the historic average of 1.5 million new homes per year since 1959. Housing starts peaked at 2.27 million units in early 2006, while the pace of home construction reached its low point in 2009, at below 500,000 units.