How Changing Your Commute Can Improve Your Health and Happiness

Looking to make your work day suck just a little less? The key may be in tweaking the way you actually get to your place of employment — at least, that’s the conclusion reached in a recent article from Vox. According to the piece, the mode of transportation people take to and from work actually plays a large part in people’s overall happiness and health.

Anyone who has had to spend countless hours in traffic may not find that very surprising.

The article points at two studies, one from Canada that was further explored by CityLab, and another from Britain that found that people who make their commute via public transportation, walking, or biking have significantly lower rates of obesity. Essentially, the two studies reach the conclusion that people who spend their commutes in their personal vehicles, fighting traffic and spending significant amounts of money on fuel and insurance costs, end up getting the short end of the stick in terms of both overall health, as well as in how they feel.

Hell, we’ve all made it to work at one point or another ready to punch a hole in the wall, haven’t we?

The important thing to take into consideration regarding these two studies is that they were not done in the United States, which does change things a little bit. For the Canadian study, researchers polled people commuting to and from a college located in Montreal, measuring their satisfaction level with their chosen method of transport. The British study, on the other hand, dug into data regarding commuting methods and compared that to body makeups to look for patterns. Had both of these studies been done in the United States, the data would likely have come back different, and it would really depend an awful lot on what cities the researchers conducted their experiments in.

For example, residents commuting in a sprawling Midwestern city like Chicago would likely have differing commuting patterns than the population of, say, New York City or San Francisco, both of which are more compact and centralized. 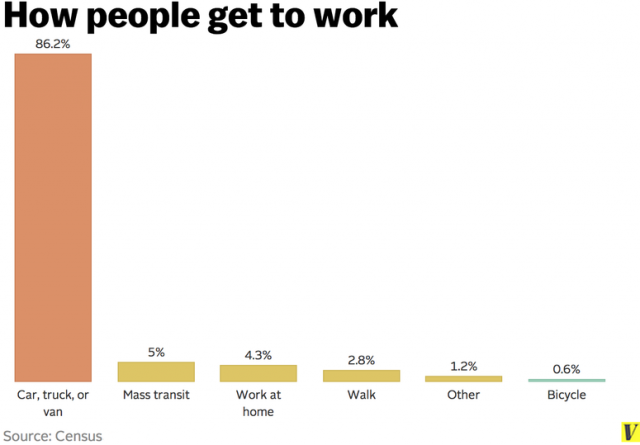 Those differences between specific metro areas, particularly in the United States, really lead us to probably the most important detail that can be taken from these studies: A lot of people don’t have much sway in their commute choices. When talking about America specifically, each city presents its own set of challenges, with wildly different climates, topographical features, and political alignments all playing a part in transportation issues.

For example, a more conservative city may not be willing to vote for increased spending on public transportation or the construction of bicycle lanes in major urban arteries. Some cities have ingrained bicycles into overall city planning, and actively attempt to get people to commute via bicycle. The idea is that the more cars they can get off the road, the more congestion and pollution will be reduced.

But car culture is huge in America, and it’s hard to get people to give up the comfort and convenience of their personal vehicle. That’s completely understandable, although it may not be sustainable in the long term.

The glaring issue is that many people, again, don’t really have a choice. If you live in a city with poor public transit options, taking the bus or train simply might not be an option. Also, many people tend to live in the suburbs, away from the urban core. This might be too far to walk or bike, and with the lackluster public transport options that most U.S. cities have, owning and using a personal vehicle is really the only choice.

That may be another factor that adds to the frustration of commuting, though: A lack of choice. Our cities are designed to be traversed by car. This was not done by accident, as decades ago there was a lot of vested interest in making sure Americans were buying cars and the fuel to run them. But as time has progressed, the investment in infrastructure to handle the growing amount of commuters and their vehicles has not come about.

If these studies are any indication, there is a lot to gain from ditching the car and instead taking the bus or hoofing it to work. Overall, we’d most likely see a decrease in stress, save a lot of money, and generally feel better. But there are some big barriers standing in the way, and with the current state of American mindsets toward transportation and personal vehicles, don’t expect many people to act on the evidence being presented.