How Coffee Companies Will Need to Confront Warmer Climates

Many people can tell the time of day based on how many cups of coffee they’ve had. The liquid caffeine fuels 59% of Americans every day, with 71% drinking a cup of coffee at least once per week, according to the National Coffee Association. The International Coffee Organization estimates the global coffee industry to be worth more than $170 billion, and reports that 141.9 million bags of coffee (each 60 kilograms, or about 132 pounds) were produced in the past year. But despite the booming industry and a commodity that many people can’t live without, business will soon need to adapt their models to account for climate changes in the areas where the most coffee is produced. Otherwise, the industry could face sharp price increases as the supply decreases.

Because of coffee’s popularity in the United States and around the world, it’s easy to get attention by saying that prices on the product are going to skyrocket. Any time there’s a hint that a price bump is a possibility, the caffeine dependents of the world get a little more nervous. The central problem with this is that coffee can only be grown in certain climates and temperatures, which is why countries like Brazil, Colombia, Ethiopia, and Indonesia contain a vast majority of the crop areas.

As with other businesses that are changing their business practices based on environmental concerns, companies involved in the coffee industry are attuned to weather patterns in the areas where their crops are grown. In this case, warmer temperatures in key growing areas are showing that farmers growing Arabica coffee — the high-quality strain of coffee bean that accounts for 70% of the world’s coffee supply — will either need to change processes or change locations completely to contend with a higher heat index.

The changing business model for coffee growers is just one example of companies that will face shifting supply chains in one way or another because of climate change. The cause of climate change isn’t relevant in this part of the discussion because regardless of the cause, the consequences are very real. Brazil has enduring a drought spanning more than a year, stunting coffee production and prompting coffee companies like Starbucks and Dunkin’ Donuts to announce some price increases in their coffee menus as a result.

Though droughts can come and go, a study by the International Center for Tropical Agriculture published in April 2015 shows that coffee crops in numerous countries around the world will have to move their fields hundreds of meters higher above sea level to combat rising temperatures. The study’s authors used 21 models for climate change predictions through the 2050s and took into account the growing conditions necessary for a bountiful Arabica bean crop. 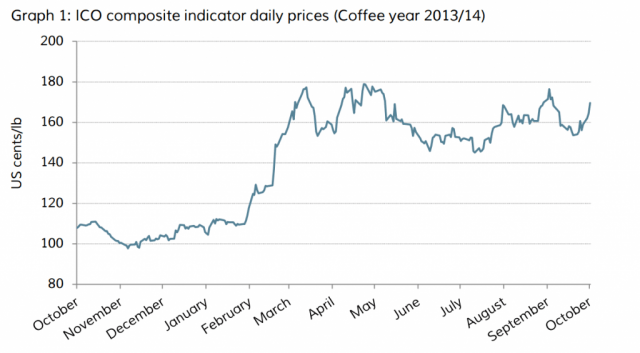 Countries like Peru, Colombia, and Ecuador will be able to compensate for lost growing areas by moving their crops further into the Andes Mountains, the report concluded. But for some countries, especially Brazil, the risk for losing all potential growing areas is severe. “Overall, the Andes countries would lose 16–20% of the current area suitable for Arabica coffee while Brazil would lose 25%,” the study’s authors report. “We emphasize that these figures are for where Arabica coffee grows now. Although losses in the Andes will be less than in Brazil, the difference is that there will be alternatives in the Andes that Brazil will not have.”

The report further explains why Brazil is in deep trouble by stating the following: “Brazil has no high elevations and grows large areas of Arabica coffee at low elevations, which are predicted to suffer substantial losses in suitability for coffee. Only a few farms at higher elevations could expect improved suitability.” For the same reason, the report predicts that areas in Zimbabwe, Nicaragua, and El Salvador will lose many of their growing areas. Though each region will see its own levels of variability in coffee production, the rising temperatures at lower sea levels means that adjustments will need to start happening sooner rather than later. Overall, the study predicts that the affect of climate change on the coffee industry will be negative, with some areas bearing the brunt of that more than others.

The struggle is that companies who provide coffee to consumers will need to figure out their coffee sources well in advance, as demand for the product isn’t likely to decrease any time soon. Though global coffee production was down by 3.3% this past year compared to the year before (with a 2.8% decrease in Arabica coffees specifically), global coffee consumption increased this year by 2.3%. That’s great for companies, but not so much for consumers who now have to compete with growing numbers of people for a product that’s becoming more limited because of rising temperatures.

Though some companies have already started passing costs on to consumers (the Starbucks and Dunkin’ Donuts announcements last year were accompanied by increases of a few cents on select drinks), others are cautiously waiting to see what happens. In a June 2014 quarterly report, Keurig Green Mountain, the k-cup giant, listed climate change as a risk factor to the company. The statement reads:

“Decreased agricultural productivity in certain regions of the world as a result of changing weather patterns may limit availability or increase the cost of key agricultural commodities, such as coffee and tea, which are important sources of ingredients for our products, and could impact the food security of communities around the world.  Increased frequency or duration of extreme weather conditions could also impair production capabilities, disrupt our supply chain or impact demand for our products.  As a result, the effects of climate change could have a long-term adverse impact on our business and results of operations.”

No matter what, companies are bound to be in flux if temperatures do rise in the way they’re predicted to. At the very least, farmers will move their crops to higher ground. At worst, the crops could be moved to other countries that can sustain their growth, changing the supply chain significantly. In either situation, there’s likely to be some expected upheaval as the entire industry adjusts to the change. Though the report does believe this will have a negative affect, it also doesn’t predict that coffee will stop being grown. So don’t worry — you’ll get your fix. It just might take some time for companies to work with farmers to determine how that’s going to happen, which could mean a slightly higher price point during the juggling process.