How Crowdfunding Could Change the Way We Pay for Education 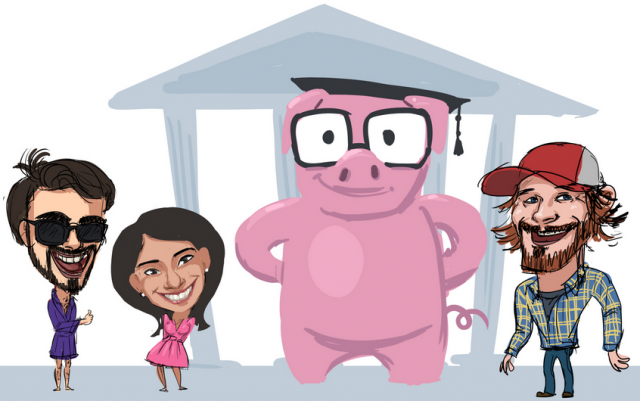 “Piglt is here to save the day (and your wallet)!” | Source: Piglt

Crowdfunding seems to be used for just about everything these days. One Virginia news station even reported on a woman who used the popular crowdfunding site Go Fund Me to help her and her husband garner the funds necessary to adopt two teenage boys from an orphanage in Ethiopia. Other weird crowdfunding projects? Well, one man, Tom Rockwell, successfully funded a project to create a comedy rap album based on the British television show Doctor Who, and another raised more than $1,000 after he created a now-infamous campaign to raise $8 to buy a chicken burrito from Chipotle. Needless to say, Noboru Bitoy, the project’s creator, was able to purchase his burrito, and then some.

So it should come as no surprise that the crowdfunding movement has infiltrated education and, in particular, educational costs. A number of crowdsourcing sites have popped up in recent months targeted to those looking to raise money specifically for educational causes, such as funding tuition or paying down student loans. Among these are CrowfundEDU, AngelDorm, ScholarMatch, and Plumfund.

Piglt (pronounced “piglet”) is perhaps the most prominent of this new crop of crowfunding startups. Piglt’s business model works much like other crowdsourcing websites. The company takes a cut of the funds that each “Dreamer” raises, and in exchange the Dreamers get to use a dynamic and safe platform for raising money.

There is something rather sad about the prospect of individuals needing to ask perfect strangers for relief from the burdens of student debt and exorbitantly high tuition. Granted, most contributors to such campaigns are friends and family both distant and close, but still, you might be wondering, have things really gotten so bad?

The answer appears to be “yes.” Research released last year indicates that the price of tuition in the United States has increased by more than 500% since 1985, and a similar article released earlier this fall claims that tuition in the U.S. has risen to a level which effectively prices out the American middle class.

According to NPR, the average college senior in the U.S. now carries $25,000 in student loan debt at graduation, and those figures rise when advanced degrees are factored in to the equation. CollegeBoard, a non-for-profit that aims to expand access to higher education, that the “average published tuition and fees at public four-year colleges and universities increased by 19% beyond the rate of inflation over the five years from 2003-04, and by another 27% between 2008-09 and 2013-14.”

But while it’s true that there is something a bit depressing about needing to turn to crowdsourcing to fund an undergraduate education, there is also something rather heartening and uplifting about it as well. If companies like Piglt succeed, collectively we could send a lot of perfectly deserving people to school who otherwise might not have been able to go, oftentimes through no fault of their own.

What makes Piglt’s model a little more complex is the fact that the site encourages a kind of skill-sharing between the campaign starters and their contributors. For example, a Graphic Design major looking to raise funds for tuition might offer free design work in exchange for the needed funds. Piglt’s founders, CEO Casey Wallace and CTO Vidya Chokkalingam, say they hope that this set-up will help to foster meaningful relationships between Dreamers and Believers. Wallace writes, “in addition to helping Dreamers fund their higher education, Piglt’s hope is that the short-term exchange of services between Dreamers and Believers will lead to long-term employment or ongoing professional relationships.”

Wallace’s idea is that the better and more creative the skill-sharing opportunities Dreamers are able to offer, the more likely they are to receive funds from Believers.

Further, Piglt has taken steps to make their platform safer than other competing and more mainstream sites, such as Go Fund Me or Indiegogo. For instance, the website requires that any campaigns devoted to raising tuition must meet their full goal amount, because universities won’t allow a student to stay enrolled unless they pay in full. Piglt also links campaigns for tuition directly to the receiving institution so that there’s no doubt as to where the money is going.

Piglt is very much a nascent company, having launched last year, so it’s hard to say how successful the “crowdfunding for education” movement will become, but it seems promising. Students and alumni have been using similar sites, such as GoFundMe, Indiegogo, and even micro-loan sites like Kiva, for years. Which raises the question: How much of a role does crowdfunding have to play in education? How popular will Piglt and its competitors become?

Regardless of the answers to these questions, it’s certainly easy to get behind Piglt’s mission. The site’s creators write that Piglt was founded with the idea that “no one should be discouraged from pursuing an education (and ultimately what they are passionate about) due to burdensome tuition costs and student loan debt.” Here’s to hoping that, maybe just maybe, crowdfunding can make a difference.