This Man’s Revolutionary Business Idea Could Change Everything

According to the U.N., approximately 40% of the world’s population lives relatively close to a coastline. Even more than that live in close proximity to rivers and lakes. Together, rivers, lakes, and the sea all offer a wide variety of conveniences, resources, and a method of transportation, making human civilization inherently tied to the water itself. As water has universally been used as a means of exploration and transport for millennia, naturally it makes a fitting tool to use for tackling some of the world’s modern problems, including poverty and medical and education issues.

The question was how to best utilize it. Well, we may have our answer.

One man is revolutionizing the way the world sees cities by bringing a bold new idea to the table. Instead of viewing the idea of cities as static, brick-and-mortar establishments, Koen Olthuis instead likes to imagine them as flexible and malleable — able to adapt to the shifting needs of its citizens. Olthuis has an architectural firm based in the Netherlands called Waterstudio, which has been hard at work creating, among other things, floating houseboats, floating hotels, and even underwater structures. But Olthuis’ true target is the persistent and widespread poverty that sits adjacent to many of the world’s waterways, and use them as a means to deliver help in the form of hospitals and schools.

His idea is called Floating City Apps, which are constructed from recycled shipping containers and built on floating, barge-like structures, ensuring that they are easily moved from place to place, depending on where they are needed. The name comes from the idea of adjusting the apps on a mobile phone according to a user’s needs; City Apps would be able to reconfigure the layouts of slums in the same way. 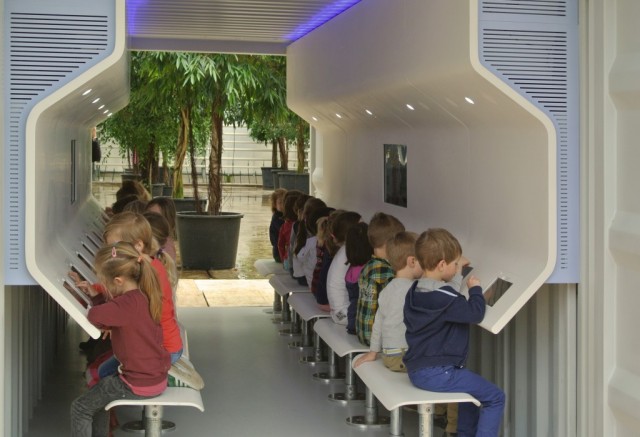 After the physical structure itself is shipped to its end destination, local licensees would then take over . “Locally the floating foundation will be built from collected used PET bottles supported by a steel frame. The City App is placed on the function a business model for payed use of the Floating City App is executed in order to get a ROI for the investors. In case of any change in situation the City App can be reused relocated or sent back to The Netherlands.”

In a nutshell, the Floating City App functions as a small business, which is built in the Netherlands and shipped to wherever it is needed. It is then licensed to a local entrepreneur until it is no longer deemed necessary or wanted.

The idea itself is a bit unorthodox, but it does set the wheels in motion for some interesting business models, and could be a very effective way to strategically build in areas of need. In fact, in a way, Floating City Apps open up a route for entrepreneurs to engage the free market in an entirely new way — by offering public services like sanitation or education to places that may be severely lacking.

Imagine a City App anchored dockside near an under-served community that offers Internet access to those who have never had it before? Or even a floating medical center after a natural disaster? The potential applications are numerous, and the idea lends a whole new way to how architects, planners, and engineers can use the topographies of certain cities.

With other factors like climate change leading to impending sea level rises, Floating City Apps may become less of an out-of-the-box idea and more of a necessity in the near future. The idea appears to have merit, and there’s really nothing standing in the way of its feasibility. There are many cities and areas across the world that could benefit from the use of floating service centers. Olthuis himself notes during his TED Talk, seen above, that cities are still built the way they were hundreds of years ago, and engineers need to find a way to take advantage of the water and the space that it provides.

“They’re flexible, they’re reusable, and can work as instant solutions,” Olthuis said of his Floating City Apps. “And they can be much more than only housing. All kinds of functions we can use (them for). Islands, floating beaches, cruise terminal, floating rotating tower, floating roads, agriculture, even a complete floating forest.”

“Almost anything you can think of can also be done on the water,” he adds.

If even a fraction of those ideas are able to be successfully pulled off in the real world, Olthuis’s idea could, in fact, be world-changing. For cities that are located next to large bodies of water and that are densely populated — think locations in Asia or Europe — entirely new neighborhoods could spring up to alleviate congestion and density.

Of all the potential applications, perhaps the most exciting concept is that of floating agriculture. If food production can be brought to dense inner cities bordering bodies of water, fresh and more affordable food would become available to those who desperately need it. Even in America, imagine the advantages a floating corn farm in an inner-city bay would bring to local residents. Granted, there are a lot — a whole lot — of factors to consider. But think of the transportation costs that could be cut out by having a food resource ten minutes away from grocery stores, rather than thousands of miles, in America’s heartland.

Olthuis’s idea certainly is bold, if not ingenious. The next step, of course, will be to see if investors jump on board and if the concept can be put to practical use. Even if Floating City Apps take a long time to gain momentum and take to the waterways of the world’s cities, it’s the kind of thinking being displayed by Olthuis that will truly help change the world for the better.

With the challenges the world’s population is set to face in the coming decades and centuries, we’ll need all the radical ideas we can muster.