How Low Can Unemployment Really Go With Obama in Office?

The unemployment rate is, all things considered, looking fairly good. The Bureau of Labor Statistics’ numbers show a sustained drop since the end of the Great Recession, and is now hovering at right around 5.4% — which isn’t bad, considering that it was near 10% in 2009 — but still somewhat disappointing. As the economy continues to gain ground, although perhaps at a slower rate, the discussion has turned from how to create jobs and get people back to work, to maintaining economic integrity and raising job quality, along with wages.

But analysts think that there is still work to do in getting people back to work, as evidenced by the still-ugly labor participation rate, which has been bouncing around between 62.7% and 62.9% for some time now. With more than one-third of Americans opting to sit out rather than work, for reasons varying from retirement to having trouble finding a job, it’s clear there’s still some room for improvement. Despite that, there’s reason to think that the unemployment rate could plummet even further, possibly below 5% by the end of the year.

In a blog post for The Brookings Institution, it’s being made clear that economists and and analysts alike not only think that the unemployment rate will continue to decline, but that they fully expect it to do so. In fact, projections put the unemployment rate all the way down to 4.5% by September, which would mark a full 1% drop in the next four or five months.

The projections were made by looking at ‘steady-state unemployment rates’ versus actual unemployment rates. The ‘steady-state’ model, according to The Brookings Institution, is “the rate of unemployment implied by the underlying labor force flows,” and already stands at 4.6%, considerably lower than the actual headline figure. Expectations are that these two rates will converge, as seen in the chart below. 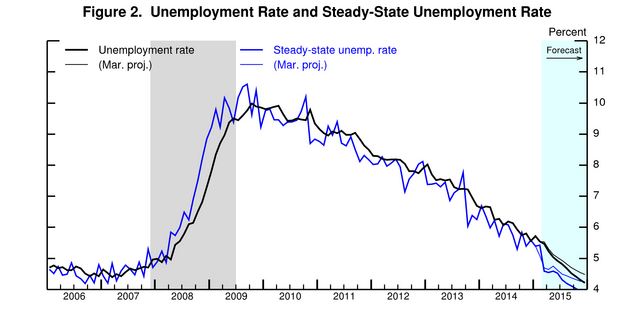 While the prospect of a 4.5% unemployment rate is definitely exciting, getting there is a whole other story. The economy, although strengthened, is still shaky, and there are still some very big concerns regarding labor force participation and long-term unemployed numbers that indicate some other underlying issues. Also, officials need to start looking at when it is expected that the economy will actually reach full employment, which is when all available labor resources are being put to full use. When the unemployment rate hits anywhere between 2 to 7%, per Investopedia, we are in the full employment range.

There are researchers who think we’ve already hit that point, but again, there is evidence pointing to the contrary. Even Federal Reserve Chairwoman Janet Yellen has admitted as such, saying, “too many Americans remain unemployed or underemployed, wage growth is still sluggish and inflation remains well below our longer-run objective.”

We also need to consider at which point we reach the non-accelerating rate of inflation unemployment, or NAIRU, where further drops in the unemployment rate actually cause inflation. There are always going to be some subset of unemployed persons in an economy for a variety of reasons, but the trick is to maintain a balance so that we’re using labor resources as efficiently as possible while also warding off inflation.

With that in mind, will a 4.5% unemployment rate — the number projected from the Brookings Institute — bring the economy to a place where inflation becomes a concern, if that level is even attainable? 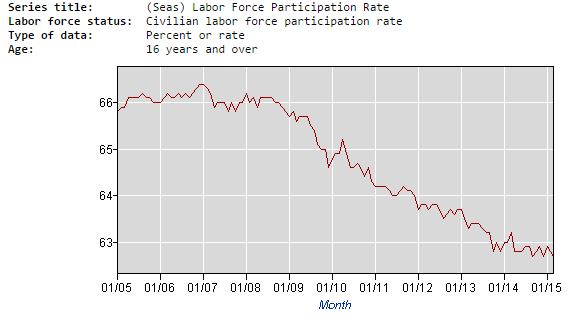 It may not be something we need to worry about at this point, because there are still other issues at hand — the long-term unemployed, and a lackluster labor participation rate among them. A look at the chart above shows clearly that Americans have turned away from the workforce over the past decade, which makes sense on some level with the tough economic stretch we’ve had. But many are not returning and because of that, our unemployment figures may be skewed.

After all, if you’re not looking for work, you’re not counted as unemployed.

Where all of this gains real importance is when we look at how our leaders will make policy decisions in order to sway the economy. If the unemployment rate reaches full employment, different decisions will be made than if it jumps back up to 6%. Those decisions can have real, tangible effects on consumers. Not only that, but with an election year coming up, the economy will likely be a hot topic once again.

With the apparent success so far under Obama’s watch, the strength of the economy should play into Democrats’ hands. If the Obama administration proved Democrats could lead Americans back to prosperity following the worst economic climate in a century, it could hurt Republicans’ chances of taking back the White House.

Getting unemployment under 5% will be a huge achievement for the Obama administration, and it appears well within reach. While his administration won’t be solely responsible, it will definitely put a giant feather in the Democrats’ hat headed into 2016.