How Low Will Amazon Shares Go? 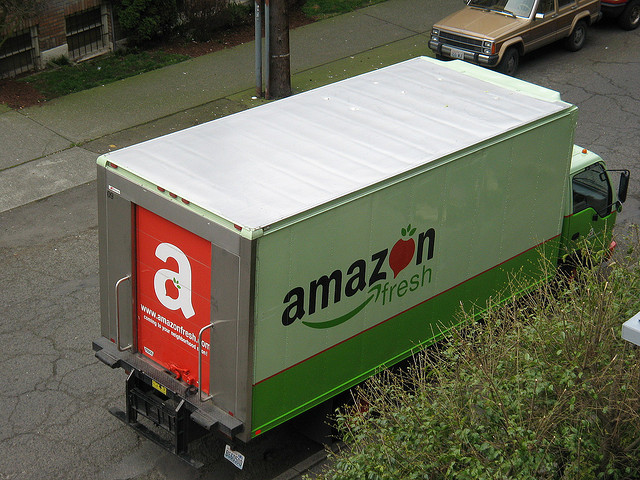 Amazon (NASDAQ:AMZN) shares have had a rough 2014 with the stock down 16 percent. On Wednesday we saw the shares break down significantly, hitting a new closing low for the year of $343/share. This is significant especially as it happened on above average volume (4.12 million shares versus a 30 day average of 3.65 million.) Thursday morning’s trade saw the shares break down again to $335/share, again on high volume. What this means is that there is likely a significant institutional seller who doesn’t mind getting a price around the low for the year.

Over the past several years, Amazon has been one of the best performing S&P 500 stocks. The only major setback was in 2008 when virtually every stock fell regardless of their fundamental drivers. Now with Amazon shares off 16 percent year-to-date, we are on the verge of seeing a major correction. While such a correction is certainly overdue — we haven’t had one in over 5 years — I would want to see the stock trade below its 200 day moving average at $338/share before I thought a correction was underway.

For those who missed the boat such as yours truly, I think we could see an excellent buying opportunity should the correction continue. Amazon is a rapidly growing retailer that dominates the e-commerce marketplace like no other company. Since there is a secular bull market in e-commerce, and since Amazon is the global leader in e-commerce,  there is a strong secular bull case for Amazon shares.

The question as I see it is not whether to buy Amazon, but when or at what price to buy Amazon? The company is extremely difficult to value using traditional metrics as it eschews profitability in lieu of growth; the company spends billions on expanding and refining its infrastructure to ensure that it remains the best e-commerce retailer in the world. Therefore, a good way to value Amazon is by looking at the company’s gross profits rather than its net profits.

Gross profits don’t count expenses relating to the aforementioned infrastructure build-up that is found in the SG&A and R&D sections on the company’s balance sheets. While I don’t expect the company to stop growing its infrastructure, I do think that eventually that this process will slow down. When this happens, we will begin to see more of the company’s reported gross profits drop down to the bottom line.

Amazon’s gross profits are growing at just under 40 percent per year, which is an incredible rate. However, growth is slowing; year-over-year, gross profit growth from 2012 to 2013 was 34 percent. This is still a great number but we have to realize that no company, especially one as large as Amazon, can continue to grow at such a rapid rate. Therefore, I will conservatively assume a gross profit growth rate of 30 percent, which is still incredible, but which is also probably closer to the reality we will see going forward. Now, Amazon trades at 7.8 times its trailing gross profits or about 6 times its forward gross profits assuming a 30 percent growth rate.

If we assume that about 15 percent of this can make it down to earnings once the company starts focusing on profitability, it trades at 39-times earnings. Note that this 15 percent figure seems low but it is accurate. Consider that the company will still spend a lot of money on infrastructure, and that it will also spend money on R&D. Given that we also have to throw in taxes, salaries, and a slew of other expenses, 15 percent seems accurate.

This is simply too high, although it isn’t astonishingly high as many Amazon bears would argue. At a 30 percent growth rate the company’s stock should trade with about a 30-price to (hypothetical) earnings multiple. This means that the shares can be purchased for the long-term at around $261/share. While this seems low for a $343 stock, keep in mind that over the past 10 years the shares are up over 700 percent. Since its 2001 bear market low Amazon stock is up 40-fold!

Massive corrections are common in secular bull markets. Too much speculative money enters these markets as they rise and they are quick to the exits because they infer that the story has changed from negative price action. A drop to $261/share would be about a 40 percent correction, which is smaller than corrections we’ve seen in companies such as Intel (NASDAQ:INTC), which fell nearly 60 percent in the 1970s before rising 100-fold.

If you have substantial profits in Amazon, you should probably take some. If you haven’t gotten long yet but believe in the story, I think it is too early. If you buy today you will probably happy that you did in 10 years, but I think you will get a much better entry point in the coming months.

Disclosure: Ben Kramer-Miller has no position in Amazon shares.